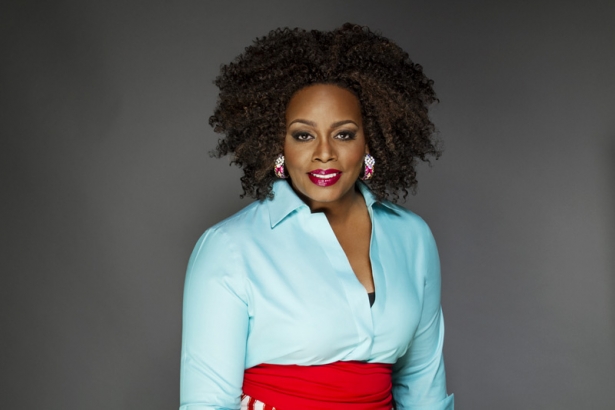 Dianne Reeves was born in Detroit, Michigan, and raised in Denver, Colorado. She grew up surrounded by music; her father was a singer, her mother played the trumpet, and her Uncle Charles (Charlie) Burrell played bass for the Denver Symphony Orchestra. Reeves began piano lessons as a child and sang at every opportunity that came her way. When Reeves was 11 years old, her interest in music was enriched by the renowned Bennie Williams, founder of Bennie L. Williams Spiritual Voices, who became her mentor and piano teacher. Uncle Charlie introduced Reeves to music icons such as Ella Fitzgerald, Sarah Vaughan and Billie Holiday. She became enthralled with Vaughan’s voice and realized then she wanted to be a singer. Her interest and love for music intensified.

At age 16, Reeves sang with the George Washington High School band in Denver and won first place at the Chicago at the National Association of Jazz Educators Convention. Reeves caught the attention of Clark Terry, former trumpeter for the Duke Ellington Orchestra, who became her mentor. Reeves eventually sang with his All-Star jazz band, and this association provided Reeves chances to sing with famous jazz legends Tommy Flanagan, Louis Bellson and Jimmy Rowles.

Reeves studied music at the University of Colorado before moving to Los Angeles, California, in 1979, where she explored Latin American and other genres of music. Her singing career took off and more breaks surfaced. In 1982, Reeves began recording as a solo artist. In the 1980s, she toured with Harry Belafonte and Sergio Mendes, respectively; and in 1987 she was the first vocalist signed to the revived Blue Note label. To date, Reeves has recorded 16 albums, received five Grammy nominations and won two Grammys. She received her first Grammy award in 2001 for “In the Moment-Live in Concert” and, again in 2015 for Best Jazz Vocal Album, “Beautiful Life.”  Admirers of “Beautiful Life” say it demonstrates Reeves’s ability to blur lines between jazz, pop, Latin and R&B, marvelously well.

Dianne Reeves is recognized as one of jazz’s pre-eminent vocalists. She is a skilled scat singer and superior interpreter of lyrics. On May 22, 2015, Reeves was recognized by the Juilliard School with an Honorary Doctor of Arts for her “breathtaking virtuosity, improvisational prowess, and unique jazz and R&B style.”

Reeves regularly performs with symphonies and orchestras around the world. Her most recent performances in Colorado were May 5, 2016, at the Newman Center for Performing Arts; August 8, 2015, at Balistreri Vineyards and, again February 4, 2015, in Aspen at the Wheeler Opera House.

Although Reeves travels and performs extensively, she resides in Denver. She returned to Denver from Los Angeles in 1992.

Wonderful to be able to learn about the things you inform us about,

Thank you for your comment. I am glad you found this blog informative.

Didn't realize she's from Denver - thanks.

Thank you for recognizing the talent that is Dianne Reeves & sharing her wonderful story with us. I am a long time ago classmate of Dianne's (both junior high & high school) and I remember us cutting up in class--having fun in those good ol' days! Indeed, I also recall her singing in our GW student talent show & she simply blew us all away with her amazing voice! Am so happy to hear she is doing well & is still in Denver, too [Dianne, you ROCK!]

Thank you for your comment. Your junior and high school years together sure sounds like good times together!

Your tremendously wonderful song about Grandma gliding to the next life so cradled and comforted me about my own grandmother and with anyone else I loved dearly, to get it confirmed that she is in the presence of All Love. I am alumni @ UCD as well. once again, Thank You Miss Dianne Reeves, you are a blessing!

Kimbra, thanks for sharing such a nice memory of Dianne Reeves's musical connection to your beloved grandmother.