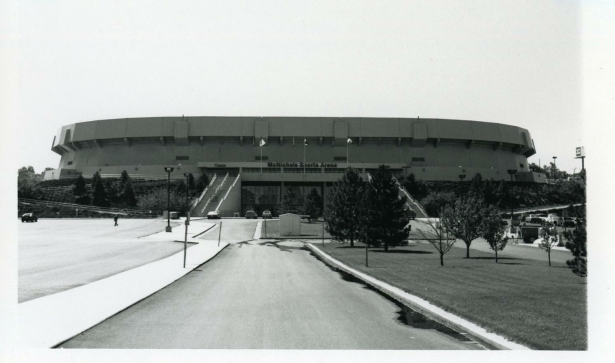 Gerard Gordeau was not a big man, certainly nowhere near the 410 pounds his opponent, sumo wrestler Teila Tuli, was packing when they entered the octagon at McNichols Sports Arena on November 12, 1993.

What Gordeau, an accomplished Dutch kick boxer, did have was a devastating roundhouse kick, which he delivered directly to the big man's mouth. The 8,000 or so fans in the arena gasped when one of Tuli's teeth went spinning out of his mouth and onto the floor.

What they didn't, and couldn't, know is that two more of Tuli's teeth were embedded deep in Gordeau's foot and would need to be surgically removed.

So went the first 26 seconds of Ultimate Fighting Championship (UFC) 1, a moment of forgotten sports history that was played out right here in Denver.

Today, the UFC is a massive business that's prepping for its 205th card and recently sold to a group of investors for $4 billion. Back in 1993, it was an outlaw event that only landed in Denver because Colorado didn't have a state boxing commission to stop it from happening at all.

In fact, UFC 1 was so low-profile that neither the Denver Post nor Rocky Mountain News even bothered to send a reporter to cover it. (Much of the information in this blog was obtained from an article that appeared in the Los Angeles Times that was written by, of all people, their TV critic.)

That's too bad, because UFC 1 was a gloriously absurd event that paired fighters from different disciplines against each other in the now-familiar eight-sided ring that is the UFC's trademark. If you've ever wondered how a boxer would fare against a Ju-Jitsu expert, UFC 1 was definitely your kind of event. It did not, however, bear any resemblance to what is known today as simply Mixed Martial Arts (MMA).

UFC 1 cut through the complexities and subtleties of the various fighting disciplines with a set of remarkably simple rules for the fighters:

Bouts would end when one fighter submitted or when a doctor or ring official judged one of the fighters too injured to continue or in the case of a knockout.

Beyond that, it was anything goes, though most fighters didn't need to stretch their skill sets particularly far to come up with a win.

For example, boxer Art Jimmerson didn't even get to throw a punch before future UFC/MMA legend Royce Gracie put him in a choke hold and ended the match at 2:18. In an effort to protect his jabbing hand, Jimmerson wore a single boxing glove for the event. Though the move didn't do much to better his chances of winning, it did earn him the nickname, "One-Glove," for the rest of his career.

In the stands, around 8,000 of the good people of the City of Denver looked on at the spectacle and, in multiple cases, made a spectacle themselves by starting their own impromptu fights. The UFC 1 commentary crew, which included NFL great Jim Brown, described the gathered mass as follows, "This is most alive group of people I've ever seen. In fact, I'm kind of scared."

In the ring, MC duties were handled by local celebrity Rich "The G-Man" Goins. Goins gained local and national fame by living on a billboard on West Colfax for 33 days while waiting for the Denver Broncos to clock their first win of the 1990 season. That stunt landed him a steady gig on 103.5 the Fox for the next 20 years.

Gracie would go on to fight another UFC all-star, Ken Shamrock, in the semi-finals in a bout that lasted under a minute. Shamrock and Gracie's rivalry would turn out to be one of the greatest in UFC history.

He and Gordeau faced off in the final bout and, once again Gracie came out on top by putting Gordeau into submission at 1:40 and taking home a prize of $50,000.

UFC 1 burned brightly for a night and then just as quickly faded away into memory. Over the years, the UFC evolved out of its outlaw mode and is now considered a mainstream sport. MMA has developed into its own, distinct brand of fighting which mixes grappling, kick boxing, and traditional boxing.

With the exception of Shamrock and Gracie, most of the fighters in UFC 1 went on to continue in their respective fighting disciplines. Despite a nasty infection, Gordeau's foot healed up quite nicely, thought there's no word on what happened to Tilu's other two teeth once they were extracted from the Dutchman's foot.

Niiiice, wish I would have been there!!!

It was really a spectacle. The DVD of UFC 1 (which is, sadly, not available from DPL - but is available from Netflix) is definitely worth tracking down. Thanks for reading and commenting!

Did this info come from the library archives?

No. When we originally planned this blog we, incorrectly, assumed that there would source material in the Denver Post and Rocky Mountain News but the local papers didn't send reporters to the event at all. Most of this material came from account that was published in the Los Angeles Times (whose TV critic watched it on pay-per-view).