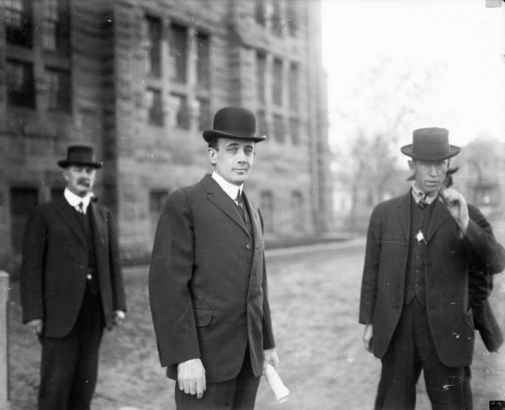 The American public has always been fascinated with true crime stories, and if that story happens to involve gorgeous society dames and handsome gentlemen, we tend to be very fascinated.

The man in the center of this picture, Frank Henwood, was in the center of exactly the kind of crime drama that Denverites of the early 20th century simply could not get enough of. (Though not identified, the men giving off the not-afraid-to-beat-you-with-a-rubber-hose vibe on either side of Henwood are likely guards from the Denver County Jail.)

Henwood was convicted (twice) of murdering Tom von Phul and George E. Copeland at the Marble Bar in the Brown Palace Hotel on the night of May 24th, 1911. Von Phul and Henwood were both vying for the affections of Denver socialite Isabel Springer. Springer, who was married to a wealthy businessman named John W. Springer, was being blackmailed by von Phul. Henwood attempted to mediate the dispute and failed miserably in his efforts.

After a series of escalating confrontations, Henwood and von Phul scuffled at the hotel's legendary bar. Henwood escalated the situation irrevocably when he fished a newly purchased revolver from his pocket and began shooting at his rival. Besides landing fatal shots on von Phul, Henwood also fatally wounded Copeland, an innocent bystander who knew neither man.

Given the high-society bona fides of everyone involved, the story and subsequent trials were big news in the Queen City of the Plains for months. During this time, Henwood became something of a celebrity in his own right and was showered with bouquets of flowers and other gifts from starstruck admirers during his stay at the Denver Jail. (Henwood used his influence to secure a comfy cell and specially prepared meals in a section of the jail known as Millionaire's Row.)

Henwood's odyssey from well-heeled drifter to (spoiler alert) paranoid convict, is told in great detail in Dick Kreck's wonderfully readable 2003 book, Murder in the Brown Palace, and is definitely worth pursuing. While we won't give away too much, it's safe to say that Henwood learned the hard way that the ability to strike a dapper pose only gets you so far once you've murdered two people at a posh barroom.

(Do you love learning about Colorful Colorado's colorful past (murders and all)? If you do, be sure to like the WHG Facebook Page and watch for new content every week.)