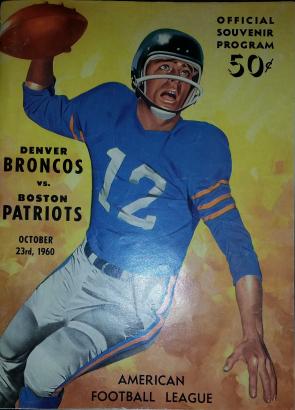 If you've lived in Denver for any length of time, you know that the Mile High City's heart belongs to the Denver Broncos. From the pre-game oceans of orange at the grocery store to the non-stop Broncos media chatter, there's no question that Denver is a football town, but it wasn't always that way.

Before the Denver Broncos were a perennial playoff participant and America's team, they got off to a rocky start.

When the team first took the field in 1960, they sported used uniforms and, as seen in the program pictured above, many of the players wore standard white socks instead of the official striped socks that were the style of the time.

The team didn't even have its own stadium during those early years. Games were played at the old Bears Stadium, home of the minor league team that provided Denver's only link to professional baseball from 1955-1992. (Sticklers for detail will recall that the team changed its name to the Denver Zephyrs in 1985 and was shipped off to New Orleans in 1993 when the Colorado Rockies brought MLB to the Mile High City.)

In 1967, Denver voters turned down a bond initiative that would have provided funds for a new football stadium the Broncos could call their own. That move didn't sit well with professional football players and the national sports media.

In a column from 1967, nationally syndicated sports columnist Melvin Durslag derided Denver voters saying, "Why in football has Denver come to symbolize Siberia?"

Durslag went on to warn that Denver's stadium failure put the city in danger of being lumped in with national jokes such as, brace yourself, Philadelphia.

"The town must watch out lest it backslide into the spot occupied for years by Philadelphia...Denver will know that it has had it when nightclub comics start babbling that the prize in their contest is one week in Denver and second prize is two weeks."

He also suggested that National League football owners weren't eager to bring their teams to Denver (which was an American League team) even though the city was, "...a good town, clean air, broad streets and a healthy attitude on nudity."

In a rebuttal published on December 11, 1967, Rocky Mountain News sports columnist Pasquale Marranzino set the record straight by pointing out that the stadium proposal was short on details and heavy on additional taxes.

Even then-Mayor Thomas G. Currigan testified in a lawsuit involving the stadium vote that he didn't really understand the proposal and only knew, "sketchy details."

Marranzino's defense of the people of Denver suggested that they were a bit more sophisticated than some LA columnist assumed. After all, this same bunch had recently approved improvement plans for Denver water and Stapleton Airport.

Of course, Denver Broncos football fans definitely had the last laugh in this story.

Shortly after the stadium vote, a group of civic-minded football fans raised nearly $2 million to make improvements to Bears Stadium, which was sold to the City of Denver and renamed Mile High Stadium.

Since that time, the American and National Leagues combined to form the NFL; the Broncos have gone on to sell out every home game since 1969; and were recently crowned, "America's Team," in a national poll.

Why, this "Little Siberia" even had enough clout to land a scrappy QB with a golden arm named Peyton Manning.

So sorry Melvin Durslag, the Mile-High City is not, never was, and never will be the Siberia of professional football.

If you're looking to learn more about the history of the Denver Broncos, come visit us at the Western History & Genealogy Department (located on the 5th floor of Denver Public Library's Central Branch). We've got a complete run of the Denver Post and Rocky Mountain News on microfilm, along with a host of other materials that tell the story of Denver's most beloved sports franchise.

"they got off to a rocky start" - I see what you did there! Awesome info - Thanks Brian