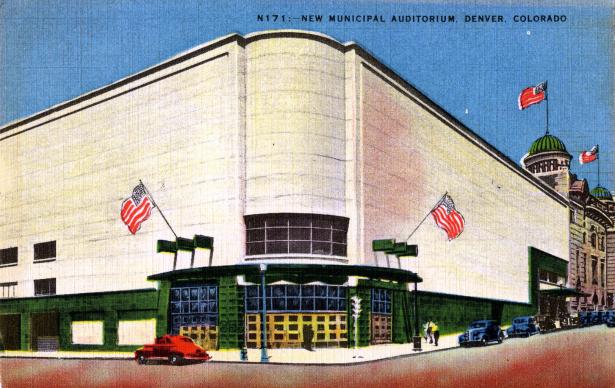 Believe it or not, Denver was Led Zeppelin’s first stop on their first North American tour.

As the late Denver concert promoter Barry Fey (1938-2013) recalled in his 2011 autobiography, he nearly passed on Led Zeppelin. When Ron Terry (agent for Vanilla Fudge) approached Fey about adding Led Zeppelin as an opener to the already sold-out Vanilla Fudge show, Fey refused. It wasn’t until Vanilla Fudge offered $750 of their own money to pay for half of Led Zeppelin’s performance fee that Fey reconsidered.

MacCluskey went on to describe the performance of each band member. While he was impressed by guitarist Jimmy Page and bassist John Paul Jones, MacCluskey had fewer kind words for singer Robert Plant and drummer John Bonham:

​Led Zeppelin returned to Denver less than two years later on March 25, 1970, and played to a crowd of 11,500 at the Coliseum. MacCluskey’s review of the band’s performance was more positive this time around, with the critic noting a marked improvement of Plant’s vocals and Bonham’s drumming.

Looking for more Denver rock n’ roll history? A great place to start is the Western History Subject Index—a large, digitized index of newspaper articles relating to the history of Denver, Colorado, and the American West. While this index provides newspaper article citations (meaning you won't be taken directly to the article of your choosing), full-text articles are available in several DPL newspaper databases or on microfilm in DPL’s Western History and Genealogy Department.

My girlfriend and I were there in 1970. Zep played for three hours. Of all the concerts I attended in the 60s and 70s, it was the grooviest!
Very groovy! Thanks for posting, Marc!
I was 13 years old and the 70 concert was my first. I sat in section ZZ and still have my half ticket. It was an incredible evening!
What an awesome memento, John! Thanks for sharing!
I sat near the front and my ears rang for a whole day after that gig. It was epic but it was loud!!
Epic indeed! Thanks for sharing, Dave!
I was at the 1968 concert and I remember the third band that performed then- Spirit, with front man Randy California. They played a great set, including their hit "Fresh Garbage". Also, the drummers from each band played extended solos, perhaps in response to Ginger Baker of rock group Cream who displayed incredible drumming some months before at this same venue.
I was also there, and it was amazing - and so unexpected since we were there to see Vanilla Fudge and Spirit.
Ditto Stephen! Holiday break 1968. The old auditorium. Wintry night. Came for Spirit. Stunned by LZ!
I remember as if it was yesterday....which is amazing in itself!!
Must have been a pretty amazing night, indeed!
Dear All, anyone of you saw the following rock gigs played in Denver during the Seventies ? BLACK SABBATH 27 February 1971 (with MOUNTAIN) and 18 October 1971. TRAFFIC, JOHN MARTYN and FREE 29 January 1973. DEEP PURPLE 3 & 4 April 1974. TRAFFIC and GENTLE GIANT 8 October 1974. GENTLE GIANT 3 & 4 February 1975 Ebbett's Field. RAINBOW and PAT TRAVERS 30 March 1981. Any memories to share ? Who knows if vintage press is available for those gigs ! Thanks for your kindly attention ! All The Best,
Poor guys did sing in our elevation. Been at concerts where singer asked the audience “how the heck do you breathe here?!”