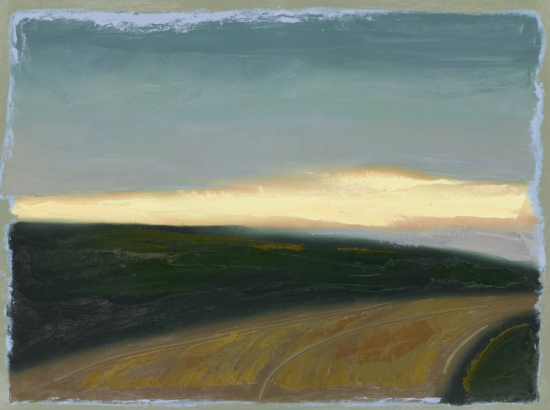 This is the third in a series of “Curator’s Corner” posts: a little peek at the history of pieces in our art exhibit, A Visual Rendezvous: the Art Collection of the Western History and Genealogy Department. Guest Curator Deborah Wadsworth will give us the backstory (and maybe some juicy details) for select pieces that are currently on display on the Central Library’s 7th Floor.

A slash of light gleams across a large painting in the corner of the Vida Ellison Gallery on the seventh floor. Contrasting swaths of dark and bright, jagged forms suggesting mountains, subtle tone-on-tone shades enrich what (at first glance) seems simple but which evolves on further viewing into textures and complexities. Ed Friedman created this work as one of a long series of meditations on the visual world, visions of the Western landscape that morph realism into abstraction.

Edwin H. Friedman was born in Los Angeles in 1948. He studied at the Art Center College of Design, which emphasized traditional materials, techniques and accurate portrayal. As Renna Shesso stated in her biography on Friedman (available in WHG’s Biography Clippings file), “entire days were devoted to drawing a head, a hand, a full human figure.” From the beginning, Friedman was obsessed with the colors and color theory that would become a critical component of his later career. In 1971, he received a Bachelor of Fine Arts with a concentration in painting.

Despite graduating, Friedman’s education never stopped. Crowded shelves of art books from Rembrandt to Warhol filled his front room. His grandfather’s exquisitely crafted wrought iron candlesticks sat on the mantle. He was as likely to discuss manuscript illumination as expressionism, pulling out a book to illustrate a point. Endlessly patient with neophytes, he’d curb an impatient tongue and hold up a colored card to show how changing one small element of a painting changed its whole balance. Speaking about one of his works he commented that “painting a snowscape like that was only an excuse” to explore those colors.

Friedman came to Colorado in 1975. Like most artists, he struggled to make a living selling his own art. With his scrupulous training, he supplemented his income by with restoring and conserving other artists’ works. He was slow, dependable, irascible, and careful. Over the years, many collectors relied on Friedman to rescue works with torn canvases or flaking paint, or merely those dulled by years of clouding varnish. In 2007-2008, he was called on to restore restored the paintings on the historic Carousel of Happiness in Nederland; colorful paintings emerged from under their shrouds of discolored varnish and holes in canvases were “healed” in his hands. Mixing colors with an unerring eye and working on his front porch to catch the strong Colorado sunlight, he demonstrated his respect for the artists whose work he delicately and accurately restored.

His own work continued throughout his conservation career. He worked mostly in acrylic, painting nudes, portraits, flowers, landscapes and studies of koi. Some of his portraits were so perceptive that the subjects hated them. The koi studies spiral down into unfathomable depths of form, texture and tone. Landscapes appear in multiple renditions, changing with the hour and the weather and his mood. His work was colorful, vivid and appealing and he built a loyal following of friends and collectors.

Friedman died from a rare neurological disease in 2011. His legacy lives on, not only in his own works but in the hundreds of paintings he rescued. The painting in the DPL collection was donated by a friend in Friedman’s memory. Like all of the Western art collection, it is now available for study by the public.

This is my favorite painting in this exhibit! Thanks so much for sharing this back story, Deb and Sarah.

Thanks, Vicki! It's one of our favorites too.

So glad to know more about the artist of this beautiful work.

Thanks, Laurie! We are so thankful to Deb for her hard work and expertise.

What a lovely treat. He just captured that moment of driving into the west in the high country as the sun starts to descend and peeks under the clouds.

Thanks for sharing, Elizabeth! It really takes you back, doesn't it.

Lovely work by Friedman. If anyone is interested in purchasing a painting by this renown artist, I have one of his oils on panel, 9 x 10. “Sopris Horizon.” billorlauren@yahoo.com. Thank you. Lauren