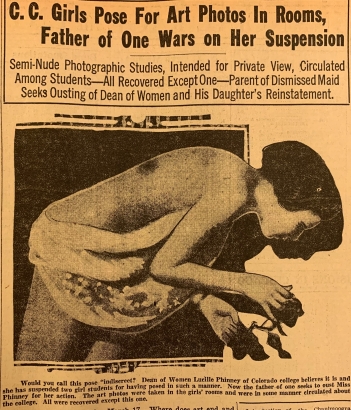 The Roaring 20s was certainly an interesting decade in U.S. history. Colorado was far-removed from the wild world of New York speakeasies, the violence of Al Capone’s Chicago, and the smoldering sexuality of Hollywood’s silent film stars. And yet, the newspapers of Colorado knew that a healthy blend of sexuality and controversy would do well for sales. And so they found a story that would fit the bill.

Enter Colorado College, a respected liberal arts institution dating back to 1874, nestled in the shadow of Pikes Peak. An article in the Denver Post from March 17, 1922, asked, “Where does art end and indelicacy begin?” The incident in question involved a group of female students who had allowed another female student to take art photos of them.

While more skin was exposed than one might expect from “polite society” at the time, the approach was much more akin to the Art Nouveau paintings of Alphonse Mucha than the pages of Playboy Magazine. Even famed Denver photographer Harry Mellon Rhoads did a strikingly similar photoshoot (note: photo contains nudity) around the same period. 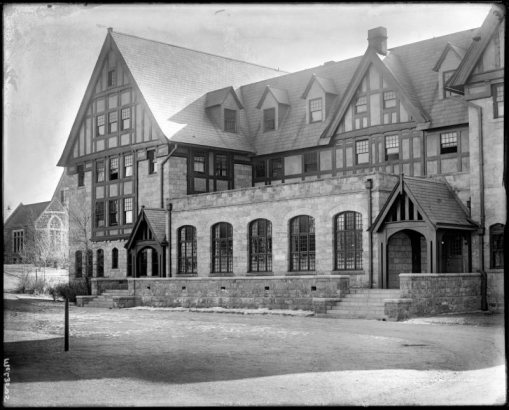 Nonetheless, Dean of Women Lucy Phinney took it upon herself to dismiss two of the students from the college. One angry father, Mr. Tubbs, went to the press, denounced Ms. Phinney, and suggested, “If my daughter had been given a hearing, and the matter discussed and investigated as it should have been, I am sure the affair would have been forgotten by now.” He also threatened to sue if the women were not reinstated.

The president of the school, C.A. Duniway, had been away in Chicago at the time. He too was outraged by Ms. Phinney’s actions and demanded she be dismissed. Phinney eventually resigned. All of the photos—except for one—were either destroyed or sequestered. The surviving image was passed along to the editor of the college annual by the aspiring photographer herself. In the words of the annual’s editor, Keith Chick, in the March 16 Fort Collins Courier:

“I had at one time the picture in my possession. It is perfectly harmless and was sent to me thru the mail. I did show it to one or two other students, a fact I now regret in view of the exaggerated rumors, but it remains that the incident is a veritable ‘tempest in a teapot.’ Other students who have seen the picture take the same attitude.” 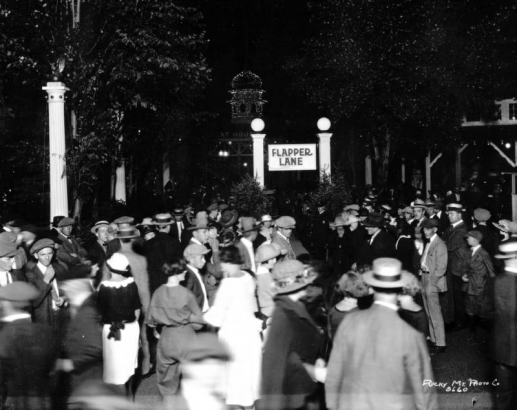 By March 29th, the Denver Post was reporting that Duniway had an increasing public relations problem of his own. Calls for his resignation had begun to rise from the student body leadership earlier that month, even before the dismissal of the two students. Their criticisms were not very specific beyond harming morale within the student body and failing to bolster the school’s endowment, so it is difficult to say how much the photo scandal contributed. Many believed Duniway's tension with the athletic department also played a role.

Regardless, the Colorado College Board of Trustees affirmed their confidence in Duniway and his tenure continued. To say students were displeased with this conclusion would be an understatement.

On March 30, 1922, a large protest took place at Duniway’s home. At around midnight, an explosion went off in front of the home. The Denver Times reported that students had contributed 25 cents each and packed $7.50 worth of explosives into a metal container that they buried in front of the main door. The protests and calls for a student strike appeared to die down rather quickly after this display of force, though no arrests were reported.

A few days later, a short blurb in the Fort Collins Courier suggested that the entire movement against Duniway began with his refusal to send the football team to an away game in Pullman, Washington. He had grounded the team because of poor academic performance amongst some of the athletes.

While much of the roar of the 20s had faded by the time its echo reached Colorado, for a brief period in Spring 1922, that changed on a small Front Range college campus. A perfect storm of sexual revolution, sports controversy, and student radicalism shocked a state, if for but a brief moment.