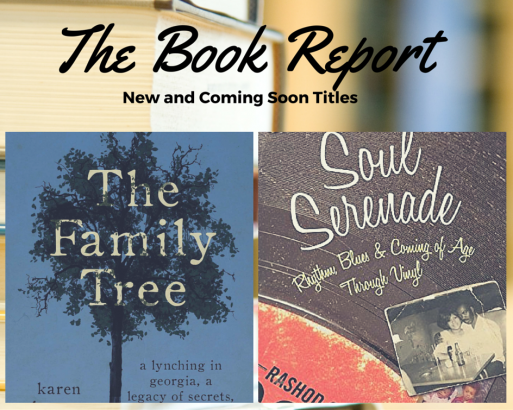 New African American Interest Books and Authors
Looking for something to read from an African/African American point of view and or written by someone from the Diaspora? Browse our list of new books available now or coming soon to the Denver Public Library. Updated monthly...check out our list for March. Book summaries provided by ProQuest Syndetics.

Featured Titles:
The Family Tree: A Lynching in Georgia, a Legacy of Secrets, and My Search for the Truth
Karen Branan

​In the tradition of Slaves in the Family, this provocative true account of the hanging of four black people by a white lynch mob in 1912 is written by the great-granddaughter of the sheriff charged with protecting them in Harris County, Georgia. A white man, the beloved nephew of the county sheriff, is shot dead on the porch of a black woman. Days later, the sheriff sanctions the lynching of a black woman and three black men, all of them innocent. For Karen Branan, the great-granddaughter of that sheriff, this isn't just history, this is family history. Branan spent nearly twenty years combing through diaries and letters, hunting for clues in libraries and archives throughout the United States, and interviewing community elders to piece together the events and motives that led a group of people to murder four of their fellow citizens in such a brutal public display. Her research revealed surprising new insights into the day-to-day reality of race relations in the Jim Crow-era South, but what she ultimately discovered was far more personal.

​A coming-of-age memoir about a young boy in rural Arkansas who searches for himself and his distant father through soul music. Growing up in rural Arkansas, young Rashod Ollison turned to music to make sense of his life. The dysfunction, sadness, and steely resilience of his family and neighbors was reflected in the R&B songs that played on 45s in smoky rooms. Steeped in the sounds, the smells, the salty language of rural Arkansas in the 1980s, Soul Serenade is the memoir of a pop music critic whose love for soul music was fostered by his father. In textured and evocative language, and peppered with unexpected humor, Soul Serenade is an original and captivating coming-of-age story set to an original beat.

Fiction:
The Summer of Me
Angela Benson

And After Many Days
Jowhor Ile

Freedom is A Constant Struggle: Ferguson, Palestine, and the Foundations of a Movement
Angela Davis

The Power of Broke: How Empty Pockets, a Tight Budget, and a Hunger for Success Can Become Your Greatest Competitive Advantage
Daymond John

The Defender: How the Legendary Black Newspaper Changed America, From the Age of the Pullman Porters to the Age of Obama
Ethan Michaeli

Been There, Done That: Family Wisdom for Modern Times
Al Roker