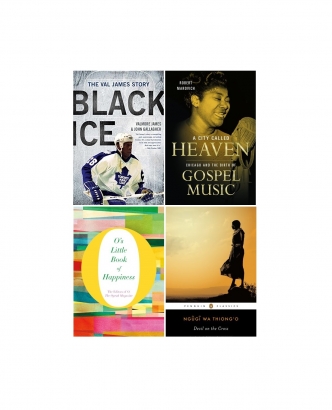 New African American Interest Books and Authors
Looking for something to read from an African/African American point of view and or written by someone from the Diaspora? Browse our list of new books available now or coming soon to the Denver Public Library. Updated monthly...check out our list for July. Book summaries provided by ProQuest Syndetics.

Featured Titles:
Black Ice: The Val James Story
Valmore James
James became the first African American player in the NHL when he took to the ice with the Buffalo Sabres in 1982, and in 1987 he became the first black player of any nationality to skate for the Toronto Maple Leafs. In his two NHL stints, James defined himself as a smart team player and opponent, known for his pugilistic skills. Black Ice is the untold story of a trail-blazing athlete who endured and overcame discrimination to realize his dreams and become an inspiration for future generations.

A City Called Heaven: Chicago and the Birth of Gospel Music
Robert M. Marovich
In A City Called Heaven, gospel announcer and music historian Robert Marovich shines a light on the humble origins of a majestic genre and its indispensable bond to the city where it found its voice: Chicago. Marovich follows gospel music from early hymns and camp meetings through the Great Migration that brought it to Chicago. As Marovich shows, gospel music expressed a yearning for freedom from earthly pains, racial prejudice, and life's hardships. In the end, it proved to be a sound too mighty and too joyous for even church walls to hold.

O's Little Book of Happiness
Edited By O, The Oprah Magazine
With a sprightly dose of insightful inspiration, a sprinkling of practical advice, and a bounty of exuberant stories by great writers, O's Little Book of Happiness features some of the best work ever to have appeared in O, The Oprah Magazine. Revisiting fifteen years of the magazine's rich archives, O 's editors have assembled a collection as stunning as it is spirit-lifting.

Devil on the Cross
Ngugi wa Thiong'o
Written on toilet paper while Ngugi wa Thiong'o was in prison, this novel tells the tragic story of Wariinga, a young woman who moves from a rural Kenyan town to the capital, Nairobi, only to be exploited by her boss and later a corrupt businessman. As Wariinga struggles to survive, she begins to realize that her problems are only symptoms of a larger societal malaise and that much of the misfortune stems from the Western, capitalist influences on her country. Devil on the Cross is an essential story of the post-colonial African experience. More books by Ngugi wa Thiong'o

And They Call Me God
Toy Styles

Nonfiction:
The Python Trail: An Immigrant's Path from Cameroon to America
Richard Afuma

Not a Game: The Incredible Rise and Unthinkable Fall of Allen Iverson
Kent Babb