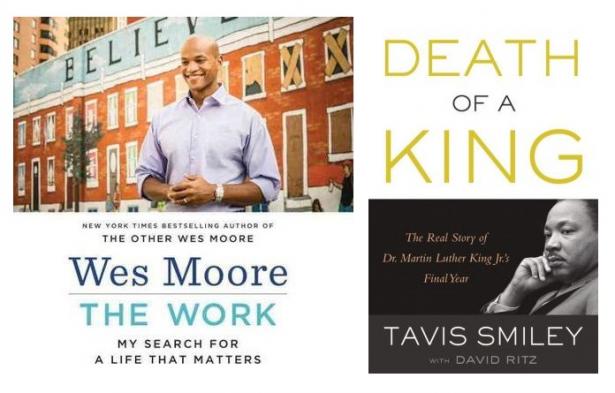 New African American Interest Books and Authors
Looking for something to read from an African/African American point of view and or written by someone from the Diaspora? Browse our list of new books available now or coming soon to the Denver Public Library. Updated monthly...check out our list for January.

Featured Titles:
The Work: My Search for a Life That Matters
Wes Moore

The acclaimed author of The Other Wes Moore continues his inspirational quest for a meaningful life and shares the powerful lessons--about self-discovery, service, and risk-taking--that led him to a new definition of success for our times. The Work is the story of how one young man traced a path through the world to find his life's purpose. Wes Moore graduated from a difficult childhood in the Bronx and Baltimore to an adult life that would find him at some of the most critical moments in our recent history: as a combat officer in Afghanistan; a White House fellow in a time of wars abroad and disasters at home; and a Wall Street banker during the financial crisis. In this insightful book, Moore shares the lessons he learned from people he met along the way--from the brave Afghan translator who taught him to find his fight, to the resilient young students in Katrina-ravaged Mississippi who showed him the true meaning of grit, to his late grandfather, who taught him to find grace in service. More books by Wes Moore

A revealing and dramatic chronicle of the twelve months leading up to Dr. Martin Luther King, Jr.'s assassination. Martin Luther King, Jr. died in one of the most shocking assassinations the world has known, but little is remembered about the life he led in his final year. New York Times bestselling author and award-winning broadcaster Tavis Smiley recounts the final 365 days of King's life, revealing the minister's trials and tribulations -- denunciations by the press, rejection from the president, dismissal by the country's black youth, assaults on his character, ideology, and political tactics, to name a few -- all of which he had to rise above in order to lead and address the racism, poverty, and militarism that threatened to destroy our democracy. Smiley's DEATH OF A KING paints a portrait of a leader and visionary in a narrative different from all that have come before. Here is an exceptional glimpse into King's life -- one that adds both nuance and gravitas to his legacy as an American hero. More books by Tavis Smiley

Nonfiction
Once Upon a Revolution: An Egyptian Story
Thanassis Cambanis

Ghettoside: A True Story of Murder in America
Jill Leovy

The Chimp and the River: How AIDS Emerged from an African Forest
David Quammen

Try Your Luck with more book, film and music Reviews and Recommendations.