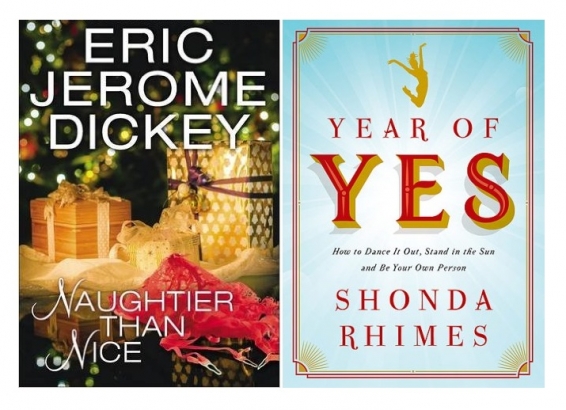 New African American Interest Books and Authors
Looking for something to read from an African/African American point of view and or written by someone from the Diaspora? Browse our list of new books available now or coming soon to the Denver Public Library. Updated monthly...check out our list for December. Book summaries provided by ProQuest Syndetics.

New York Times bestseller Eric Jerome Dickey revisits the scene of his holiday romp Naughty or Nice, featuring the McBroom sisters, whose romantic adventures make for a white (hot) Christmas. In the highly anticipated sequel we find out what happens on the other side of the fairy tale. Though the sisters are as close as any sisters could be, none wants the other two to know the dark secrets she is hiding. And during this season, all of the McBroom sisters are Naughtier than Nice. More books by Eric Jerome Dickey.

​In this poignant, hilarious, and deeply intimate call to arms, Hollywood's most powerful woman, the mega-talented creator of Grey's Anatomy and Scandal and executive producer of How to Get Away with Murder reveals how saying YES changed her life. Her iconic characters--Meredith Grey, Cristina Yang, Olivia Pope, Annalise Keating--live boldly and speak their minds. So who would suspect that Shonda Rhimes, the mega talent who owns Thursday night television (#TGIT), is an introvert? The book chronicles her life after her Year of Yes had begun--when Shonda forced herself out of the house and onto the stage, appearing on Jimmy Kimmel Live, and giving the Dartmouth Commencement speech; when she learned to say yes to her health, yes to play and she stepped out of the shadows and into the sun; when she learned to explore, empower, applaud, and love her truest self. Yes. This wildly candid and compulsively readable book reveals how the mega talented Shonda Rhimes, an unexpected introvert, achieved badassery worthy of a Shondaland character.

The Hairdresser of Harare
Tendai Huchu

The Entropy of Bones
Ayize Jama-Everett

Nonfiction:
If Someone Says "You Complete Me," Run!: Whoopi's Big Book of Relationships
Whoopi Goldberg

What Color is Your Hoodie?: Essays On Black Gay Identity
Jarrett Neal