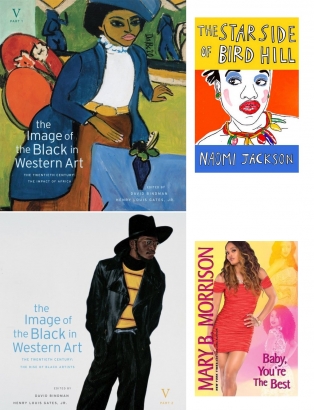 New African American Interest Books and Authors
Looking for something to read from an African/African American point of view and or written by someone from the Diaspora? Browse our list of new books available now or coming soon to the Denver Public Library. Updated monthly...check out our list for August. Book summaries provided by ProQuest Syndetics.

Featured Titles:
The Image of the Black in Western Art, Volume V, Part 1 and 2, the Twentieth Century: The Impact of Africa & The Rise of Black Artists
Editors: David Bindman and Henry Louis Gates, Jr.

In the 1960s, art patrons Dominique and Jean de Menil founded an image archive showing the ways that people of African descent have been represented in Western art from the ancient world to modern times. Highlights from the image archive, accompanied by essays written by major scholars, appeared in three large-format volumes, consisting of one or more books, that quickly became collector's items. A half-century later, Harvard University Press and the Du Bois Institute are proud to have republished five of the original books and to present five completely new ones, extending the series into the twentieth century. The Impact of Africa, the first of two books on the twentieth century, looks at changes in the Western perspective on African art and the representation of Africans, and the paradox of their interpretation as simultaneously "primitive" and "modern." The Rise of Black Artists, the second book in the series marks an essential shift in the series and focuses on representation of blacks by black artists in the West.

The Star Side of Bird Hill
Naomi Jackson

This lyrical novel of community, betrayal, and love centers on an unforgettable matriarchal family in Barbados. Two sisters, ages ten and sixteen, are exiled from Brooklyn to Bird Hill in Barbados (where the family has lived for centuries) after their mother can no longer care for them. This tautly paced coming-of-age story builds to a crisis when the father they barely know comes to Bird Hill to reclaim his daughters, and both must choose between the Brooklyn they once knew and loved and the Barbados of their family.

Baby, You're the Best
Mary B. Morrison

Blake Crystal has the best of almost everything. She's at the top of her game at work, she has four wonderful daughters, and, at fifty, she's more financially secure than she's ever been. What's more, both in and out of the bedroom, her new younger lover is taking her in breath-taking directions; a man who is expanding her social circles and her bedroom repertoire? Incredible! And well deserved too, by Blake's own reckoning. Pride comes before a fall, though, and in topical Mary B. Morrison style, one hell of a fall is coming. More books by Mary B. Morrison.

Fiction:
Only the Strong: An American Novel
Jabari Asim

Nonfiction:
Walking With Abel: Journeys with the Nomads of the African Savannah
Anna Badkhen

Yvestown in the Kitchen: A Book About Food And Living In The Kitchen
Yvonne Eijkenduijn

A Calculus of Color: The Integration of Baseball's American League
Robert Kuhn Mcgregor

We Could Not Fail: The First African Americans in the Space Program
Richard Paul

The Racial Imaginary: Writers on Race in the Life of the Mind
Editors: Claudia Rankine, Beth Loffreda and Max King Cap