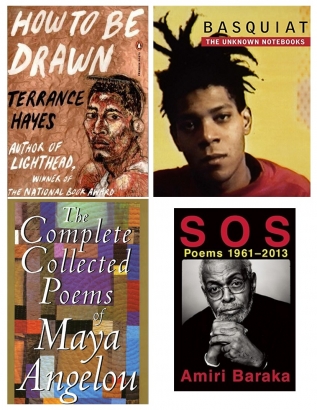 New African American Interest Books and Authors
Looking for something to read from an African/African American point of view and or written by someone from the Diaspora? Browse our list of new books available now or coming soon to the Denver Public Library. Updated monthly...check out our list for April. Book summaries are provided by ProQuest Syndetics.

Featured Titles:
How to Be Drawn
Terrance Hayes

A dazzling new collection of poetry by Terrance Hayes, the National Book Award-winning author of Lighthead. While many of these poems bear the clearest imprint yet of Hayes's background as a visual artist, they do not strive to describe art so much as inhabit it. Thus, one poem contemplates the principle of blind contour drawing while others are inspired by maps, graphs, and assorted artists. The formal and emotional versatilities that distinguish Hayes's award-winning poetry are unified by existential focus. Simultaneously complex and transparent, urgent and composed, How to Be Drawn is a mesmerizing achievement.

Accompanying a major traveling exhibition, this first-ever survey of the rarely seen notebooks of Basquiat features the artist's handwritten notes, poems, and drawings, along with related works on paper and large-scale paintings. With no formal training, Jean-Michel Basquiat (1960-1988) succeeded in developing a new and expressive style to become one of the most influential artists in the postmodern revival of figurative during the 1980s. With over 150 notebook pages and numerous drawings and paintings, this important book sheds new light on Basquiat's career and his critical place in contemporary art history.

Throughout her illustrious career in letters, Maya Angelou gifted, healed, and inspired the world with her words. Now the beauty and spirit of those words live on in this new and complete collection of poetry that reflects and honors the writer's remarkable life. Every poetic phrase, every poignant verse can be found within the pages of this sure-to-be-treasured volume--from her reflections on African American life and hardship. Timeless and prescient, this definitive compendium will warm the hearts of Maya Angelou's most ardent admirers as it introduces new readers to the legendary poet, activist, and teacher--a phenomenal woman for the ages.

Fusing the personal and the political in high-voltage verse, Amiri Baraka, "whose long illumination of the black experience in America was called incandescent in some quarters and incendiary in others" (New York Times) was one of the preeminent literary innovators of the past century. This volume comprises the fullest spectrum of his rousing, revolutionary poems, from his first collection to previously unpublished pieces composed during his final years.

Fiction:
The Boy in the Black Suit
Jason Reynolds

NonFiction:
All Eyes are Upon Us: Race and Politics from Boston to Brooklyn
Jason Sokol

Visible Man: The Life of Henry Dumas
Jeffrey B. Leak