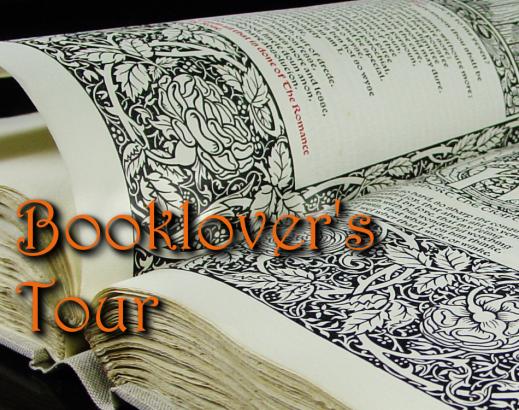 View Some of Our Prized Volumes

Here are some of our rarities, collector's items and treasures. This entry shows images of the Audubon Elephant Folio, Chaucer's Canterbury Tales by the Kelmscott Press, Dard Hunter's Literature of Papermaking, Manley Hall's Masonic Encyclopedia, an 1881 Danish Bible, an 1881 Dutch Passover Haggadah, an 1869 Book of Mormon in the Deseret Alphabet, Vesalius' 1534 Anatomy, the Gutenberg Bible, the Ortelius Atlas, and the Samuel Johnson English Dictionary. 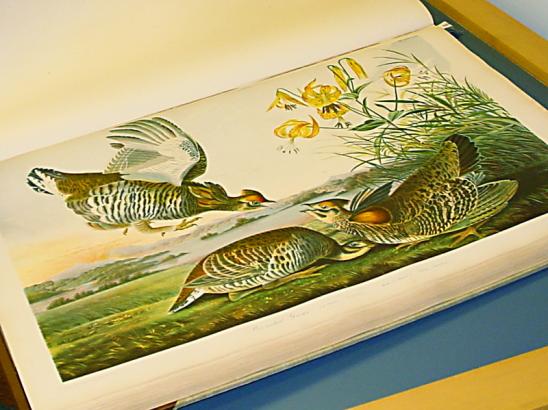 The Birds of Americais a book by naturalist and painter John James Audubon, containing illustrations of a wide variety of birds of the United States. It was first published as a series in sections between 1827 and 1838, in Edinburgh and London. 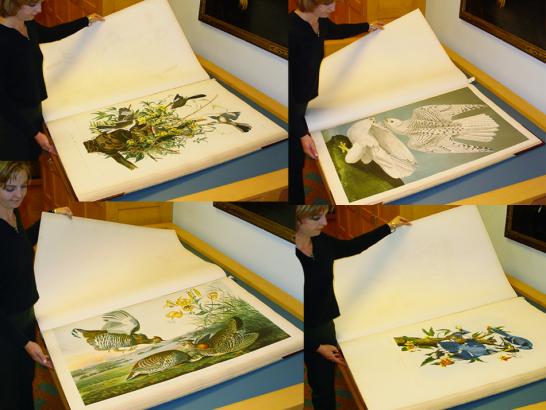 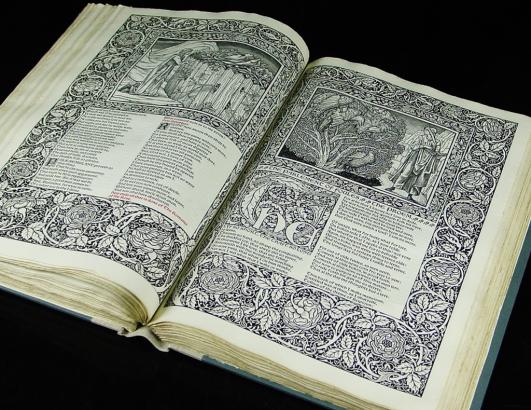 William Morris was the founder of the Arts and Crafts Movement, and for his Kelmscott Press, he designed fonts which arose out of the new ideals of the era. The rich ornamentation of Medieval printing styles was combined with modern concepts like "legibility of typeface" and "unity of the page." The Kelmscott books were also known for their fine paper, print quality, and binding.

The first line in the image above reads: "The Parlement of Foules." 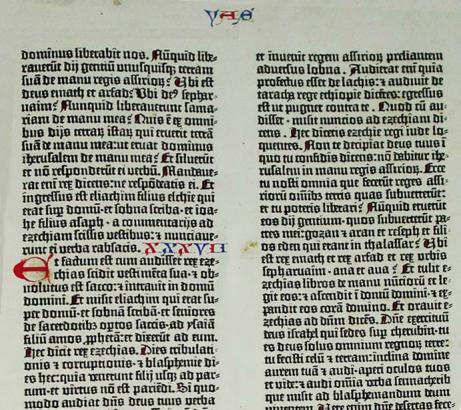 Page from the Gutenberg Bible

The Gutenberg Bible (also known as the 42-line Bible, the Mazarin Bible or the B42) was the first major book printed in the West using movable type. It marked the start of the age of the printed book in the West. Widely praised for its high esthetic and artistic qualities, the book has an iconic status.

Written in Latin, the Gutenberg Bible is an edition of the Vulgate, the Catholic translation of the Hebrew scriptures, printed by Johannes Gutenberg, in Mainz, Germany, in the 1450s. Forty-eight copies, or substantial portions of copies, survive, and they are considered to be among the most valuable books in the world, even though no complete copy has been sold since 1978, there being a big market for single pages. 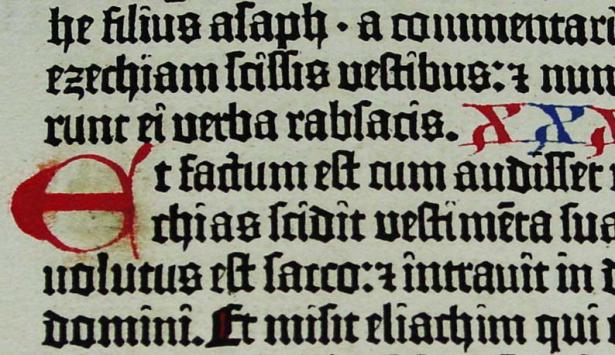 Detail from the Gutenberg Bible 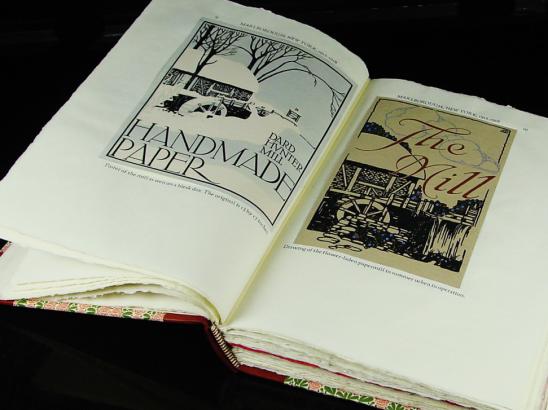 In the late 1890s Dard Hunter revived the "Art of the Book," by using 16th century papermaking and printing techniques, and was largely responsible for the establishment of bookmaking as an art form in the United States. He also played an integral part in the beginnings of the Arts and Crafts Movement, working closely with William Morris on many projects. Here's more about Dard Hunter. 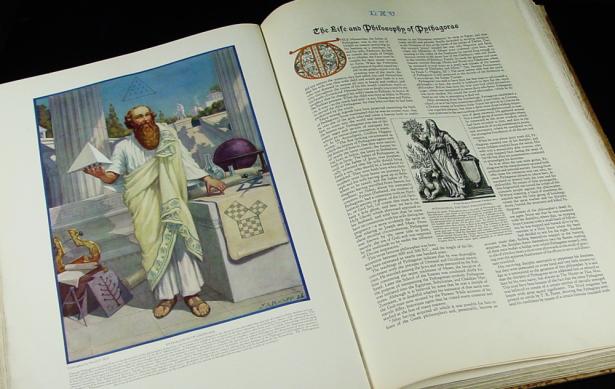 A tall (6'4"), imposing, confident and charismatic speaker who as a teenager took over as preacher of his local Church of the People in 1919, he read voraciously on "comparative religion, philosophy, sociology and psychology," and "seemingly overnight . . . became a one-stop source of an astonishing range of eclectic spiritual material that resonates with the intellect, and the subconscious. Hall was ordained a minister in the Church of the People on May 17, 1923, and "a few days later, he was elected permanent pastor of the church."

During the early 1920s, Carolyn Lloyd and her daughter Estelle—members of a family that controlled a valuable oil field in Ventura County, California—began "sending a sizeable portion of their oil income to Hall," who used the money to travel and acquire a substantial personal library of ancient literature. Hall's "first trip around the world to study the lives, customs and religions of countries in Asia and Europe," which commenced December 5, 1923, was paid for by donations from Carolyn Lloyd and his congregation.

Later in 1928, at the age of 27 years, he published An Encyclopedic Outline of Masonic, Hermetic, Qabbalistic and Rosicrucian Symbolical Philosophy: Being an Interpretation of the Secret Teachings concealed within the Rituals, Allegories and Mysteries of all Ages, which is more commonly referred to as The Secret Teachings of All Ages. 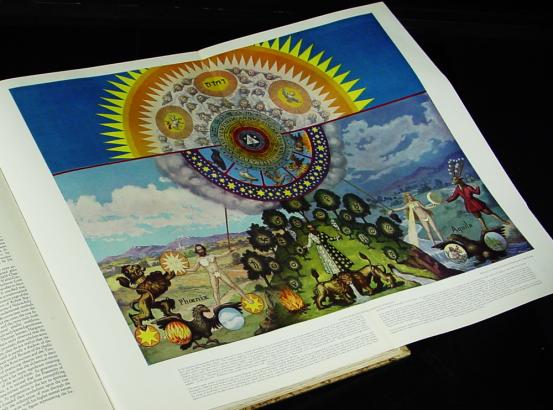 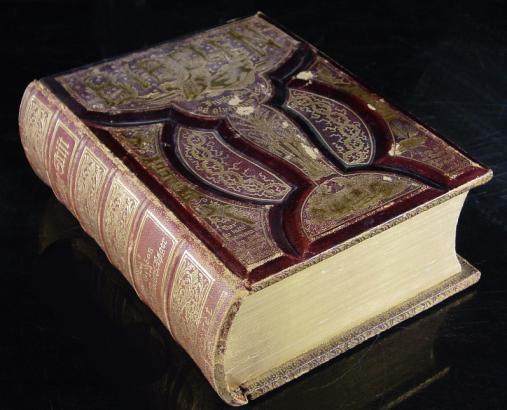 This 1880 Bible has a heavily embossed leather cover and lavish illustrations. 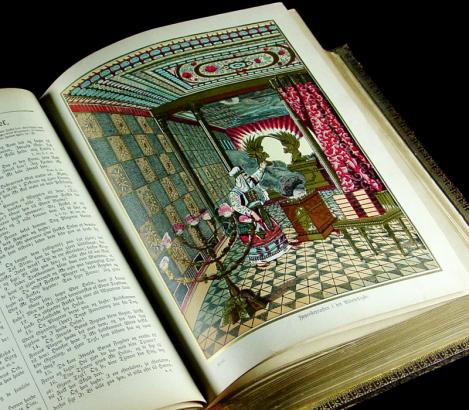 This 1881 Passover Haggadah from Amsterdam includes a map of the Holy Land. The label in the Mediterranean Sea reads: "The Big Ocean."

A 'haggadah' is the set liturgy for the seder meal on the two nights of Passover, consisting of verses from the Torah, Psalms, and Talmud, recounting the story of the Exodus from Egypt. At most seders, each participant reads a section of the Haggadah in turn, until the process is complete, with each section corresponding to a stage of the meal. 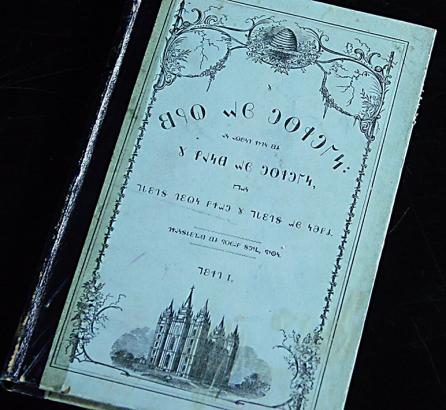 Book of Mormon in Deseret Alphabet

This 1869 version of The Book of Mormon is printed in the "Deseret Alphabet," and the title reads in part "An account written by the hand of Mormon upon plates taken from the plates of Nephi." 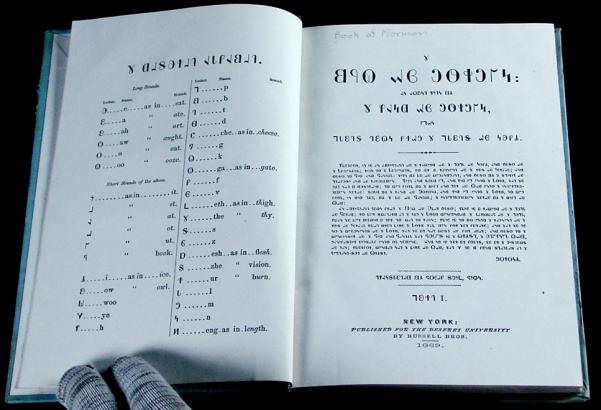 Explanation of the Deseret Alphabet 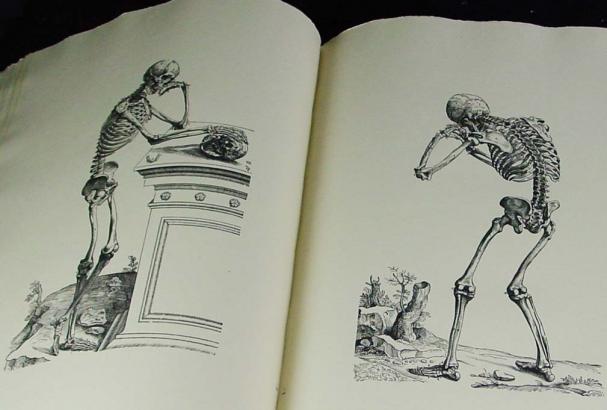 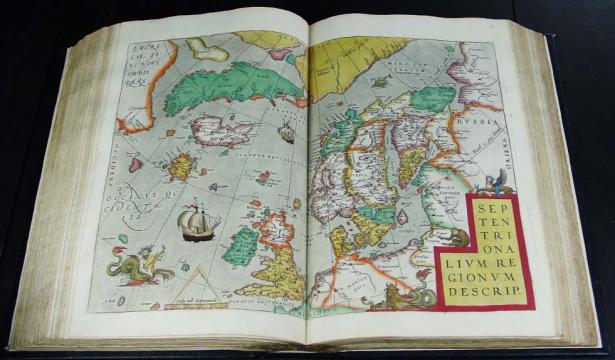 The 1597 Abraham Ortelius atlas - Theatrum Orbis Terrarum (Theatre of the World) - Thought of as the "world's first modern atlas." 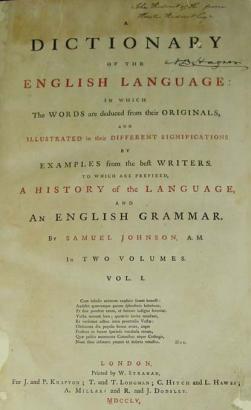 In June 1746, a group of London booksellers, dissatisfied with the dictionaries on the market, contracted Johnson to write a dictionary for the sum of 1,500 guineas, equivalent to about $350,000 in 2014. Johnson took nearly nine years to complete the work, though he had claimed he could finish it in three. Remarkably, he did it single-handedly, with only some minor clerical assistance.

Until the completion of the Oxford English Dictionary 173 years later, Johnson's was viewed as the pre-eminent English dictionary. According to Pulitzer Prize winner Walter Jackson Bate, the Dictionary "easily ranks as one of the greatest single achievements of scholarship, and probably the greatest ever performed by one individual who labored under anything like the disadvantages in a comparable length of time."

Items in this exhibit, and many other rare items are held in closed stacks in the Western History/Genealogy Department, and must be examined under supervision in the Mullen Manuscript room. Some items require an appointment to see, and if so, that is noted in the catalog record.

Great display of special items-- thanks for sharing!

Thanks, Steven - I'm glad it's appreciated because I always love to let people know about our amazing collection.