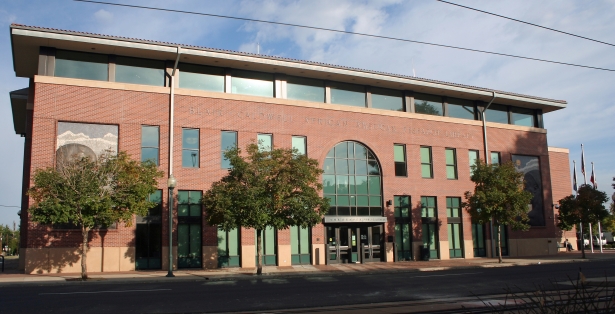 On Saturday, April 28, 10:00 a.m.-4:00 p.m., the Blair-Caldwell African American Research Library will celebrate its 15th anniversary with an Open House to the community.

We first opened our new branch to the public and began the process of becoming a full-fledged community library in Denver’s Five Points Neighborhood and beyond on April 26, 2003.

Prior to 2003, we were a small, one-room branch of the Denver Public Library in the heart of the Five Points neighborhood.  Fifteen years later, Blair-Caldwell Library has established itself as a full-service branch library, which also houses a nationally recognized museum, a collection archives, a research library, and an art/exhibit gallery. We are an educational and cultural resource for the people of Denver, Colorado, and the world. Our unique focus is to collect and preserve the history and culture of African Americans in Colorado and throughout the Rocky Mountain West.

"What makes Blair-Caldwell special is how it serves the Five Points neighborhood as a branch library, the entire city as a vibrant hub of African American community events and the nation as a research center and museum celebrating the African American experience in the Rocky Mountain West."  Michelle Jeske, City Librarian

“Blair-Caldwell Library became much more than a remarkable museum, archives and a branch library through the efforts of the people - staff, volunteers, customers - who gave us a sense of community. That community spoke volumes during the past fifteen years through jazz concerts, authors' visits, story times, genealogy programs, research, and extending a sincere welcome to all who walk through its doors,” Jim Kroll, Manager, DPL’s Western History & Genealogy and Blair-Caldwell AAR Library

Our branch is named for two esteemed Coloradans Omar D. Blair and Elvin R. Caldwell. Both men were highly committed advocates for the Denver African American community, and they made a difference in the lives of many people in Colorado. In 1973, Omar D. Blair was the first African American to be elected president of the Denver Board of Education. He is best remembered for helping dismantle segregation in Denver public schools. He served 12 years with the Board, including a four-year term as president. During World War II, Blair reached the rank of captain with the famed Tuskegee Airmen of the 332nd Fighter Group. The Tuskegee Airmen were the first African American military aviators in the United States Armed Forces.

In 1955, Elvin R. Caldwell was elected to the Denver City Council. He was the first African American to serve on a city council west of the Mississippi River. Caldwell’s 28-year tenure with the Council also included a five-year term as president. Caldwell played a key role in effecting change throughout Colorado in matters of housing and economic development, discrimination against people of color on the golf course and in the Denver fire and police departments. He was also an advocate for children around Colorado. He helped to establish the Eastside Neighborhood Health Center and the Five Points Community Center.

Our branch library is a 40,000 square foot building, which was designed by Denver’s OZ Architecture and Harold Massop Associates Architecture, P.C.

Some Blair-Caldwell Library highlights include: