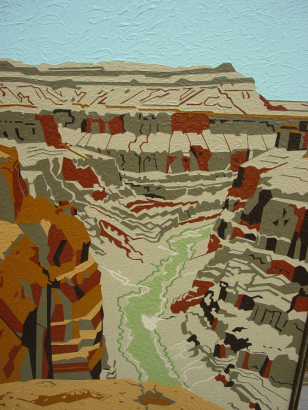 “Basically, I paint the American way of life, with views of its countryside, culture and its people.”

Burnis Calvin Day is a Detroit, Michigan-based artist whose painting “Colorado River” (1984) was, for more than 25 years, the only artwork by an African American artist in the DPL Western Art Collection. The painting depicts an aerial view of the Colorado River as it winds its way through the banded hills of the Grand Canyon. The painting was created in an original and distinctive technique that the artist calls “Neogeometric.” 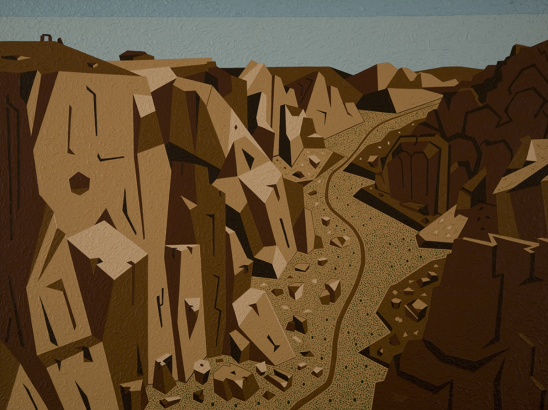 Day was born on December 27, 1940, in Hepzibah, West Virginia.  After graduating from Oak Park High School in Oak Park, Michigan, he became interested in becoming an artist. Day initially wanted to attend an out-of-state school, and preferred one in California, but his former principal at Oak Park High School wisely advised him to “…take a class or two first to see if art is what you really want to do before moving to another state.” Day initially enrolled as a part-time student in the Society of Arts and Crafts, now known as the Center for Creative Studies, College of Art and Design. Later in 1967, he transferred and enrolled as a full-time student at Oakland Community College School of Art in Bloomfield Hills, Michigan (Associate of Applied Science Degree 1969).

After Day’s first exhibition at Oakland Community College, he was encouraged by the reception of his work that he entered his first national competition with the World of Design in Connecticut. During the next five years, he furthered his studies with private lessons from two established artists. It was also during this period that he was creating artwork for his first one-man show at the McGregor Public Library, near Detroit in Highland Park in the summer of 1972.

Day paints in the Neogeometric style:

"[M]y original style of painting called “Neogeometric”, uses lines, creative imagination, geometric forms, and a strong artistic background. I feel I can take any realistic situation and draw it into a successful geometric design, using various mediums for the finished or unfinished work. My universal style, for the most part, is considered contemporary, but upon closer scrutiny, it will be recognized that I am employing the builder’s principle, which is geometric design. Geometric symbols are as old as man’s ancient existence. It is the way in which I use these geometric symbols that gives my paintings an air of being contemporary. My feeling is that this geometric concept is relevant, as it is basic and a part of our everyday life. It can be found everywhere." 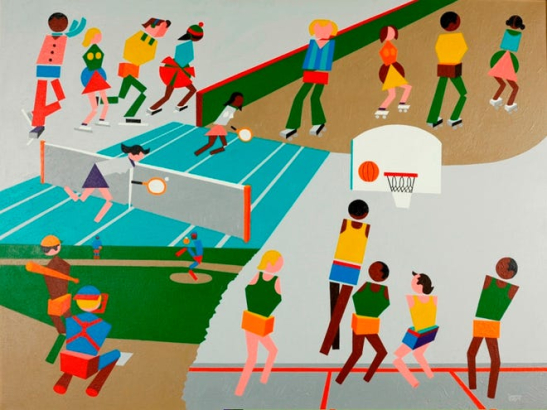 In “Pastime Sports” (1976), Day created a lively image of young people playing different sports and engaging in seasonal recreation. Working in an abstract style with geometric forms and broad planes of color, he portrayed groups of figures playing basketball, tennis, and baseball in the center and foreground. At the top left of the work, individuals are depicted ice- and roller-skating.

Day originally developed the theme of this painting for a mural competition sponsored by the Detroit Parks and Recreation Department. By 1978, the 13 x 16-foot mural was installed at the Maheras-Gentry Recreation Center, Detroit (closed 1999). In relation to the composition’s intended communal setting, its subject conveys a sense of optimism and interracial cooperation. 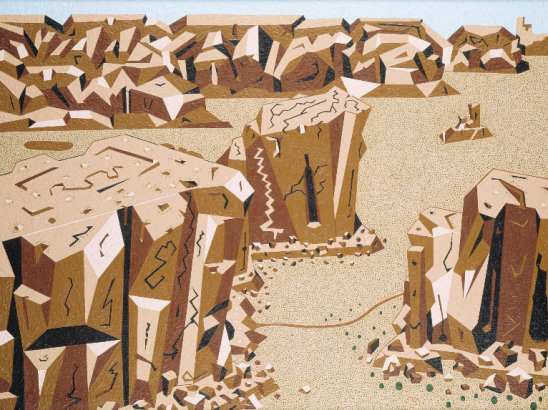 Acrylic on canvas; 30 x 40 inches; Gift of The Friends of African Art, 1987; https://www.dia.org/art/collection/object/monument-valley-42198
Monument Valley (1985), Collection of the Detroit Institute of Arts

Day has participated in exhibitions at the Detroit Institute of Arts, the New Mexico Art League in Albuquerque, and the New England Art Institute (formerly in Brookline, Massachusetts, closed in 2017). After first teaching at Pittman’s Gallery, Inc., in 1973, Day later served as an instructor in drawing, painting, and mixed media at different arts institutions throughout Michigan.

In addition to his painting in the DPL Western Art Collection, Day has artwork in the collections of the Detroit Institute of Arts and Detroit Public Library, the Utah Museum of Fine Arts, the Museum of Fine Arts-Washington County (Maryland), and the New Mexico Highland University (Las Vegas). Private collections holding work by Day include those of Oprah Winfrey, Phil Donahue, Sally Jesse Raphael, and The Chrysler Corporation. 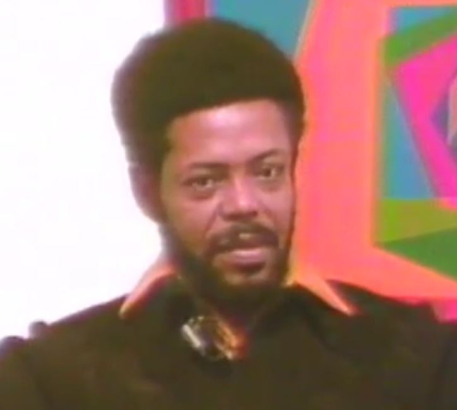 Screen capture of Burnis Calvin Day in Through the Artists Eyes

In 1981, Day was interviewed for the Detroit Black Journal program, “Through the Artist Eyes.” The show focused on showcasing black artists, including Walter Morgan, Burnis Day, and Aaron Ibn Pori Pitts. The interview has been digitized and is available online: Through the Artist Eyes, © Detroit Educational Television Foundation, 1981.