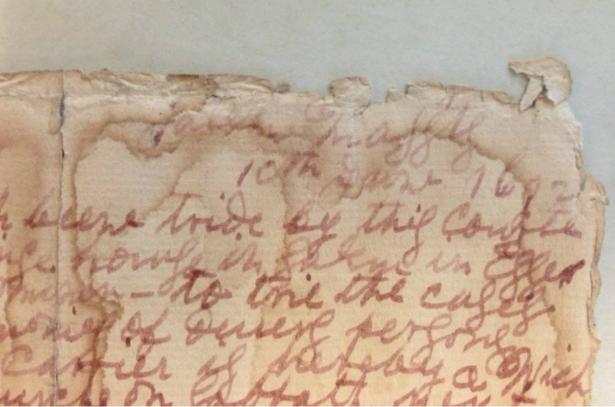 Guilty of Witchcraft or Fraud?

In the archives of DPL’s Western History and Genealogy Department lives a Salem, Massachusetts court order to Sheriff George Corwin declaring Martha Currier a witch and condemning her to be hanged (C MSS -M1429). It is dated June 10, 1692.

In 2005, the American Antiquarian Society’s Common Place published an article by Steven Biel, now Executive Director of the Humanities Center at Harvard University. The article, titled “Brother, Can You Buy a Salem Witch Death Warrant?” describes a morning in October 1932, when Captain E. Newman Bradley, an antiques dealer down on his luck, knocked on the door of A. B. MacDonald, a feature writer for the Kansas City Star and collector of Americana. Bradley told MacDonald his sad story. Bradley was a World War I veteran whose antiques business had dried up during the Depression. He had traveled to Kansas City from Houston for the promise of a job—upon arrival, however, he found the position already filled. On top of that, he had just been informed of his wife’s death via telegram.

Bradley offered MacDonald an opportunity to purchase the death warrant of Elizabeth How (a woman found guilty of witchcraft and hanged in Salem, Massachusetts, in 1692) at the deeply discounted price of $20—thousands of dollars below its value. MacDonald bought the document and then tried to sell it to other collectors, including Howard Corning, secretary of the Essex Institute in Salem. Upon studying the How death warrant, Corning concluded it was a forgery.

How did Corning know the How death warrant wasn’t real? The ink on the document was modern and the staining on the paper appeared unnatural. Corning compared the How warrant to a facsimile of the well-known death warrant of Bridget Bishop and found the wording and handwriting different. In addition, the forged How warrant had curiously been signed by well-known Puritans of the time, while the Bishop warrant had been signed only by William Stoughton. In addition, the forged 1692 How document had been signed by Wampanoag Chief “King Philip” Metacomet, despite the fact that he had been killed in 1676.

As it turns out, “Captain Bradley” scammed not only MacDonald, but several collectors in Kansas, Wisconsin, Illinois, Oklahoma, and North Carolina. In November 1932, Corning began warning collectors of Bradley and the forgeries circulating throughout the South and Midwest.

The exact origin of WHG’s Martha Currier death warrant remains unknown as documentation of its acquisition is not available. Examining the document, however, several similarities to the forged How document are apparent. The handwriting and staining patterns match, and like the forged How warrant, the signatures of several Puritan “celebrities” including Cotton and Increase Mather are present. Then there is the date—just like the How death warrant, the Currier death warrant is dated June 10, 1692. Although Bridget Bishop had been executed on that day, there hadn't been any trials on June 10, 1692, as Professor Bryan F. Le Beau points out in “The Carey Document: On the Trail of a Salem Death Warrant” (Early America Review, Summer 1997).

With so many similarities to the forged How death warrant, it is believed that WHG’s Currier death warrant is likely to be the Depression-era work of “Captain E. Newman Bradley.”

[Note: “Martha Currier” is believed to be Martha Carrier, who was executed in Salem on August 19, 1692.]

I have the Carey Document. Fake or not, its a cool conversation peice
Me too lol. Says to George Corwin. From Wm Stoughton with a wax seal
Intertaining Paragragh