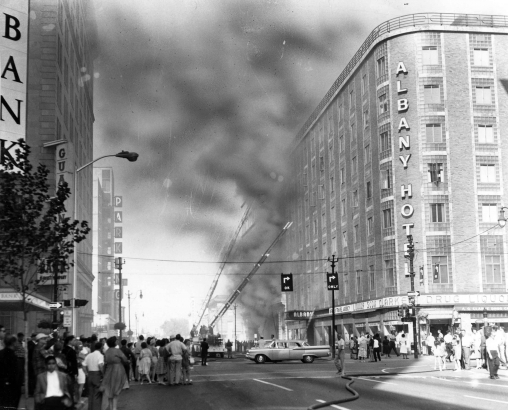 A four-alarm blaze, in which one person died and more than 50 were injured, consumed the Albany Hotel in downtown Denver on September 2, 1962. The fire at the landmark hotel, located at 17th and Stout, raged out of control for over four hours. The fire, which at the time was deemed the worst Denver hotel fire of the century, destroyed the first two floors, the mezzanine and the basement of  the old section of the hotel. The new section, fronting 17th St., suffered only minor smoke damage. Unfortunately, one hotel employee died in the fire, a waitress from the hotel coffee shop. She was found in the dressing room lounge of the women employees' basement restroom.

More than 150 firemen, which included reserves and auxiliary firemen, used 26 pieces of equipment to battle the blaze. Fire Chief Allie Feldman reported that the fire was "one of the worst Denver hotel fires in history." The supply of oxygen for the firefighters quickly dissipated due to the thick black smoke. Many firefighters stumbled from the thick smoke coughing, eyes watering, and some even collapsed on the street. A rapid call to nearby fire units brought more oxygen and equipment to the scene. The smoke of the fire cast a black pall over a four-block area of downtown Denver. The fire and smoke were very intense, as evidenced by the comments of several Denver firefighters: "It was so black in there, you couldn't see a foot in front of your face," and "We couldn't get to the damn thing." (Rocky Mountain News, September 3, 1962)

Hotel guests in the 330-room hotel managed to escape, though three people in two elevators were trapped for a brief time, until they were rescued by firefighters. No panic was reported among hotel guests, and many were led out by hotel maids. Interestingly, several guests were rescued from upper floor rooms on fire ladders, and they refused to leave their rooms until firemen arrived. The fire apparently began in a basement dressing room.

The part of the hotel hardest hit by the fire was the older part of the hotel, constructed in 1912. The Albany has a long history in Denver. Originally opened in 1886, it was well patronized by gold seeking miners, cattle barons, businessmen, and later convention-goers. Business was so brisk that it had to expand in 1906, 1912, and finally in 1967, when it was renovated, in which it became the "New Albany," with 330 updated guest rooms, very large rooms for the times, built when mansions atop Capitol Hill were in vogue. Ultimately, the hotel was closed, demolished, and replaced by an office building in 1976. See our Abany hotel blog for more information about the history of the hotel. 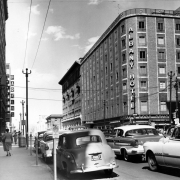 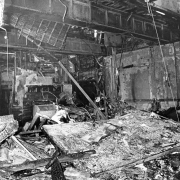 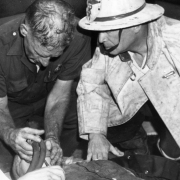 I was confused by this about the "New Albany" because this says it was built in 1967. That wouldn't jibe with either the architectural style of the building or the photo here of the hotel in 1956. I read the Albany Hotel blog and found that it was actually built in 1938.

In the 1967, the "New Albany" was actually a renovation, not necessarily an expansion. The advertising literature of the times, when it was renovated, called it the "New Albany". Sorry about the confusion and I will update the blog.

Wow, this is a very interesting article. I've been looking for information on the Albany after finding a spoon/bottle opener from there rusted out in the desert years ago. Now I know the history of where it came from!

Wonderful Ginger! I'm glad you enjoyed the article. There is a lot of Denver history, to say the least, and it looks like you have a small memento of it.

The pic on the left under where it says Photo Gallery can be dated to 1956. It's misdated 1948-55. The older parked car, left foreground has a '56 license plate, and the newish bi-color car in the center is a '56 Hudson.

Hi Steven,
I'm seeing on the Photo Gallery page and on the photo of the cars, that the title is Albany Hotel, 1956. I don't see anything about 1948-55?
Thanks,
James