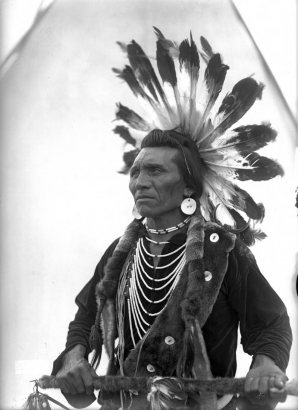 One of the Denver Public Library's treasures is a set of glass plate negatives taken by Edward H. Boos on the Flathead Indian Reservation in the Flathead and Missoula valleys of Montana in 1905. These negatives, according to Western History Department legend, had never been developed or printed since acquired, in 1938, until they were scanned in about 1995. Prints were made from the scans, and sent to the Reservation to get first hand information from the descendants of the people in the photographs for our catalog records. The Boos images were some of the first in our Digital Collections, when we were pioneers in the field, back in 1995. 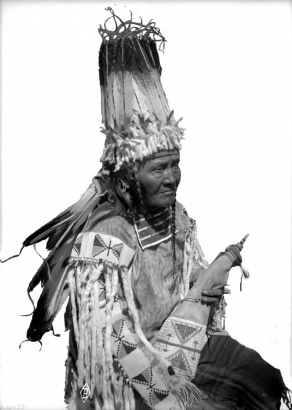 Edward Boos was born in Kentucky on April 1, 1877. His family moved to Helena, Montana, while he was in grade school, and he completed High School there. He attended the University of Montana in Missoula, Montana in 1896, and after that, followed his father's interest in publishing, working as a freelance correspondent for several newspapers in the Missoula area.

Boos' talent for reporting and taking pictures received national and international recognition when, during the summer of 1897, he accompanied the U.S. Army 25th Infantry (African American) Bicycle Corps on its experimental overland trip from Fort Missoula to St. Louis, Missouri. The company traversed 1,900 miles over difficult terrain and through taxing weather conditions in an attempt to prove that bicycles could replace horses for troop transport and reconnaissance. Boos submitted accounts of the expedition as they traveled. His accounts were prepared for the Daily Missoulian, but some were also published by newspapers along the route and a few were subsequently reprinted by national and international newspapers.

After the Bicycle Corps expedition Boos continued to produce photographs for western Montana newspapers. Sometime around 1900 he purchased his own camera and began photographing people and landscapes in the Missoula and Flathead valleys. Boos was particularly interested in recording life among the Kootenai, Salish and Pend'Oreille families of the Flathead Reservation as the 20th century began. He conducted a series of photographic portrait sessions at various sites across the reservation, mostly completed between spring and fall of 1905.

According to a 1935 newspaper story, many of these portraits were developed at night under a canvas cover so the photographer could share the portraits directly with his subjects. Throughout the time period Boos continued to photograph landscapes and events in the Missoula and Flathead Lake areas. In 1906 Boos accepted an advertising manager position with the Missoula Mercantile Company (MMS) and married Annie Hammond, cousin of MMC co-owner Andrew Hammond. Edward Boos ended his newspaper work but continued to periodically take photographs

Boos remained with the MMC for the next thirty-one years. In September 1935 an "Indian Jubilee" celebration was held in St. Ignatius, Montana. This event was the first public exhibition and print sale of Boos' Flathead Reservation portraits. Edward H. Boos died of a heart attack on September 26, 1937.

The Boos legacy, that we currently know of, is a scant 305 images - the Denver Public Library has 131, and the University of Montana, Missoula, Special Collections, has 174. Yet this small body of surviving work, fewer images than many of us have on our mobile devices, captures incomparable glimpses into a long vanished world. Looking into the faces of the people in these photos is to look into primeval history, tinged by the pathos of a lost way of life. 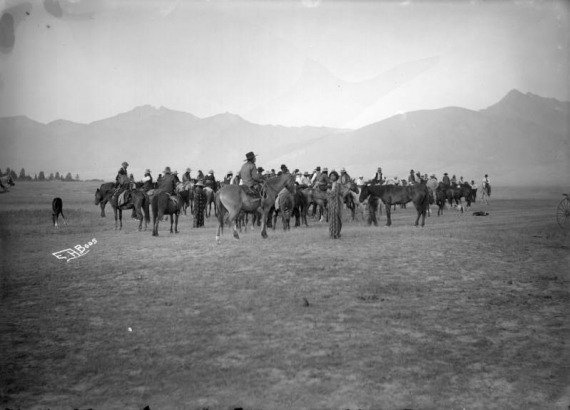 The Library acquired our Boos materials directly from his widow, in 1938, through arrangements made by Walter McCleod of the Missoula Mercantile Company where Mr. Boos was employed. The quality of the images varies widely; some, especially the portraits, are incredibly clear, with resolution allowing deep magnification. In a couple of these pictures, it is possible to zoom in to see the individual hairs in a fur garment. The other, average, or even blurred images attest to the technical challenges confronted by the photographer at that time: long exposures, heavy equipment and supplies, the necessity of a darkroom and chemicals for development - daunting challenges surmounted by a precious few.

The only information we have about who helped identify the photos is few handwritten notes on photocopies of the prints that say: "Harriet W. 8/22/96." Most of these notes identified individuals in the photos, but a few provided fascinating hints about ancient customs, as in the mention of having temporary trees in the campground, in this photo. When this additional information exists, it is transcribed exactly in the note field with no attempt at interpretation on the part of the cataloger.

Peruse our collection of Boos photos online here, or find out about the Boos photos held at Archives and Special Collections, Maureen and Mike Mansfield Library, The University of Montana-Missoula, and of course, enjoy our gallery below. 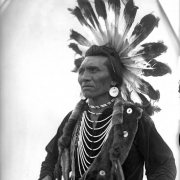 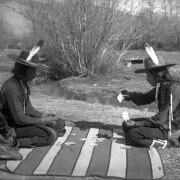 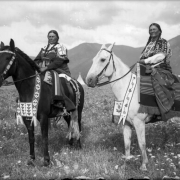 Very interesting photographs. I don't know if he is a relative or not. Our Philip Boos and family came to the USA in 1858 from Prussia.