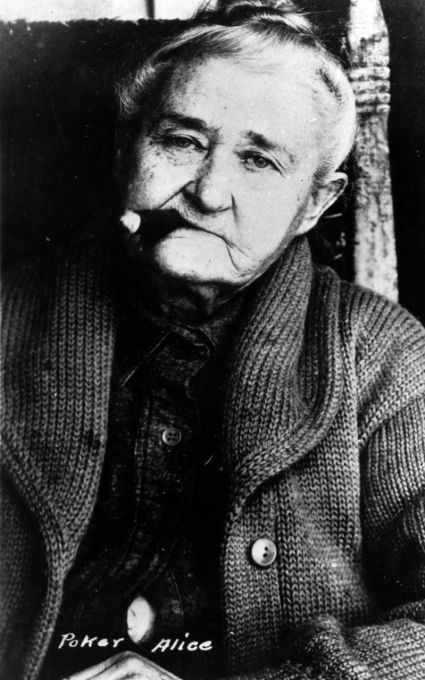 Poker Alice was a strong, independent woman at a time when women had few options in life. 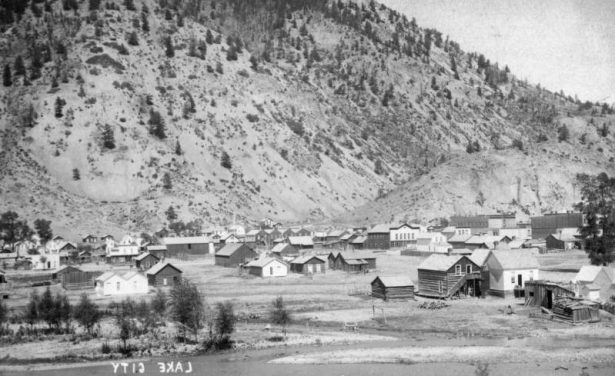 When studying the lives of Old West characters, it's hard to determine what is truth and what is fiction since these individuals often told wild stories about themselves. Other people told wild stories about them, too, and there are few solid documents to prove facts. Much of this biography is taken from Poker Alice's own words. According to Alice, she was born in Sudbury, England, on February 17, 1851. Her father was a local schoolmaster. Alice's family then moved to the eastern United States where she was said to be educated as an upper-class lady. As a young woman, she married a mining engineer named Frank Duffield. Together, they moved to Lake City, Colorado, where Frank worked in the mines.

Alice took quickly to life in the Wild West. She carried a gun, smoked cigars and played poker in gambling halls. This behavior would have been unheard of for most "respectable" women in the places Alice had grown up in. Sadly, it wasn't long before her young husband was killed by a dynamite explosion inside the mine. Forced to make money on her own, Alice became a professional gambler and worked as a dealer in gambling houses. 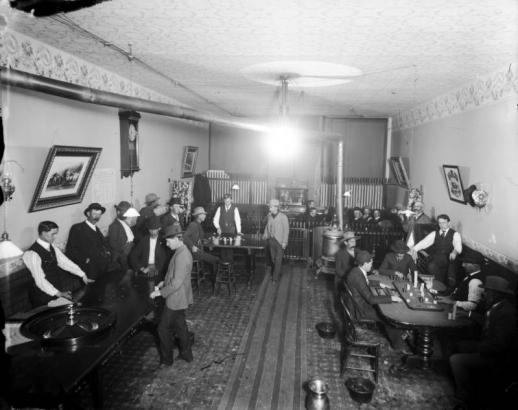 Around 1880, Alice traveled by train to Buena Vista, Colorado. Eventually, she made her way up to the booming mining town of Leadville. At that time, Leadville was filled with miners, money and places to gamble. By 1880, it had about 15,000 people, a famous opera house that hosted well-known performers and 82 saloons. It was the perfect place for Alice to make some money. She claimed that one reason for her success was her unusual "poker face." While most women of the time were expected to smile often and show emotion, Alice would chomp on her cigar and show no emotion whatsoever. Gamblers pride themselves on not showing how they feel because it might let other players know if they have winning or losing cards in their hand.

After a few years in Leadville, the mines began to dry up and Alice moved on to the next boomtown, Central City. She would often be paid by gambling houses to work as a card dealer for several hours per day. When she wasn't working, Alice would go to other establishments and gamble on her own. She prided herself on never cheating as that would have taken the fun out of the game. She also gave interesting descriptions of these gambling halls, which are nothing like the fancy casinos in places like Las Vegas that we might picture today.

...it often was (built) of logs, with a sawed floor for dancing, a bar at one side and games placed where there could be the best light and the most opportunity to play.

It appears that sometime during the 1880s, Alice moved to the growing town of Georgetown, Colorado, where she gambled. She also likely made the short trip to Silver Plume to gamble. Around this time, Alice claimed to have made trips for gambling opportunities in Trinidad, Alamosa and even Oklahoma. Along the way, she met other well-known gambling women with names like Madame Mustache, Poker Nell, China Mary and Bowlegged Mary. By 1890, Alice was headed back to Colorado to explore new boomtowns. 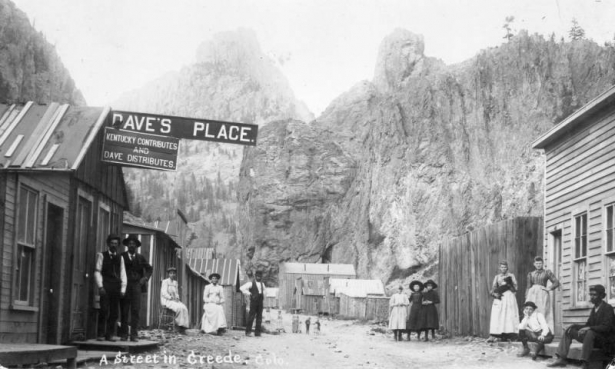 It was 1891 when Alice, nearly 40 years old, made the tough journey over the San Juan Mountains to the new mining town of Creede, Colorado. Throughout that year, people poured into town, and gambling tables were even set up in the streets. By the end of the year, the former head of the D&RG Railroad (David Moffat) completed a rail line into Creed, and Creede soon had a busy railroad station. The town continued to grow and a town of equal size, named Bachelor, sprung up on the mountain beside Creede. Alice often traveled up to Bachelor to gamble. She also met interesting characters such as Soapy Smith, who had been driven out of Denver for his criminal activities and ended up a local crime boss in Creede. One of Soapy's criminal plans involved stealing a profitable hoax called, "the petrified man."

Alice also became friends with a man named Bob Ford. Bob ran a saloon out of a tent and Alice would deal cards there. Unfortunately for Bob, he was also known as the man who shot Jesse James. Jesse James was an outlaw, but he also had many friends. According to Alice, she saw Bob having a drink in his saloon one evening when a man came in and shot Bob dead. This didn't change her mind about living in Creede, however, a fire destroyed much of the town in 1892, and she decided to move on. 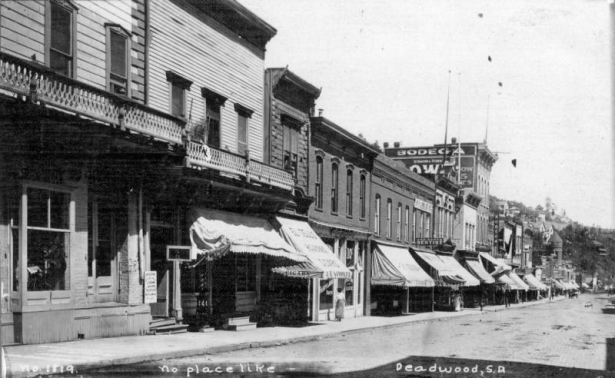 By 1892, Alice had settled in Deadwood, South Dakota. Unlike many of the other tent cities she had lived in, the boom in Deadwood had been going on for over ten years. The town had also survived a fire, so many new buildings were made of brick. It was more like a real city than most places Alice was used to. She also found love again and married her second husband, Warren Tubbs. Tubbs was a house painter who enjoyed gambling. Alice said he wasn't good at it, but their shared interest made them a great match.

Because Deadwood was a major railroad stop, Alice was able to travel easily around the country when she wished to. She and Warren once took a trip to Silver City, New Mexico, where she won six thousand dollars. This was a massive amount of money at the time, and Alice's fame as a gambler spread across the country. She took Warren to New York to shop for clothes and bought the finest dresses so she could deal cards in the best establishments in Deadwood. She and Warren bought a homestead together near Deadwood and continued to be happy together. Unfortunately, Warren died in 1909, and Alice was a widow yet again. 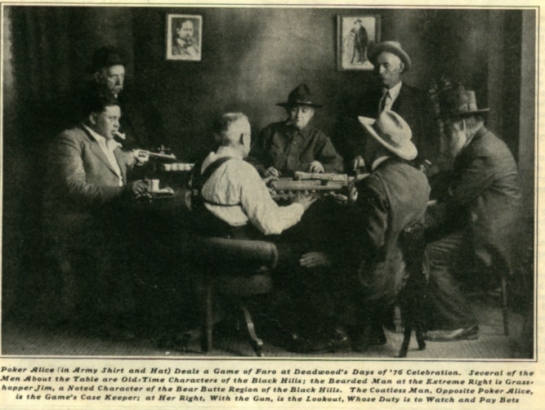 By 1912, Alice was living near Sturgis, South Dakota. Deadwood was no longer very welcoming to Old West characters, and she no longer spent much time there. Alice had just enough money to buy a small house that was to become her business. It was a bar and gambling house with a number of female employees. She was certainly not living in luxury, but she was getting by, which was difficult in those days for an older widow.

Within a year, Alice would experience more tragedy. In 1913, her gambling house was full of visiting soldiers, and she could fit no more in the small building. Outside were more soldiers who demanded to be let in. They cut the electric wires and telephone lines and began trying to break in. Alice fired a gun through a window to make them stop, and a bullet killed a young soldier. A close friend of Alice's said she felt terrible about this for the rest of her life.

By the time Alice was 65, she had met and married her third husband, George Huckert. George raised sheep on his ranch. While not much is known about this period of Alice's life, she and George were together for seven years until George's death in 1924. While many people had forgotten Alice as the Old West disappeared, Deadwood decided to celebrate the old days in 1925. They had a parade and invited back old characters that were still alive, including Poker Alice and Deadwood Dick. Newspapers started to run stories about these Old West characters, and Alice felt important once again. She lived five more years and died after a difficult surgery in Cedar Rapids, South Dakota. She died on February 13, 1930, and was buried at the Catholic cemetery in Sturgis. Her house still stands, and people go to see it every year to celebrate an interesting woman who made her way as a gambler and businesswoman in the Old West.

engineer - someone who uses science to build things

gambling - playing games in which you win or lose money

hoax - a trick played on people

homestead - farmland with a house on it

widow - a woman whose husband has died

How do you think life for women today is different from the 1800s?

Why do you think Alice chose to focus on gambling?

What kinds of problems do you think people faced in early mining towns?

Do you think Alice found happiness? Why?

Mining and ranching in early Colorado: boom and bust, and back again

Strike it rich in Cripple Creek