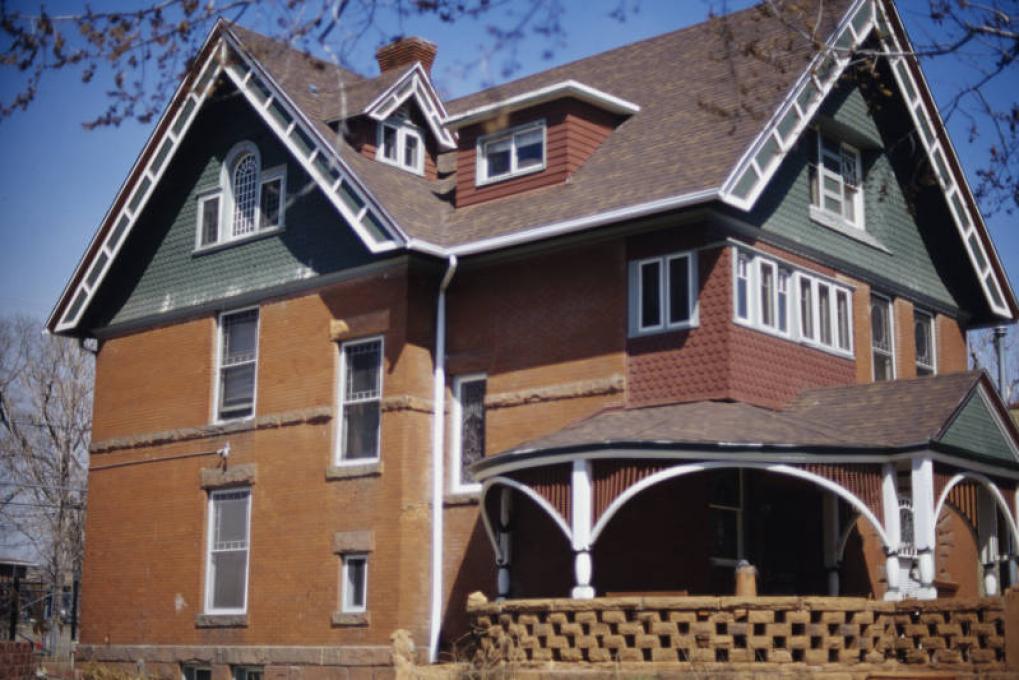 Situated on a hill northwest of the Platte River, overlooking the city, are the Highlands of Denver. The Highlands is not just one district, but many, and was originally a city in its own right. It was incorporated in 1875. By 1890, Highlands included more than thirty-five separate sub-divisions. The city had high aspirations of its own, touting clean air high above the smoke and industry of Denver, clean artesian water, and most important, clean morals. Although liquor was not forbidden in Highlands, liquor licenses were so expensive that none were issued until well after Prohibition.

The hopes and glory of Highlands were short-lived. There were major transportation difficulties crossing the South Platte into Denver and climbing the hill up to Highlands. These problems and the 1893 Silver Crash, which strained the town’s finances, led to a vote by Highlands citizens in 1896 to annex Highlands to Denver. 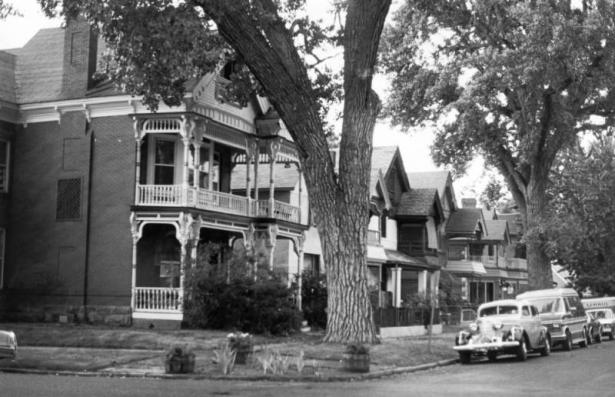 The subdivisions that comprised Highlands included Highland Park, West Highland, and Potter-Highlands. Each of these areas has a unique history and character, and several are historic districts in their own right. One of the most interesting of these is Highland Park (sometimes called Scottish Highlands). This is a designated National Historic District, with its curving streets with Scottish names, immediately adjacent to Potter-Highlands.

In 1858, the Gold Rush brought fortune seekers of various kinds to the area. Two towns were founded: Auraria, located between the Platte River and Cherry Creek, and Denver City, situated east of Cherry Creek and southeast of the Platte. A third community, across the Platte from Auraria, was called Highland and was founded in 1858 by General William Larimer, a land promoter, and his friend, David C. Collier. Auraria and Denver City fought constantly over which town was more important. They soon realized that for their own survival they must cooperate, and thus in 1859 they merged and became Denver. Highland was included and was officially known as North Denver. One year later, on February 28, 1861, Congress formed the Colorado Territory. 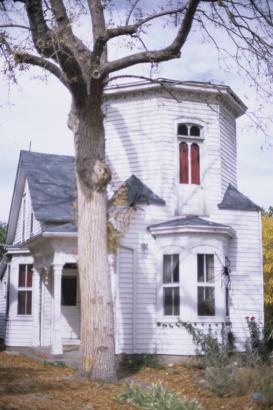 The Reverend Walter McDuffie Potter made his first visit to Denver in early 1863. Impressed with the area and with the wild young town’s need for civilizing and soul saving, Potter returned east and persuaded the Baptist Home Missionary Society to send him back to Denver as a missionary. Potter and his sister, Lucy, returned in December 1863 to found the First Baptist Church of Denver.

With an eye on the future growth of the area, Potter and his sister homesteaded 320 acres of land on a hill west of the Platte River and overlooking Denver in August 1864. During this time, he preached to his congregation in Denver and worked on building a church. By fall 1865, however, his health failed him and he returned east, where he died in April 1866 at the age of twenty-nine. In his will, Potter left the 320-acre parcel to the Home Missionary Society to pay off the debt incurred from the construction of the church.

There was only one problem. The First Baptist Church of Denver claimed that Potter had wanted the land to be theirs, not the Home Missionary Society’s. The Society, however, considered the land useless regardless of its owner and would not consider it as repayment for anything. They wanted the First Baptist Church of Denver to repay their loan in cash. The church could not sell Potter’s land to get the cash because technically it was willed to the Home Missionary Society. Finally, a third party, Samuel Crozer, who had also loaned money to build the church, came to Denver in hopes of foreclosing on the land. Negotiations among the three parties finally led to the sale of Potter’s lands to developers; the Home Missionary Society, Crozer, Lucy Potter, and the First Baptist Church all received money from the sale. Thus the dispute was settled and a thirty-six-block residential district was platted in 1872.

The town of Highlands, which included Potter-Highlands, was incorporated on April 8, 1875. 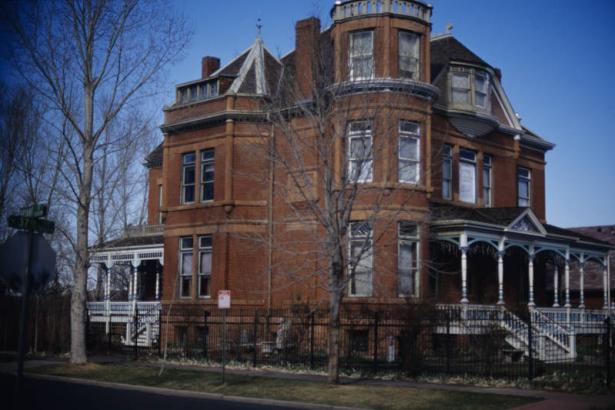 Lined with trees and mansions, “The Boulevard,” or Boulevard F, was Highlands’ main street. Prospect Trail led fortune seekers from Denver to Golden and to gold camps farther west. Prospect Trail was later known as Prospect Avenue, then North Golden Road, and is currently known as West 38th Avenue. West 32nd separated Potter-Highlands from Highland Park. The corner of West 32nd and Zuni ended the strip of commercial development that stretched along Zuni from West 29th to West 32nd. This commercial strip centered on Denver Tramway Company’s main terminal and street car barns at West 30th and Zuni.

As Ruth Eloise Wiberg points out in her book Rediscovering Northwest Denver, Highlands was “to be a perfect Eden, a Utopia. . . . The people of the town were a very proud people. They were proud of their homes, and there was to be no dirty industry in the town. The men were to earn their living in Denver and then return at night to the quiet clean atmosphere of the Highlands. They were proud of their gardens, their trees, their churches, their pure air, their pure water, their pure morals—especially their pure morals.”

When Denver was still a dirty, dusty rambunctious frontier town, devoid of trees and other vegetation, early Highlands settlers were engaged in more civilized pursuits: planting trees and gardens. While Denver was called the Queen City, Highlands was known as the Garden City of the Plains.

Artesian water was discovered by R. L. McCormick while he was boring for coal near West 17th Avenue and Federal Boulevard. At a time when many of Denver’s residents needed strainers on their taps to filter out small fish and other debris from their water, Highlands could boast pure, clean, fresh well water.

Highlands’ pure air was another important selling point for the town. In fact, while tuberculosis was the country’s number one killer, and unpolluted dry air, rest, and good food were the only known remedies, it was only natural that Colorado and Highlands attracted many people in search of a cure. There were numerous sanitariums in Highlands, the largest of which, the Oakes Home, was located in Potter-Highlands.

Potter-Highlands was laid out with square blocks. This arrangement allowed for houses to face all adjacent streets and to contain a carriage lot (or carriage turnaround) in the center of the block. Many blocks still have communal garages; others have incorporated the central lot into the adjoining properties. About thirteen of Potter-Highlands’ thirty-six blocks still have a distinct central lot.

Although the name “Highlands” implies that the area was originally a Scottish settlement, it was actually settled by many ethnic groups. Many Scots did settle in Highlands, however, as did the English, Germans, Welsh, and Cornish. The area later became home to a number of distinct immigrant groups: first the Irish, then the Italians, and later Hispanics. Currently, young families in search of affordable houses in an established traditional neighborhood are making Potter-Highlands their home. It is an area rich in history and tradition. It is, most of all, a neighborhood where people know each other, interact together, and take pride in their community. In the interest of preserving this rich heritage, the Potter-Highlands Historic District was established by the Denver Landmark Preservation Commission on April 20, 1979, but greatly enlarged to the current historic district boundaries on February 25, 1987. 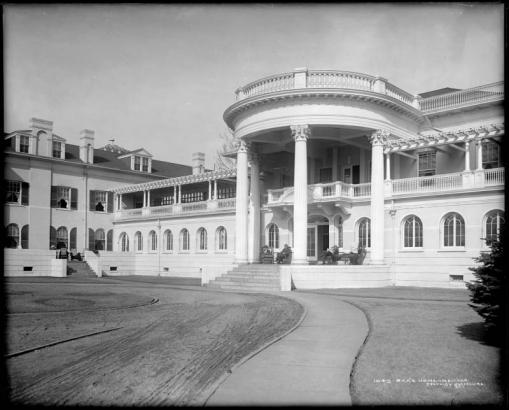 Founded in 1894 by the Reverend Frederick W. Oakes of the Episcopal Diocese, the Oakes Home was the first tuberculosis sanitarium to be built in the city, the second to be built in the United States, and the largest in Potter-Highlands. There were more than twenty-five Classical Revival buildings in the original complex. Among the first were the Emily House for Women and the Grace House for Husbands and Wives (September 1895), St. Andrews House for Men (1896), and Hearts-Ease for the Critically Ill (October 1896). In 1899 the city wanted to establish a park near the Oakes Home, but the local citizens refused, fearing that it would become a park for consumptives. After the Reverend Oakes retired in 1934, the home was closed. In 1943 it was purchased as a convent for the Little Sisters of the Poor and later by the Sisters of St. Francis of Colorado Springs. They reopened it as St. Elizabeth’s Retreat, a retirement community. By 1974 the buildings no longer met the requirements of a retirement home and the home was demolished. It was replaced by newer housing for the elderly and a fourteen-story high-rise (1988) called the Gardens at St. Elizabeth’s.

Modeled after English architect Christopher Wren’s London churches, St. Elizabeth’s Chapel was built for residents of the Oakes Home, who were too sick to attend church elsewhere. At a time when rest and clean, dry air were the only known treatment for tuberculosis, Highlands, a city that prided itself on its clean air, water, and morals, became home to numerous sanitariums. The Oakes Home was the largest of these in Highlands and attracted consumptives from all around the country. St. Elizabeth’s was once surrounded by the Oakes Home and is now surrounded by housing for the elderly that replaced it. Fortunately, the chapel, which is on the National Register, still remains.

Dedicated on November 6, 1902, the Adams Memorial Home, across the street from the Oakes Home, was built by Charles Adams in memory of his wife. The furniture was dedicated to the memory of his daughter; both mother and daughter were victims of tuberculosis. The Adams Home was for consumptives who were unable to pay the prices at the Oakes Home. It is currently a retirement home called The Lennox.

John Mouat, owner of a Denver/Aspen lumber company and vice president of North Side Building and Loan Company, built this large Queen Anne mansion. It is said that he lost his fortune in 1893 and moved out of the house shortly thereafter. In fact, Mouat lived in the house until 1906, when he retired and eventually moved to San Diego. This mansion was subsequently bought by two Denver attorneys. It was initially subdivided in the 1930s and further subdivided into twenty-three makeshift apartments during World War II. James Fowler, influential in the founding of Denver’s Urban Gardens and a famous Denver Communist, eventually obtained ownership of the mansion. Fowler believed that such a grand house should not be for just one capitalist but for the masses. In 1991 the house was purchased by Maureen and Walter Keller shortly after Denver declared the building condemned. After four years of hard work, it was restored to its former grandeur. The mansion received second place in the National Trust for Historic Preservation’s Great American Home Award in 1995. It is currently operated as a bed-and-breakfast called the Lumber Baron Inn after its famous original owner. 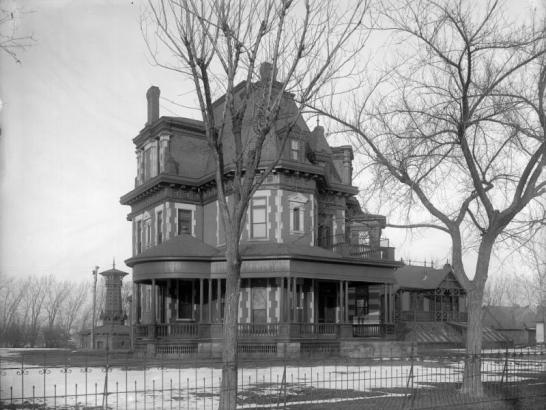 Marcus “Brick” Pomeroy, supposedly named for his red hair (though photos show him as bald) was Potter-Highlands’ most notorious citizen. Officially a newspaper editor, he made his money through his charismatic personality and various investment schemes. Brick was a promoter of more than twenty-five companies with mining interests, most of which eventually went bankrupt, and none of which ever paid the investors any dividends. His most ambitious scheme was to build the Atlantic and Pacific Tunnel through the Rockies. He claimed he could help finance the project with precious metals dug from the tunnel, but the company ran out of money before the project could be completed. In 1902 the mansion became the Belle Lennox Home for young children, and in 1935 it was torn down. A gas station and a mini-mall have now replaced what was once considered one of Denver’s finest homes. It is unclear whether Pomeroy ever actually lived in the house; if he did, it was for only a short period of time—hence the name “Pomeroy’s Folly.”