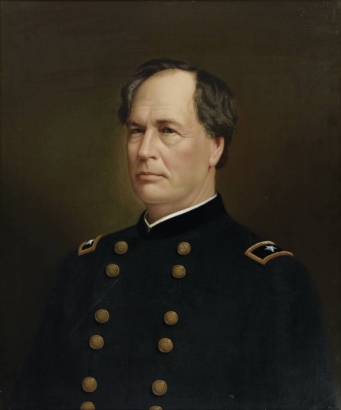 If you’re like most residents of the Mile-High City, you’ve probably never heard of its namesake, General James W. Denver. Denver, the man, was an accomplished soldier, politician and lawyer who led a wagon train, killed a man in a California duel and had a less-than-hospitable relationship with Denver, the city. Among his other notable accomplishments was serving in the Mexican-American and Civil Wars (he was on the Union side in case you’re wondering) and advocating for American Indian rights.

But how did a guy from Virginia, who grew up in Ohio, wind up getting his name surgically seared to a city that he only visited twice?

In 1858, a party of men set out from Lawrence, Kansas (then Kansas Territory), towards what would become Denver, which was in Arapahoe County. (At the time, Arapahoe County covered a huge swath of land in what would become Colorado and Kansas). This party included some names that should be familiar to any Denverite including General William H. Larimer, Samuel S. Curtis, Edward Wynkoop and Charles Blake.

This ambitious party was looking to develop a new town at the foot of the Pikes Peak Gold Region. They were also hoping to get their site named as Arapahoe County's county seat, a designation that would greatly increase their chances of successful town-building. But this was no pipe dream; the men had commissions designating them as Arapahoe County commissioners which were signed by the Territorial Governor of Kansas, James W. Denver.

So it was then that the Denver City Town Company was born on November 22, 1858.

After staking out their claim, the party returned to winter in Kansas where they assumed they would curry favor with Governor Denver and get their coveted county seat. The only problem with this plan was that Denver had resigned his governorship and taken a position as the Commissioner of Indian Affairs about a month before Denver City was founded.

That's the version of the story that's recounted by credible historians such as Tom J. Noel, author of Denver: Mining Camp to Metropopolis; and Jerome Smiley, author of the 1901 work, Denver: A History.

An alternate version of the story, known as "the game supper story" was reported by Denver Post reporter Ely Moore in the Denver Post and related by Edward Magruder Cook in his book, Justified By Honor: Highlights in the Life of General James W. Denver.

In this story, the pioneer party headed back to Kansas after founding Denver and tried to think up a name for the new city each night around the camp fire. Names that didn't make the cut included Eldorado, Eureka, Marshall and Mountain City.

As the men drew within a few days of Lawrence, they bagged a bounty of game meat including, "...a fine buck, some wild turkeys, and a buffalo calf." In honor of their good luck, they decided to host a game banquet with Governor Denver as the guest of honor. Denver was running late, and while the men waited for him to show, they decided to name their city Denver.

This makes for a good story, but it doesn't really pass the historical sniff test. Cook points out that the party arrived in Kansas in July, while most others sources suggest November, which makes sense given that they were wintering in Kansas, not summering.

If you're a fan of historical trivia, please note that General James W. Denver is believed to be the only living person to visit a U.S. state capitol that carried their name. If you're a fan of Denver, you might cringe a bit when you find out that Denver the man was not particularly impressed with Denver the city. Well, it wasn't the city itself; it was the welcome he received when he visited.

For starters, Denver was awarded several plots of land in his namesake city when it was formally founded in 1859. Denver, however, didn't make his first visit to Denver until 1882. By that point, the land had been sold and re-sold many times over. Not one to jump another person's claim (unlike General Larimer), Denver gave up his claim on the plots and moved on. But that was hardly the only time Denver would insult General Denver.

In 1923, historians at the Colorado Historical Society unearthed a letter from Denver to his friend Frank Hall (author of the seminal 1890 Colorado history book, History of the State of Colorado), dated March 4, 1892, in which the normally staid Denver unloaded a laundry list of petty grievances against the people of Denver and the way they treated him when he visited.

All starts out well enough as Denver describes receiving an invitation to visit Denver saying,

"In 1875 I received a strong and pressing invitation from an old friend to visit him in Denver. I accepted."

But things go downhill quickly as poor General Denver is all but ghosted by his friend. "My friend did not even visit me at the American Hotel when I got to Denver. I only saw him when I went to his office. Naturally, I felt that was an unusual reception."

OK, that's pretty rude. But maybe things went better when he visited again in 1883? No such luck.

"In 1883 I received a strong and pressing invitation from the city council to visit the mineral exposition. The council extended me the 'freedom of the city.' I felt highly complimented."

Alas, the people of Denver once again ignored the man whose name they likely uttered nearly every day.

"But my reception was very cool. There was nobody to receive us or give us information...I naturally received the impression there were not many people in Denver City who cared much about me."

(Sadly, the crying smiley face emoji was not yet invented to help fully express the General's pain.)

Denver had, apparently, always been on Denver's mind as he expressed,

"I've always taken a very lively interest in the growth of the city and in all its interests and had never failed to help it along whenever I could and I felt mortified and humiliated when I was confronted with such neglect."

The city of Denver, sadly, never got another chance to shower the good General with the praise he felt he so richly deserved, as he passed into eternity just a few months after unloading his feelings about visiting Denver.

A few months after penning the letter, Denver died in Washington, D.C., supposedly just a few moments after the "sundown gun" fired from a local barracks. A friend who sat by his bedside is said to have remarked,

"What a fitting time for a soldier to die."

So the sun set on a man whose name will forever be remembered, much more than the man himself. But what else did James W. Denver do during his life? There are, in fact, many other noteworthy moments in Denver's life, including a remarkable and deadly duel with rifles, that we'll look at in more depth in Who Was the City of Denver Named After? Meet General James W. Denver: Part 2.

I am in the process of moving to the Berkeley neighborhood after living in for many years in Evanston, IL and, quite excited about this change, have been wanting to know more about Denver - including the origin of the city's name. What fun to discover your lively story on the DPL website. Thank you for this enlightenment!

Hi Heidi - Glad you enjoyed the article and welcome to Denver!

We love these DEN history write-ups, great job. Is there any truth that Denver resigned as Territorial Governor due to a corruption charge?

Thanks for the kind words, Matt. In researching this article I didn't find any mention of this event. It's my understanding that he resigned in order to take the position as Commissioner of Indian Affairs. That said, I didn't find much research that was in any way critical of Denver, and that left me wondering if there wasn't more to his story that hadn't been sussed out by historians...yet.

Are all 22 of the Denver's named for the same James Denver? Great artcle

Hi Bill - Thanks for a very interesting question. We researched this a bit and found more of the other Denvers were actually names after the city of Denver, rather than the man.  Given how disappointed he was at not getting as much attention as he wanted in Denver, Colorado, it's probably better he didn't know about the other Denvers.