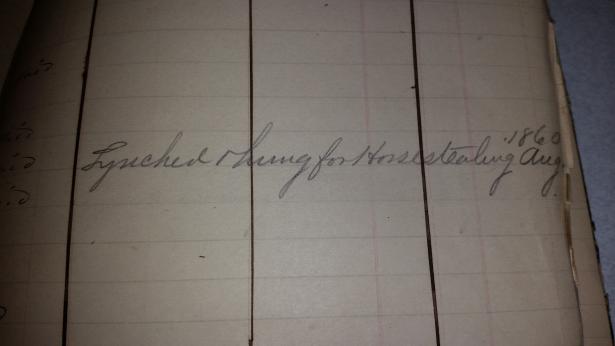 The dark practice of lynching isn't something that's usually associated with the Centennial State but Colorado has a record of extra-judicial killings that rivals that of any Southern state. This form of "justice," which was sometimes described as the work of "Judge Lynch," was an alarmingly common aspect of life in our state between the years of 1859-1919.

What Makes a 'Lynching'?

Lynching is defined by Stephen J. Leonard in his book, Lynching in Colorado 1859-1919 (University Press of Colorado, 2002) as happening when a person is illegally killed by a group who is acting under the pretext of serving justice.

It's important to note that this definition is not limited to those who perished at the end of a rope. It also includes the many unfortunate people who were shot, burned or otherwise murdered at the hands of justice-seeking mobs.

Leonard estimated the number of Colorado lynchings to be somewhere in the area of 175 during the period he studied. Of course the real number is likely much higher and definitely lost to the mists of time. (All but two of those lynchings occurred before 1907.)

For example, Leonard did not include the estimated 160 American Indians who died at the Sand Creek Massacre. Though they were killed by a group supposedly seeking justice, the soldiers who slaughtered them were working under the auspices of the Territorial Government.

Whatever the number, the cases that were documented are a permanent stain on our state's history and occurred a lot more than any of us would likely have imagined. In fact, when adjusted for population, Colorado's lynching numbers between 1882-1903 equal, and often surpass, those of Southern states.

The victims of Colorado's lynch mobs generally reflect the demographics of the state at the time and were usually accused of either murder, rape or theft. Though most of the victims were white, racial prejudice definitely played a role in some of these events.

Besides whites, those identified as, "Mexicans," are the next largest group that appear on Leonard's list of lynchings comprising 20 (or roughly 11%) of the 175 identified events. Italians come in third with eight victims.

One lynching that caught our attention here at the Western History & Genealogy Department was that of John Shear, a Denver resident who was hung for his involvement in a horse theft ring in 1860. Shear, an early Denver pioneer and saloon owner, was also a member of one of the city's earliest libraries, the Auraria Reading Room. Our collection includes a roster from the group (pictures above) in which Shear's name is crossed out along with a notation stating, "Lynched. Hung for horse stealing, Aug. 1860."

Colorado's last known lynching took place in Pueblo on Saturday, September 13, 1919 and took the lives of two Mexican citizens named Jose Gonzalez and Salvador Ortez. The two men were accused of shooting a Pueblo police officer who had stopped them after hearing them threaten local African-Americans. A small mob, around 15 men, grabbed Ortez and Gonzalez from the Pueblo jail and took them by car to the 14th Street Bridge where they were hung.

The men's deaths were the first lynchings in Colorado in over a decade and attracted statewide attention. In Pueblo, the Pueblo Chieftain denounced the mob action saying, "Under the law their act was a crime and their offense against this community, against the law of this state and against civilization."

Given Colorado's grim record for tolerating lynchings, that statement can be viewed as real progress.

This is a fascinating article! Glad I stumbled upon it.