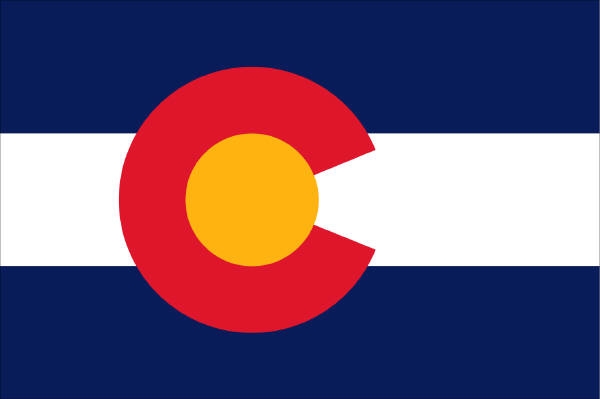 On May 6, 1911, the Colorado State Legislature passed Senate Bill 118, designating a new Colorado State Flag. That piece of legislation also included a section explaining, "10 Significations," of the flag which are reprinted here in full:

Second -- C stands for centennial. Colorado was admitted to the Union in the year 1876-- the one hundredth anniversary of American independence.

Third -- C stands for columbine, the state flower of Colorado.

Fifth -- The aureate center also represents the most precious of metals, gold, in the production of which Colorado excels all other states.

Sixth -- The Yale blue stripes stand for the ever-smiling skies of the Rocky Mountain region.

Seventh -- The white stripe typifies the white metal, silver in whose production Colorado also leads the entire galaxy of states.

Eighth -- The white stripe further represents the snowy peaks of the Rocky Mountains.

Ninth -- The Blue and White stripes together give us two of the delicate colors of the exquisite State flower, the columbine.

Tenth -- The interlaced gold and silver cords symbolize the union and harmony of the sterling people of the Centennial state.

To learn more about how Colorado's State Flag came to be, check out The Story Behind Colorado's Iconic State Flag and the Minnie F. Wall Papers at Denver Public Library's Western History and Genealogy Department.

this is cool I know a little about our state but this is new and I like it even more so being a mile high city native!!!!

it is really cool!

it is really cool!

Would just like to add it was designed by Andrew Carlisle: https://flagstore.com/products/colorado-flag?_pos=1&_sid=a81c08af7&_ss=r

Thank, Cameron! We were pretty surprised, too when we learned the whole story.

The flag represents all that?!?!?!

This was very useful to me. It's so amazing that one flag can represent so much of our glorious state.

I always thought Spanish for red was "rojo." It's not unusual to have more than one word for anything. Maybe "colorado" is for a particular shade?