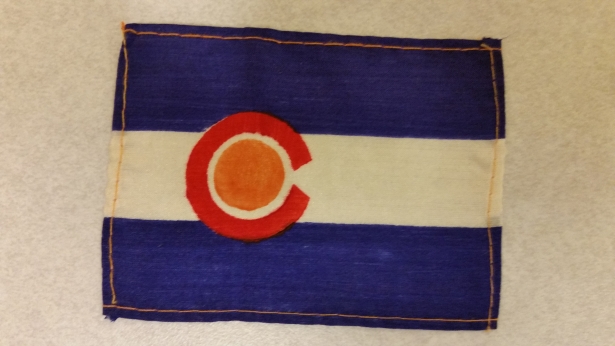 The Colorado state flag is enjoying something of a resurgence lately as newcomers to the Centennial State, along with no small number of long-time residents, have taken to wearing it on clothing and waving it proudly at public events such as concerts at Red Rocks Amphitheatre. While almost every Colorado resident can recognize the flag on site, very few of us have any idea what the various elements within it mean, and how it came to represent our state.

Fortunately, the whole story of the Colorado state flag can be told thanks to the efforts of Mrs. Minnie F. Wall. Wall, who carried the grand title of Vice Chairman for the Western Division, National Committee for Correct Use of the Flag; Colorado State Chairman, Nation Committee for Correct Use of the Flag, left behind a detailed description of the story that is now housed in the Western History Manuscript Collection.

According to Wall, the birth of the Colorado flag can be traced to a meeting of the Daughters of the American Revolution (D.A.R.) which took place at the home of one, "Mrs. Van Horne," at 317 Lafayette Street on November 14, 1910. The ladies present at the meeting mistakenly believed that Colorado did not have a state flag and that one should be created as soon as possible because, "State loyalty is too precious ever to be lost."

Full of inspiration, the ladies of the D.A.R. set in motion a plan to create a Colorado State flag. What they didn't know, and would soon find out, is that Colorado already had an official flag and had had one since 1907. That particular flag was a pretty uninspiring affair that featured the State Seal over a blue background.

Unfortunately for the flag, but fortunately for a generation of t-shirt designers who wouldn't be born for another 80 or so years, the only copy of that flag was sitting in a custodian's closet at the State Capitol and hadn't seen the light of day since its introduction three years earlier.

Undaunted, and completely inspired, the D.A.R. ladies moved forward with their plan for a new Colorado flag.

By December, the D.A.R's flag committee had entertained a number of proposals for a Colorado flag and settled on one that is a far cry from the iconic flag that waves today. This first draft had two red stripes sandwiching a white stripe, with the state seal, or an outline of the state seal, in the middle.

With the help of State Senator W.H. Sharpley, the new flag bill flew through the legislative process with one notable speed bump; no one much cared for the flag's design. With a minimum of muss and fuss, a new design was submitted by Andrew Carlisle Carson.

Carson, who is sometimes mistakenly referred to as Andrew Carlisle Johnson on various internet sources, wanted a flag that consisted of:

...two horizontal stripes of Yale Blue, with one white stripe (all of equal width) between, with a large red "C" with a gold centre at the end near the pole.

On April 25, 1911, a mere five months after the D.A.R. ladies met on Lafayette Street, the Colorado State Senate passed Senate Bill No. 118, designating Colorado's official new flag. According to a report from the Denver Republican on that day, "There is no opposition and it is believed the measure will pass through the house like a shot."

And that's exactly what happened.

On May 6, 1911, the final flag bill did indeed pass through the House of Representatives like a shot and Colorado had a new flag that would make its public debut at a Grand Army of the Republic parade May 30.

It's worth noting that the new flag bill contained a few passages that really designate the flag as something the belongs to the people of Colorado and not just their official representatives in the Capitol building. Wall notes a major difference between the 1907 flag bill and the 1911 flag bill:

In the bill legalizing the State Banner occur these words, 'to be used on all occasions when the state is officially and publicly represented.' In the new bill creating the new State Flag these words were repeated with the additional clause inserted, 'with the privilege of use by all citizens upon such occasions as they may deem fitting and appropriate,' and so does Democracy grow.

Whether they realized it or not, the ladies of the D.A.R. and their compatriots gave their tacit approval to the legions of Colorado-flag wearing citizens that can be found across our state to this very day.

Despite the ease with which the flag bill passed, there was one minor problem. In their excitement to get a new flag bill passed, no one really specified exactly what shades of red and blue should be used on the flag. In 1929, the legislature passed a bill specifying that the red and white stripes be the same shades used in the national flag...but the story doesn't end there.

While the issue of what colors are on the flag was laid to rest in 1929, no one specified what size the "C" in the middle should be. This led to an extended period when the "C" was placed in the center of the flag and was dwarfed by the other elements. In 1964, the legislature passed yet another flag bill, this one specified exactly how large each element, including the "C", should be and was the true birth of the Colorado flag we know today.

In an era when flags often court controversy, Coloradoans are fortunate to have a flag that is generally revered and flies with pride and without issue.

Want to learn more about what the elements of the Colorado flag mean? Check out more excerpts from Senate Bill No. 118.

I noticed the author uses "Coloradoans," which is how I always used it (3rd generation native) but I not long ago read an article that convinced me the proper term is "Coloradan," in part based upon the fact that someone from Mexico is not called a "Mexicoan." Thoughts?

CORRECT. COLORADOAN IS IMPROPER ENGLISH. YOU DROP THE O AND AD AN TO THE END TO MAKE IT COLORADAN.

While I do agree, It's improper English to capitalize every letter in a sentence.

When I hear "Coloradoan", I usually think that the speaker is from out of state.

I am a 67 yr old native of Colorado. It has always been Coloradoan. Others not from Colorado ( also refer to as outsiders) have always had their slang to shorten it to Coloradan. The outsiders were typically from Texas, Kansas and Nebraska.

I just stumbled on this article here in 2021, but I noticed the "Coloradoan" part too and it made me smile. As far as I know, "Coloradan" started being used in the late 90's or thereabouts and I had been told it was something that started from non-natives and was weirdly adopted as the norm. I hate it, personally. I grew up in a town with a newspaper called "The Coloradoan". It's what we are. And as a native, I've never used the term "Coloradan" as it just sounds lazy to me. Those are my thoughts, and while I know there aren't many of us natives left in the state (me included, I've moved but miss my home every day), I wish we could somehow go back to using the term "Coloradoan".

Right on! Coloradoan forever! I was born in Leadville. Coloradan is a modern affection of stupidity.

The only proper use of "Coloradoan" is when referring to the name of the Fort Collins newspaper.

Yes! This is the proper use as a native of Colorado. I am a Coloradoan!

DAR is and has always been active in helping to preserve our entire countries history and in helping veterans whenever possible. It is a great organization to be a member of. As for the use of the word "Coloradoan", I have always referred to myself and others who live in the state as "Coloradians" when speaking in plural tense of people that live here and "Coloradan" when referring to people in the singular tense. I may be wrong using term "Coloradians", but I have lived here long enough to know true "Coloradians" referr to themselves as such..