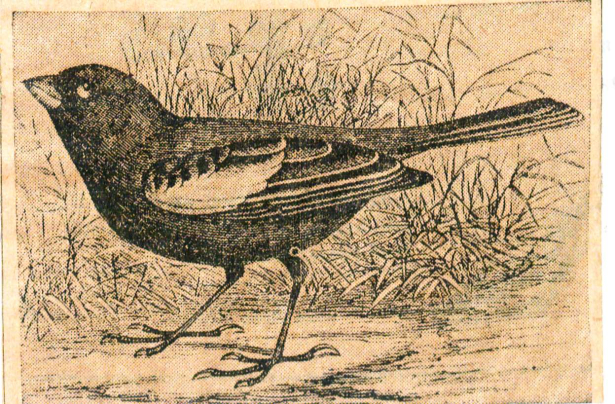 On April 29, 1931, the Colorado State Legislature passed Senate Bill No. 251, which elevated the Lark Bunting to the status of Colorado's state bird. The Lark Bunting was a little known prairie dweller that beat out better-known species such as the Meadowlark, Robin and Bluebird in a battle that involved legions of schoolchildren, a very devoted bird enthusiast, and the state's top educator. Ultimately, the Lark Bunting won over lawmakers who saw the beauty of the bird whose unique flight pattern, songs, and lifestyle made it the perfect avian to represent the Centennial State.

The Lark Bunting's rise to Mile High majesty actually began in 1926 when Kentucky became the first U.S. State to designate an official state bird, the Cardinal. Other states quickly followed suit and by 1931, 13 U.S. States had appointed state birds. As we shall see, this flush of action turned out to be serendipitous for the Lark Bunting as many of the more common birds (the Robin, Meadowlark, and Bluebird) had already been claimed by multiple states by the time Colorado got around to naming a state bird.

But how, exactly, did the Lark Bunting, a bird most Coloradans would be hard pressed to identify, flutter past its competitors and become our state bird?

What's So Special About the Lark Bunting?

The Lark Bunting  (calamospiza melanocorys) is a type of Sparrow found in a stretch of the Western prairie that ranges from Texas to Montana. In Colorado, they're found almost exclusively on the Eastern Plains and can still be found in abundance in prairie locales such as Barr Lake. Lark Buntings are migratory birds that leave Colorado in September for Texas, and head back in May for mating season.

Female Lark Buntings have brown streaky feathers and blend in very well with their prairie surroundings. Given the dearth of trees on the prairie, it's not surprising that the Lark Bunting makes its nest on the ground, hidden among tall grass and weeds.

Male Lark Buntings have distinctive black bodies with white patches on their wings. During mating season, the male Lark Bunting impresses potential mates by flying 20 to 30 feet straight into the air and then dropping down in a spiral, all the while chirping a unique call.

Most Lark Bunting males are fairly monogamous but will take multiple partners when an abundance of females are available. For their part, female Lark Buntings select for different traits every mating season in an evolutionary move aimed at keeping the species genetically diverse.

To most people, there's nothing really special about the lark bunting, which the May/June, 1931 Denver Municipal Facts described as, "...a rather non-descript black and white bird about six to seven inches long."

But most people are not, Roy M. Langdon. 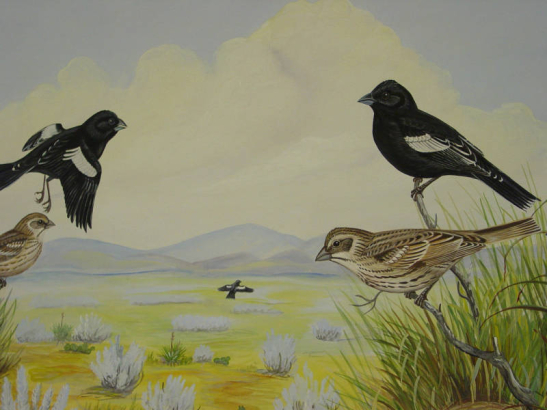 In 1927, Roy Langdon was a Fort Collins educator and the president of the Colorado Audubon Society. Langdon is also almost single-handedly responsible for the Lark Bunting's rise to prominence.

In Colorado, state symbols such as the Columbine and Blue Spruce Tree were selected by Colorado schoolchildren. So it wasn't particularly surprising when a representative from Larimer County presented state lawmakers with a poll that asked students which bird they thought should be Colorado's State Bird. What was very surprising were the results. The 2,281 children polled mentioned 34 different birds, but the previously unknown Lark Bunting beat them all out garnering a full 60 percent of the vote.

Though there's never been any difficult questions pointed at Langdon, it does seem suspicious that his home turf would be so disproportionately pro-Lark Bunting.

Not everyone was as convinced as the children of Larimer County, especially Katherine L. Craig, Colorado State Superintendent of Public Instruction. Craig unilaterally declared that her office was interested in "character training and bird study in all the state's schools.” Gardner's office issued a booklet titled Bird and Arbor Day Studies, which described the four or five birds that her office thought appropriate for state bird status and an official State Bird ballot. The Lark Bunting was conspicuously absent from the list, and the Meadowlark carried the day with 39 percent of the vote.

Langdon, however, was just gearing up his fight on behalf of the Lark Bunting 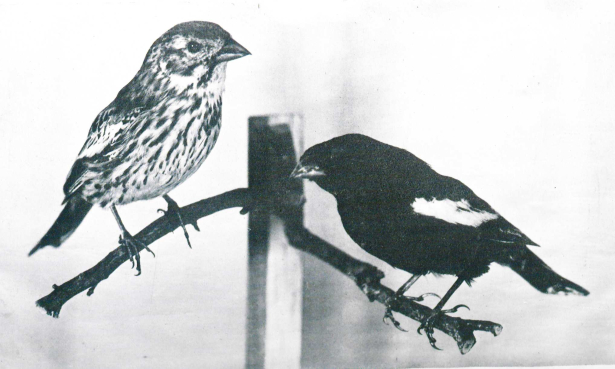 The Case for the Lark Bunting

Langdon was not about to let Craig brush off his best bird without a fight. In the years between 1928 and 1931, Langdon produced a blizzard of pro-Lark Bunting publications and editorials that are summed up in the publications he presented to state lawmakers in 1929, titled Seventeen Reasons WHY THE LARK BUNTING Should Be Colorado's State Bird and The Case for the Lark Bunting.

At the core of Langdon's argument was the idea that mountain flora and fauna were overrepresented in Colorado's official symbols and that the state was long overdue for a symbol that represented both the prairie, and its accompanying agricultural interests. Langdon's influence is readily evident in a January 30, 1929, Fort Collins Express-Courier editorial that declared, "We are agricultural and should be proud of it. The Mountain Bluebird can have no meaning for the farmer. The Lark Bunting, on the other hand, typifies the farm and therefore should be added to the emblems of the state."

Langdon was a shrewd marketer who could turn any of the Lark Bunting's so-called flaws into rock solid arguments on its behalf.

When critics said the Lark Bunting's habitat ranged well out of Colorado, he pointed out that not only was it necessary to select a migratory bird because the other selections had much wider ranges, he also pointed out that, "The fringe of Lark Buntings extending into surrounding States is the outpost of the heralds stationed to greet travelers with a joyful welcome to Colorado"

Critics who thought the Lark Bunting's black and white markings were too plain of feather to be state bird were told, "Black and White, the markings of the Lark Bunting, are 'colors' best and most economically adaptable to trade mark and letterhead uses."

While Langdon's full-court press definitely won some Lark Bunting converts, the point that resonated most with lawmakers was the fact that no other state had claimed the prairie bird. By the time the State Legislature got around to making its decision, the Meadowlark was the state bird in four other states, the Robin in three, and the Bluebird in two. Craig and the state's other Lark Bunting haters didn't know it, but the tide was turning towards Langdon's avian love.

How a Bird Becomes Law

On April 21, 1931, the State Legislature considered the merits of various birds with supporters of the Mountain Bluebird squaring off with Langdon in front of the gathered lawmakers. What the Bluebird faction lacked was passion, which Langdon had in abundance. Langdon also helped his cause by packing the State House with dozens of Larimer County schoolchildren, who enthusiastically cheered Langdon's speech.

Despite the Lark Bunting's many attributes, it was ultimately the default choice for legislators who really only wanted Colorado to have a state bird that wasn't already claimed by another state.

The April 22, 1931, issue of the Rocky Mountain News summed up the situation in an editorial saying, "The lark had opposition in the mountain bluebird but because most of the representatives prefer the prairies to the mountains, the Lark Bunting was named the official bird."

A few months later, Trail and Timberline, the journal of the Colorado Mountain Club, was less generous. In its June 1931 issue, a Trail and Timberline editorial lambasted the lawmakers' wisdom saying, "A lark bunting is unknown -- unknown to ninety percent of Colorado citizens, unknown also to a large percentage of the state senators and representatives who voted it as our state bird."

Like so many prairie dwellers, the Lark Bunting has seen its habitat decrease considerably over the past 92 years. The vast grasslands it once called home have been reduced to a fraction of their original size by the continual encroachment of man, machinery, and buildings. The Audubon Society describes the Lark Bunting as "widespread but uncommon," which seems about right. This unique bird, which ostensibly represents Colorado, is still a mystery to most people in Colorado but has definitely earned its spot among our state's symbols.