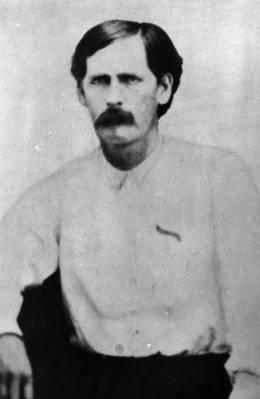 On October 26, 1881 in Tombstone, Arizona Territory, Wyatt Earp, his two brothers, and their comrade Doc Holliday locked horns with the Clanton and McLaury brothers in what became the most famous shootout in the history of the American West. The gunfight at the OK Corral, which actually occurred on Fremont Street six blocks west of the corral, made Wyatt Earp a legend and one of the most famous lawmen to ever pin on the Silver Star. What started out as no more than a war of words escalated into the gunfight of the century that has since been the basis for copious amounts of books, films and television productions. But what is often glazed over in these accounts is the judicial hearing that followed the fight. On October 29, 1881 Ike Clanton - brother of Billy Clanton who perished in the battle - filed murder charges against the Earps and Holliday. On November 7, Wyatt and Doc Holliday were arrested and carted off to jail. Justice of the Peace, Wells Spicer presided over the preliminary hearing that saw Wyatt Earp take the witness stand in his own defense. Wyatt swore up and down that shots were not fired between the two parties until the Clanton and McLaury boys brandished their six shooters first. Ike Clanton swore otherwise. Virgil Earp, Wyatt's brother who was severely wounded in the tussle, testified from his bed in the Cosmopolitan Hotel. After gathering a month's worth of testimony, Judge Spicer issued a decision exonerating the Earp's and Holliday of any wrong doing. If you are intrigued like I am by this story, you are in luck! Contained in the archives of the Denver Public Library is a copy of the deposition and testimony in the proceedings of the Earp-Clanon Murder case. The collection number is -M956. Visit the 5th floor reference desk to look at the collection and decide for yourself!