Countless books and films have been constructed around the struggles people faced while moving across the Rocky Mountain West. The completion of the railroads obviously made crossing the continent less difficult, but many points across the West remained out-of-reach from railroad hubs. Even with the advent of the automobile, roads in rural areas remained scarce, and the ones that existed were often unpaved. Add to that the need to carry basic provisions in desolate areas lacking much in the way of water, food, or fuel, and you can see roots of the transportation revolution that came decades later. 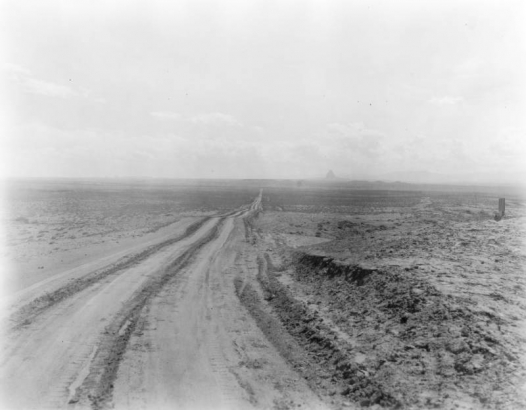 The roads that would eventually make up the Navajo Trail Highway were U.S. Route 160 (established in 1930) in southeastern Colorado and U.S. Route 450 (established in 1926), which ran from Walsenburg to Thompson, Utah. In 1932, the decision was made to unify these routes under the banner of Highway 160. In September 1939, members of the Highway 160 Association met in Mesa Verde with plans to adopt the moniker “Navajo Trail.” What follows is the reasoning for the name according to an October 2, 1939, article in the Montrose Press:

“The name, Navajo Trail was adopted when old timers told about the days when they drove painted stakes at various cross roads to help travelers find their way. The stock direction was: ‘It’s just a Navajo trail — but you can make it.’ The name seemed so appropriate, it was enthusiastically adopted.”

In April 1942, the Navajo Trails Association met again with over 80 representatives on hand. They were avidly promoting the route as, “the most interesting highway in America” and sought to increase commerce and tourism across southern Colorado. According to the Alamosa Daily Courier, M. F. Miller, a La Junta lawyer, declared,

“This objective is to give thousands of tourists and business people the opportunity to view the most beautiful and historical scenery that one can ever hope to find anywhere.” 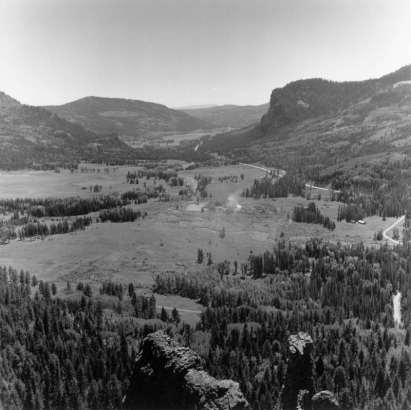 Clearly, there was no lack of enthusiasm in the room. What was needed was funding. Some counties were allotting funds for projects such as  bridge completion, and some received federal Works Progress Administration funds for activities like oiling unpaved roads. Others struggled for funds amongst the receding Depression and the current world war.

Like many highway projects in America, the real investments would come during the post-war boom. In 1958, Congress approved funding for Navajo Route 1, which would cross the Navajo reservation through Tuba City, Arizona, and up into Colorado. For a time, the Southern Utes opposed the project on reservation land and there was talk of rerouting it toward the Aneth Oil Field in southeastern Utah. The dispute was settled and the project continued. The Four Corners region was promising to be a tourist mecca as more and more states sought to promote roads linked to the Navajo Trail. By November 1961, the Denver Post was claiming that the nearly completed highway would bring 100,000 additional cars to the San Juan Basin in its first year. The Post also stated it would save those traveling from  Chicago to Los Angeles an estimated 260 miles. 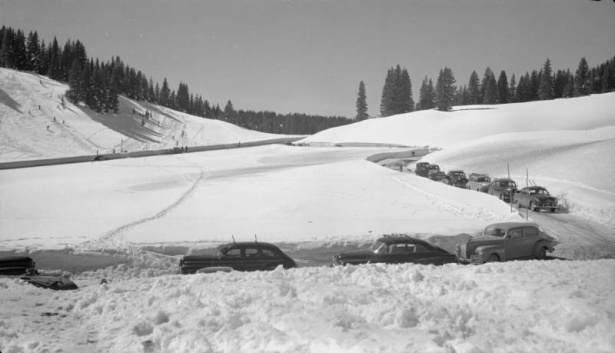 On November 16, 1962, the governors of the Four Corners states met at the Four Corners Monument to celebrate the dedication of the new thoroughfare. There were speeches by representatives of the Navajo and Mountain Ute tribes as well as federal government officials. What was seldom reported by the press was that one commercial and governmental interest in the road was the facilitation of trade in coal and uranium from the Navajo reservation. Nonetheless, by 1963, the new route was siphoning off travelers from the famed Route 66 as tourists could now stop at sites like Mesa Verde on their way to the Grand Canyon. Some parks even became strained by the flood of visitors, and towns like Durango reported a doubling of their tourist trade.

As America raised its Baby Boomers and saw the proliferation of family road trips, a boom in the interstate highway system continued unabated. Eventually, these smaller, less-direct routes fell out of favor with cross-country travelers. Likewise, references to Route 160 as the Navajo Highway fell out of use. That said, this route still exists and currently runs from Poplar Buff, Missouri, to a point near Tuba City, Arizona. As promised by its early promoters, the highway still brings travelers through amazing landscapes and timeless historical monuments. 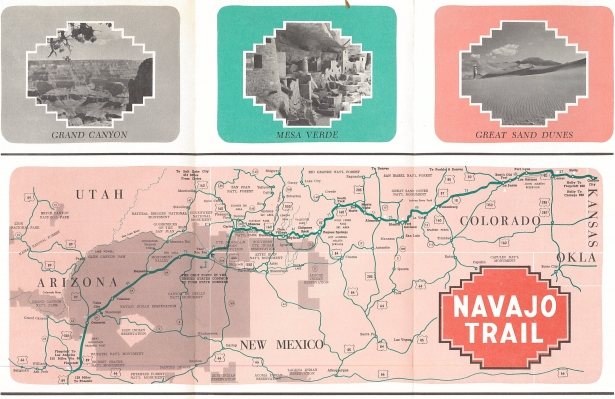 One might assume that something named the Navajo Trail Highway may have had its roots in an actual indigenous route, but that’s one area where the fog of history grows thick. Aside from some early expeditions from Spain, Mexico, and the U.S. government, there is not extensive documentation on the subject. One can surmise that many documented wagon routes and trade roads may have had their roots in information received from native guides. One can also assume native traders would utilize existing game trails, river valleys, and other paths of least resistance, but the assumption is far from definitive.

Luckily, there are those who continue to work to document these ancient routes. One such group is the Dominguez Archaeological Research Group. With funding from state and federal agencies, they have, among other things, been working to document native and early pioneer routes. They have found some agreement between the Dominguez-Escalante Expedition and the documents from the Hayden Expedition. Both identify a “Navajo Trail” from just south of Montrose to the area around Nucla, Colorado. Unfortunately, this trail does not correlate with what would become the future highway.

Likewise, Carl Eikemeyer’s book Over the Navajo Trail describes a route across New Mexico that, according to him, was largely co-opted by the Sante Fe Railroad. Taking all this into account, it seems that the naming of this highway was largely a romantic ploy to bring more tourists through the state. While it did lead to the Navajo reservation, its roots were more in committee work than in history. Nonetheless, the route stands as a reminder of a bygone era that was in love with both the possibilities of a new highway-linked America and the myths of the Old West.

If anyone has fond memories of travels along this route, we would love to hear from you.

Interesting article. I drove 160 from Durango to Flagstaff in 1995. I made the obligatory stop at the Four Corners monument to have my picture taken being in four states at one time. I was told later that the actual four corners is some distance from where this monument is, so it's geographically incorrect, but I don't know. After getting past Four Corners, the drive got to be pretty lonesome. Lots of remarkable scenary, vast wide open spaces and not much if any human settlement. There was a trading post in Teec Nos Pos where I stopped to get something to drink. They had a board by the cash register listing the names of everyone who was behind in paying their monthly tab. The turnoff to Monument Valley was kind of busy, but after that it was just wide open spaces until Tuba City.

I was driving to California to start a new job. I grew up in Denver but had never been in this part of the world, so it was a bit of an adventure for me, my own version of heading through the West for new opportunity over the horizon.

Thanks so much for sharing this, Jude! I remember seeing that part of the country for the first time on a road trip in 1995. The different landscapes provide a stunning backdrop for creating lasting memories.

There are still some "Navajo Trail" road signs along Highway 160 in the San Luis Valley. I recently (May 2021) shot a photograph of this one at the east end of Fort Garland: https://commons.wikimedia.org/wiki/File:Navajo_Trail_road_sign.JPG I have also seen the signs in Blanca. They are small and easy to miss.

I can remember seeing many Navajo Trail signs in the 50s, riding in the back seat of my parents' Chevy. I still drive 160 across Southern Colorado frequently but haven't noticed any signs, and I've always wondered what happened to them. Next time I pass through Fort Garland and Blanca I'll look harder!

Thanks so much for sharing memories of this historic highway!