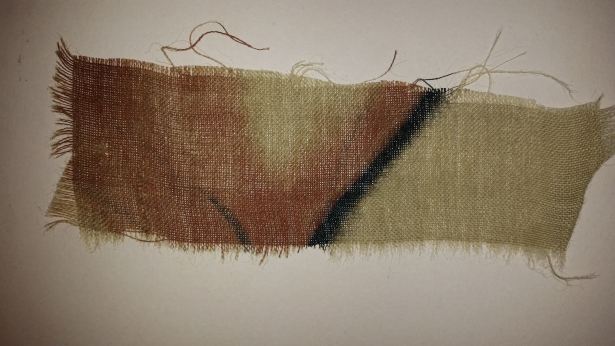 At the time, Richmond served as both the capital of the Confederate States of America and an important munition and supply hub for the rebel army. When the city fell, it took any realistic chance the Confederates had of winning the war and realizing their secessionist dreams.

Given its strategic and symbolic importance, it's not surprising that retreating rebels torched the city as they scrambled towards their next stop. While fleeing confederates did plenty of damage to the historic city, some items survived the onslaught. Even better, a couple of those items made their way into the vault here at the Denver Public Library's Western History/Genealogy Department.

Tucked away in a box marked, Confederate States of America, are two cloth scraps (one pictured above) from a Confederate flag that allegedly flew over the rebel capitol. The Confederate States collection also includes treasury notes, bonds, and various pieces of correspondence from CSA cabinet members to their president, Jefferson Davis.

The collection was donated to DPL in 1939 by one E.M. Kessler, who received them from Denver railroad tycoon, and tunnel namesake, David H. Moffat. Moffat had been given the items from Daniel Sayre in 1879.

Included with the flag fragments are a note signed with the initials, GWK, which reads, "Piece of flag that floated from the capitol at Richmond, va when it surrendered. Received from my cousin Phillip who belonged to one of the Regiments that besieged the city."

While the other items in the collection have been confirmed as the real deal, it's impossible to know whether GWK's description of the flag fragments are accurate. Victorious soldiers throughout history have always grabbed war trophies to bring home. (We regularly hear tales of the various treasures men from the 10th Mountain Division "liberated" from Mussolini's villa in Gargnano, Italy - including his sword and gold epaulettes.)

That said, it's entirely possible that the flag fragments never flew over Richmond at all and were simply chopped up and sold in pieces by enterprising, and certainly desperate, Richmond residents looking to feed their families.

On this auspicious anniversary, the items in the CSA collection are a meaningful reminder of the bloody Civil War - or "War Between the States" - depending on where you learned history - and its continuing impact on the United States of America.

The night they drove ole Dixie down. 150 years ago Richmond fell and the bells were ringing.(The Band). Confederate memorabilia is rare here in Colorado. In the south the war was called, the war of northern aggression. It was inevitable because slavery in a free country can't exist. One union of states not a confederation.

Thanks for your comment JC. These items are, indeed, pretty unusual for Colorado and we're very fortunate to have them in our collection.