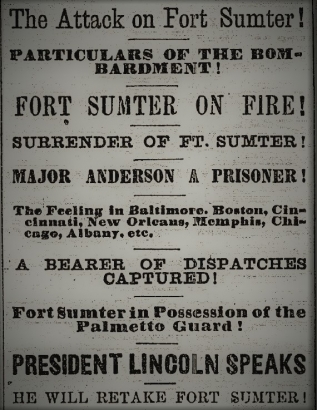 While many of us may be aware of Bleeding Kansas, a period of brutal fighting between pro-slave and abolitionist forces, we may not always remember Colorado was a part of Kansas Territory during that period. Shortly after Kansas became a free state in 1861 and was given its current border, Colorado Territory was established. Lincoln appointed staunch unionist and army veteran, William Gilpin, to govern the new territory, but not everyone in Colorado shared his loyalties.

Not only did many people living in Colorado share the ideology of a divided Kansas Territory, but many natives of the new Confederacy flocked to Colorado in search of gold and other riches. Even in the growing city of Denver, there were secessionist factions. According to the April 24, 1861 edition of the Rocky Mountain News

“A Rebel Flag - Yesterday a small disunion banner was hoisted over the store of Wallingford & Murphy. Aside from the bad taste displayed by the parties who allow such a rag to disgrace their premises, the event is of no importance.”

West of Denver, secessionists circulated rumors that Captain Samuel Cook, a Union officer and organizer of the 1st Colorado Volunteers, had been captured somewhere along the Arkansas River by a large Confederate force. Papers like the Daily Colorado Republican and Rocky Mountain Herald on November 13, 1861 immediately called such rumors out as farcical, and they were right. There were, however, Confederate militias being formed around the state. This included a Denver faction, though, according to William Clarke Whitford, the militia was disbanded in early 1861 after being raised by Denver postmaster W. P. McClure. 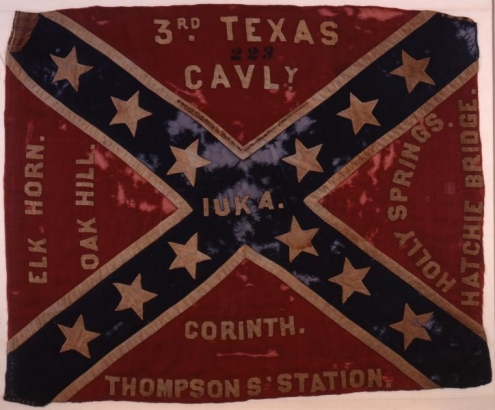 In late November 1861, the territorial marshal marched a group of about two dozen Confederate militiamen into Denver. They had been captured along the Huerfano River east of Pueblo. Among the men being turned over to the U.S. Marshal in Denver were two brothers, James and John Reynolds. According to General D. J. Cook, chief of the Rocky Mountain Detective Association, a jailer named Jack Robinson, a Confederate sympathizer, helped the Reynolds and other Confederates escape, eventually becoming a core member of the gang himself.

The Reynolds Brothers story picks up in 1864, owing largely to Thomas Holliman’s testimony given to a Park County citizens’ committee. His testimony was published in the Daily Mining Journal on August 31 and September 1 of that year. Holliman and others had been hiding out in North Texas, trying to avoid conscription when they were approached by Jim Reynolds. Reynolds was serving as an irregular (officially with the Third Texas Cavalry) and was attempting to recruit men for an incursion into Colorado. He claimed to have 50 men enlisted, but only managed to leave with about 22.

From the start, Reynolds’ interest seems to have been more focused on the chance to conduct profitable raids with impunity rather than serving the Confederate cause. The gang apparently moved in the general direction of the Spanish Peaks with some pack animals and a slim supply of rations. As with any good outlaw tale, they reported multiple gunfights with the Apache before reaching the Santa Fe Trail. Before too long, they came upon a Mexican mule train and attacked them making off with several thousand dollars in drafts, greenbacks, and coins. After this conquest, there seems to have been a quarrel amongst the gang members over money and most of the men went separate ways, leaving a gang of nine. 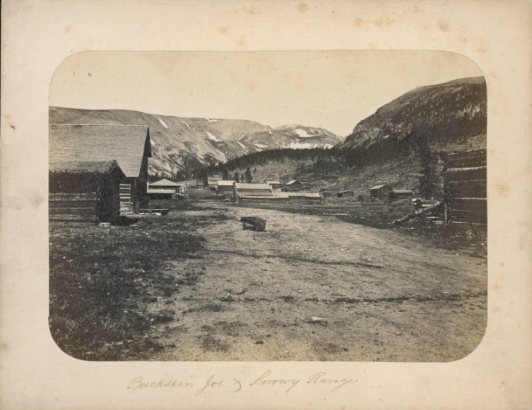 The Gang’s All Here

The diminished Reynolds group made their way through Canon City and up towards South Park. They stopped at the ranch of Jim’s friend Guiread just below Fairplay. Jim inquired about the stage coming out of Buckskin (aka Buckskin Joe, aka Laurette), a town a few miles west of present day Alma. He intended to ride out to the McLaughlin Ranch ahead of the stage’s arrival. As planned, he and his men rode to the ranch, took McLaughlin prisoner, and waited for the stage to arrive the next day.

When the stagecoach arrived, the Reynolds’ ordered out all the occupants and robbed them. A guard offered them a key to the strongbox, but Jim preferred to break it open. Inside they found at least $4,000.00 in gold dust and made off with cash from the letters they ripped open. Some accounts claim they stole upwards of $10,000.00 including some amalgam being shipped east. Jim Reynolds ordered the stage be broken up with an axe to deprive the government of its conveyance. From there, they went on to raid the Michigan House and other ranches for cash, arms, and canned goods.

While the Reynolds attempted to ravage the countryside, Billy McClelland, a man they robbed on the Buckskin stage, was riding day and night across the region warning townsfolk. Groups of miners and ranchers alike organized and armed themselves. Colonel John Milton Chivington even sent men from Denver to the region to protect the stages. According to Holliman, Jim Reynolds began regaling his men with plans to pick up recruits in Denver and across the state to do as much damage as possible. 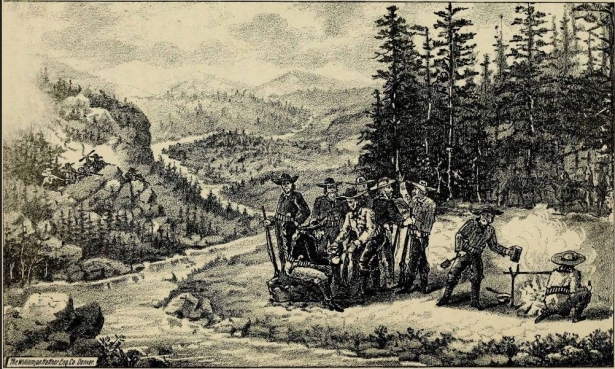 Attack on the Robbers Camp ("Hands Up" by General D. J. Cook)

Before too long, Jim began noticing the scouting parties all across the mountain range and thought it best to conceal their loot. According to General Cook, Reynolds concealed three cans of gold dust and distributed one can and some of the $40,000.00 in currency amongst the men. On July 31, 1864, a group of men under Jack Sparks made their way towards the outlaws’ camp and opened fire. Jim Reynolds was wounded in the arm and Owen Singletary was killed. Most of the gang escaped and Sparks’ men cut off Singletary’s head bringing it back to Fairplay as a trophy.

Following the shootout, John Reynolds and Jake Stowe were pursued across the Arkansas River, eventually escaping. The rest of the men were picked up at various points between 19 Mile Ranch and 39 Mile Ranch. They were then shipped to Denver and jailed. General Cook was able to interview Jim Reynolds before Chivington ordered them to be transported to Fort Lyon. Jim was unwilling to reveal the location of the stolen money and intimated he knew he and his gang would be killed on the way to Fort Lyon.

Sure enough, after camping at Russelville, the Reynolds gang prisoners were turned over to a new guard detail who marched them about five miles before eventually lining them up and executing them. One man left for dead, John Andrews, managed to survive being shot through the chest and hid out while partially recovering in an abandoned cabin. Andrews sent a message to a friend by way of a passing horseman and was eventually rescued. After his complete recovery, Andrews made his way down to Santa Fe in search of John Reynolds and Jake Stowe. 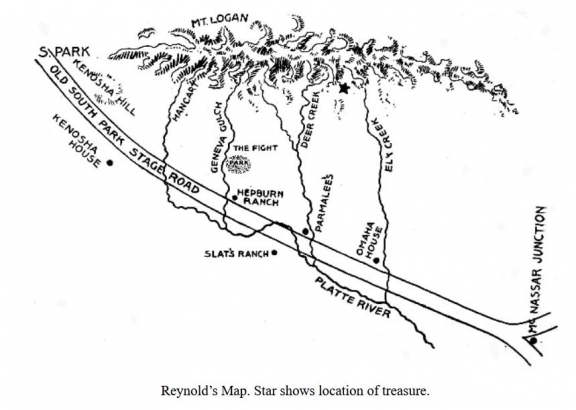 The Treasure Map ("Hands Up" by General D. J. Cook)

Buccaneers and Their Buried Treasure

Not long after their reunion, Reynolds, Stowe and Andrews returned to their outlaw ways and both Andrews and Stowe ended up dead after trying to rob some Mexican ranchers’ horses. John Reynolds managed to escape and changed his name to Will Wallace living as a gambler in the Santa Fe area for a number of years. In 1871, however, he again felt the pull of the bandit life and teamed up with one Albert Brown. Their adventures were short lived and Reynolds was mortally wounded by several Mexican ranchers he had sought to rob. Brown managed to get John to a safe space and comfort him as he died. Before his death, though, Reynolds is said to have drawn the map to the treasure seen here.

After Reynolds’ death, Brown made his way back to Denver and teamed up with his old friend, J. N. Cochran. Cochran was a former friend of John Andrews and knew the region depicted in the map. The two men tried repeatedly to find the buried treasure but to no avail. Brown eventually landed himself in jail in Denver for stealing mules. Before his escape, General Cook says he was able to obtain the map. Cook refused offers to buy the map and, instead, waited until it could be published in his memoir.

Many have attempted to find this treasure but none have reported its discovery. Perhaps, some intrepid readers of this story will pick up the mantle and strike out yet again for the loot. If you do come across some buried outlaw gold, we ask simply that you keep your local library in mind as a possible beneficiary of your good luck.

For those interested in more on the Confederate aspects of this story, check out Colorado Volunteers in the Civil War and A Confederate in the Colorado Gold Fields.

Great writing and a great story. Thank you so much for the research and write up.

Thanks for the kind words! Many of the best stories are true.

Thank you for a wonderful, and unknown peek into our past!

Thanks for the kind words, Thomas! Our state's history has no shortage of interesting tales. We hope to keep delivering them to you.

Be careful taking credit for plagiarized work. This is largely copied from my blog https://lifedeathiron.com/2015/04/26/exonerating-the-reynolds-gang-debunking-colorados-greatest-outlaw-legend/ which was printed in 2015. I do not mind people sharing these facts, but please don't take credit for work you didn't do.

Thank you for commenting and sharing your concerns. Accusations of plagiarism are something we take very seriously, but there is a large gulf between plagiarism and telling the same historical tale. Here is some more background on my research process to clarify where I found this information. While I was aware of your blog, it was not my first encounter with the Reynolds Gang and the lack of citations meant it did not provide a jumping off point for my research, which is the most fun part of writing these. As I’m sure you are aware, this story has been told many times, both before and after your blog was published. While the storytellers and researchers change, the facts do not. We see this in Rebels in the Rockies by Walter Pittman, Outlaw Tales of Colorado by Jan Elizabeth Murphy, and so forth. My real interest, however is getting closer to the source, so, like yourself (particularly regarding the images you used), I relied mostly on the memoir Hands Up by D. J. Cook, published in 1882. There was also the True History of Some of the Pioneers of Colorado, published in 1909. We also have, among my favorite sources, an extensive set of newspaper clipping files; I also used the priceless resource, the Colorado Historic Newspapers Collection. Of these, I utilized Rocky Mountain News articles from 4/20/1861, 11/21/1861, 10/11/1959 as well as some Daily Mining Journal articles from 1864 and articles from the Daily Colorado Republican and Rocky Mountain Herald in 1861. I hope this will assuage your concerns and inspire you to know that people will continue treading this historic ground for many years to come.

Great stuff! I am under the impression there was quite a purge of confederates from CO in 1861-62. Do you have info on that too?

PS I have a copy of “A Confederate in the Colorado Gold Fields” which seems to support the idea of a purge.

I didn't come across any formal, government purges, but there was definitely high-tension between Unionists and Confederate sympathizers within the state. I will have to sit down with the book you recommended as it is part of our collection.

I live near in elk creek and have found some evidence of old camps such as extremely rotten shelters and other things. Makes me think if they had used or built the structures