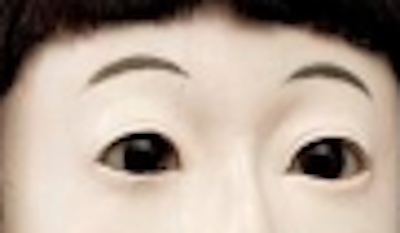 About a month ago, we posted a story about Miss Hamako Yokohama, the Japanese friendship doll which was gifted to the city of Denver in 1927. However, there are many rumors and tales regarding the doll which were omitted from that post. While there is no way to confirm that many of these events are directly related to Miss Yokohama, the available evidence strongly implies a correlation.

Perhaps the most significant element to the previous post, as it relates to this one, is the fact that the Friendship Doll came with a number of accoutrements, several of which have gone missing over the years. While some possessions have yet to be recovered, there are clues to when and where some of the items may have vanished, though the current whereabouts remain unknown. 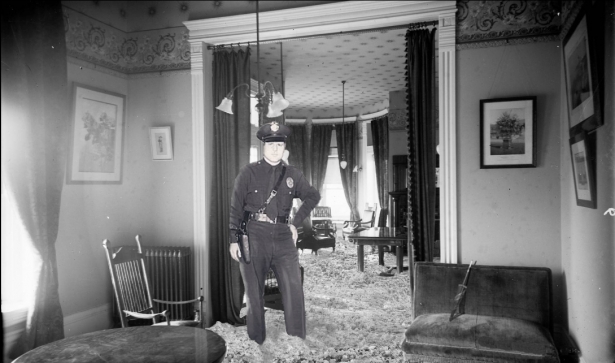 Officer V. “Jet” Spinner stands ankle-deep in flower petals. Note the miniature parasol on the settee to the right.

Reported on the first day of April in 1937, police were called to investigate what was believed to be a strange case of vandalism. Responding officer Victor Spinner, known as “Jet” among his fellow patrolmen, arrived at the home of Beau and Barbara Tyes just after 8 in the morning. Upon entry, he discovered that the ground floor of the residence was covered entirely with what appeared to be flower petals.

Investigation confirmed that they were indeed flower petals; more specifically, they were cherry blossoms from a Yoshino tree, a hybridized species of cherry tree native to Japan. The source of the flowers remains unclear.

Loads of blossoms were hauled away for incineration by the Department of Sanitation. While it was ultimately written off as an elaborate prank, possibly perpetrated by local college students, there are several inconsistencies which make that seem unlikely. For one thing, there was no sign of intruders, nor any indication of forced entry. In addition, as far as anyone has been able to determine, there were no Yoshino trees anywhere in the Denver area, raising questions as to how a group of mischievous college students could have acquired the petals, let alone such a significant number of them. Finally, the Tyes had no children, and Mr. Tyes’ profession as the owner of a feedlot was unlikely to draw the attention of prank-minded juveniles. 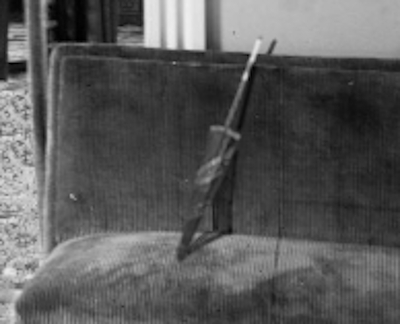 Closeup of the apparently child-sized Japanese-style parasol left on site.

Finding little to no evidence of who was responsible, or even how the act was perpetrated, the case quickly grew cold. While the parasol (shown above) was noticed at the time, it only added to the general sense of puzzlement. It was many years later that someone noticed the umbrella in this archival photograph, and realized that it appears to be the same one formerly associated with Miss Yokohama, which had gone missing around this time.

One lone article appears to be the only remaining clue as to the next Hamako-related “event.” This article ran in the Denver Herald News, several years after the end of World War II. Given the nature of the incident described, and the prevalence of bamboo in Japan and Japanese culture, it seems likely that this event could also be linked to the Friendship Doll. However, as far as is known, there were no artifacts found at the scene in this instance. This is the only known record of the occurrence, and the Herald News was known for its salacious style and propensity to occasionally stretch the truth. As such, it’s very difficult to make a connection with any degree of certainty. 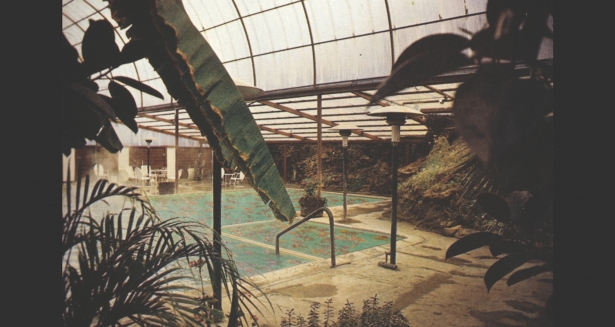 Digital scan of a photograph taken at the Indian Hot Springs pool by F. Lowry

Over two decades later,  in the spring of 1974, another unexplainable incident happened, this time at the Indian Hot Springs in Idaho Springs. Fred Lowry, a college graduate employed as a lifeguard, discovered during his opening duties that the communal pool was filled with fish. Specifically, it was filled with a particular type of carp called koi, which was (and remains) very popular in Japanese gardens.

Lowry immediately retrieved his disposable camera and snapped the above image. While he took a number of other photos, the steam rising from the hot pools quickly condensed on the lens, and unfortunately this image is the only one with any clarity. 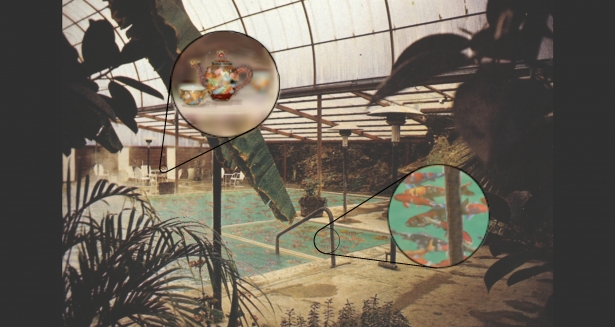 Scanning the original print allows significantly more details to be revealed, as illustrated in the image above. The callout on the right shows a much clearer view of the number, size, and density of the unexplained inhabitants. The callout to the left shows something only noticed recently, as the people studying the picture were invariably focused primarily on the fish. Barely visible on a table in the background is what appears to be an ornate Japanese tea set. Though the image is too blurry for confirmation, even with the enhancements it seems to be the same style as the set which initially accompanied Miss Yokohama. This set was confirmed to be missing during an inventory in 1976. 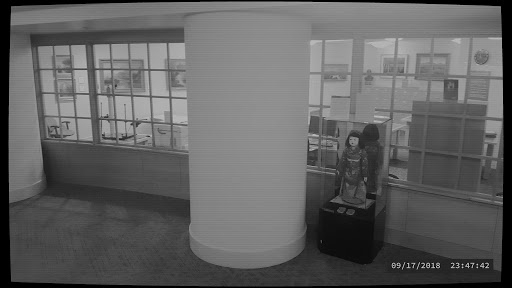 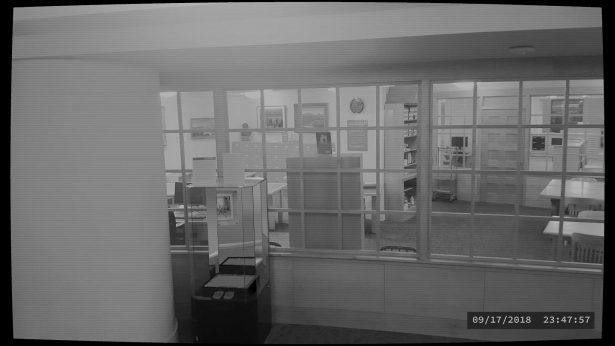 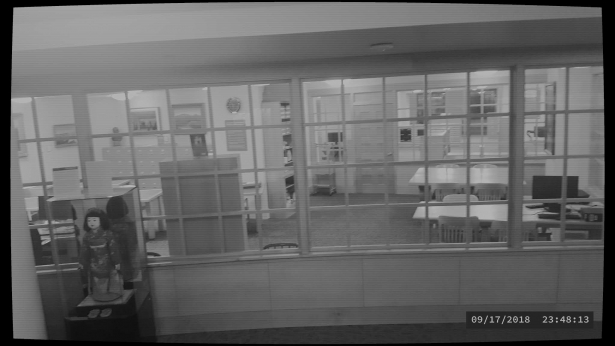 During a routine spot-check of archived security footage, the above images were discovered. On the night of September 17, 2018, for a period of approximately 30 seconds, Miss Hamako Yokohama seemingly disappeared from her case. This serves as the first confirmed instance where the doll itself revealed an unexplainable attribute. However, there were no reports of anything unusual which coincided with the doll’s absence from the display case. 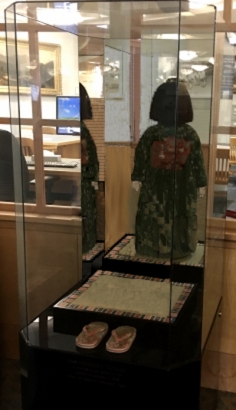 Magic Mirror, in the case...

April Phoulx, a patron visiting our department last December, snapped the above picture with her phone. It was only after she got home that she noticed something unusual, and even then could not wrap her brain around what she was seeing. While there didn’t appear to be anything unusual happening at the time the photo was taken, the end result is clear. Defying any attempt at explanation, the doll once again appears to be absent, but the doll’s reflections remained.

You have likely realized by now that nothing in this blog is actually true, and that it is little more than a flight of fancy and a parking spot for my decidedly amateur Photoshop skills. In fact, the entirety of this post is an acrostic, which will make the nature of this piece abundantly clear once uncovered. Hopefully it has provided a brief window of distraction and entertainment during these difficult times. For the actual history of Miss Hamako Yokohama, I strongly recommend reading the real story.

Please Note: This post represents a significant departure from our normal  blogging styles and routines. Please let us know if you’d like to see more stuff like this in the future. Thanks for your time!

Glad you enjoyed it!

One of my favorite patrons.

Thank you so much for this. I always avoided looking this doll in the eyes and my feelings have now been vindicated.

Many a poor soul has failed to escape her gaze...

Glad you enjoyed it!

What a fun read - thanks Chris!