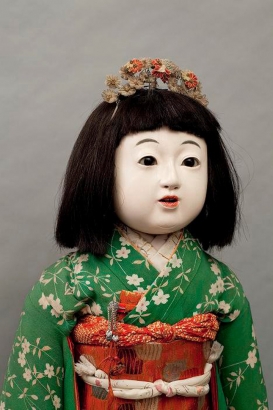 Since Fall 2018, the Department of Western History and Genealogy has been playing host to a rare Japanese Friendship doll.

The doll, known as “Miss Hamako Yokohama” is one of 58 large Ichimatsu-ningyo (Friendship Dolls) sent by the Japanese as a goodwill gesture to the United States in 1927. The 58 dolls represented various subjects and locations, such as the imperial household, the six largest cities, each individual Japanese prefecture and also regions and territories held by Japan. One doll was given to each state (48 at the time), with the remaining 10 sent to national museums. 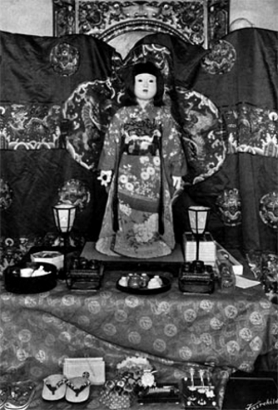 Each doll was dressed in traditional Japanese clothing and they are all approximately 30-32 inches in height. Their faces and hands were made from gofun. Gofun is a mixture of ground oyster shell and glue. Before departure, the dolls each received a passport and were accompanied by accessories, including lacquered furniture, tea sets, lanterns, folding screens, parasols, geta (raised wood sandals), and other personal ornaments.

As a side note, dolls are part of a rich tradition in Japan. Each year, the Japanese celebrate the tradition of Hina Matsuri, also called Doll’s Day or Girl’s Day. The day celebrates female children and prays for their continued health and happiness. During the holiday, also known as Momo no Sekku (peach festival), families display ceramic dolls dressed in the ornate, decorative robes of the ancient imperial court. The manufacturing of these figurines remains a thriving example of traditional Japanese craftwork.

Locally, Hina Matsuri will be celebrated on March 7 and 8, 2020, at the Doll and Culture Festival, sponsored by the Japan America Society of Colorado. 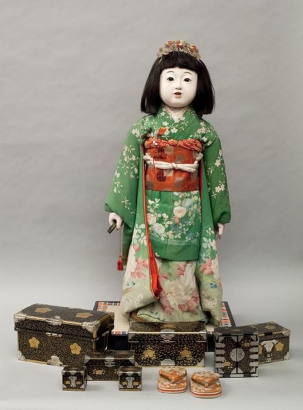 The doll that we have represents the Japanese city of Yokohama. Initially presented to the State of Colorado, she was then transferred to the Denver Public Library, where she remained for many years as a part of the doll collection in the children’s library.​ 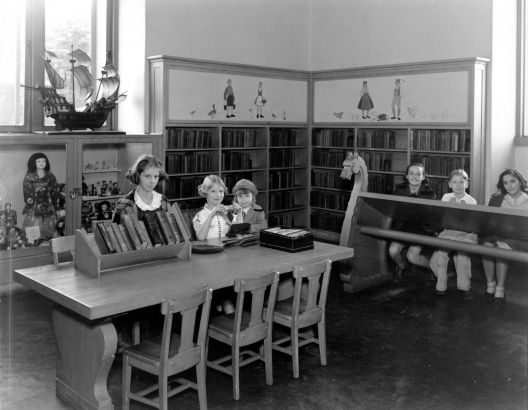 For many years, children visiting the library could play with Hamako, before she was finally put away in storage. She was rediscovered in 1994 when the Denver Public Library was moving into its newly-expanded facility. By that time, her face had a large crack, her hair was matted and her kimono had faded. 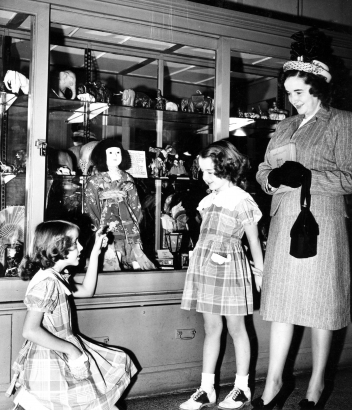 After rediscovery, the decision was made to donate the doll to the Denver Museum of Miniatures, Dolls and Toys (DMMDT). Miss Hamako Yokohama was then sent by J.A.D.E. (Japanese Asian Doll Enthusiasts) back to Yokohama, Japan, for restoration. Experts repaired the crack in her face and fixed her hair. Her kimono and obi were carefully re-dyed using inking pens.

The current director of the museum, Wendy Littlepage states, “Miss Yokohama is one of my favorite pieces in our collection. The breadth of stories this one object can tell ranges from the Japanese American experience in Colorado and the United States to the history of kimono. She frequently has visitors seek her out. It is always fun to talk with people traveling to see Japanese Friendship dolls.” 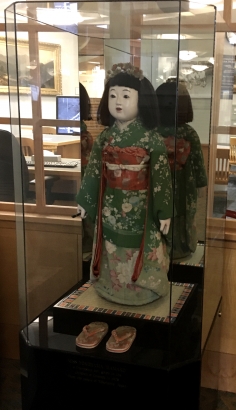 In 2018, the DMMDT vacated its old facility and began looking for a new location. Hamako was returned to DPL and remained in the Department of Western History and Genealogy during this time. Currently on display on the fifth floor of the Central Library, her display case was donated by an anonymous woman in Japan before installation at DMMDT.

She will be returning to the museum sometime in late April, just in time for the opening of the new home of the Denver Museum of Miniatures, Dolls and Toys at 830 Kipling Street, Lakewood, Colorado 80215. The museum is currently undergoing construction in preparation for its reopening sometime during early Summer 2020.

Of the original 58 Friendship Dolls sent from Japan in 1927, only 44 are known to still exist. Many that do survive are in poor condition. With the attack on Pearl Harbor on December 7, 1941, some dolls were either deaccessioned from their original collections or put into storage. While many of the dolls continue to remain within public collections, a number of the Japanese Friendship dolls have also found their way into private collections. It has been a treat to share this one with a whole new generation of fans.

Hello, thank you for sharing such a historical story of this. I enjoyed. By the way, it is Hina Matsuri, not Matsura though.

Thanks for pointing that out! It's been fixed.

Enjoyed both of the stories about the Friendship Doll. Thank you.

Glad you enjoyed them, Mary Beth! Thank you for reading.

The Denver Museum of Miniatures Dolls & Toys is NOW OPEN at their New Location at 830 Kipling Street, Lakewood, CO 80215.
They are open to visitors on Friday & Saturday from 10am-4pm and Sunday from 1pm-4pm. Visit dmmdt.org to purchase tickets.

That's awesome to hear, Jessica. Thanks for sharing!