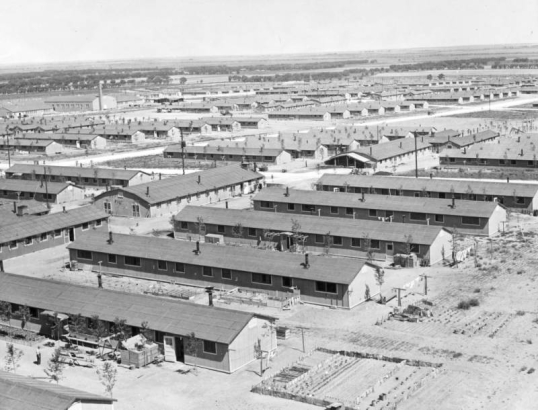 On November 5, 1942, Helen Fusayo Kawazoye and her husband Misao stepped out of their barracks at the Granada Relocation Center (the Amache internment camp), in Granada, Colorado, and mailed a letter to their friends Hiroji and Takino Hosaska.

Several days later and some 700 miles north in Wyoming, the Hosakas almost certainly stepped out of their barracks at the Heart Mountain Relocation Center to pick up the letter. Both families were composed entirely of American citizens who had neither committed crimes, nor had even been accused of any, but all were interned against their will in stark and isolated concentration camps. Their only "offense" was being born of Japanese descent and living within West Coast "exclusion zones" that had been designated under the notorious Executive Order 9066.

Over the next 80 years, that letter made its way to an antiques dealer in New Jersey, to another in Vermont, and ultimately to the Western History Collection at Denver Public Library (and somewhere along the way the Kawazoyes were incorrectly identified as the Kawazyes). 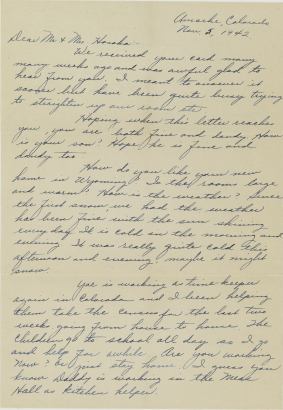 The letter, now cataloged as the Helen and Misao Kawazoye letter, 1942 November 5, is both brief and devastating in its simplicity:

We received your card many many weeks ago and was awful glad to hear from you. I meant to answer it sooner but have been quite busy trying to straighten up our room etc.

How do you like your new home in Wyoming? Is the room large and warm? How is the weather? Since the first snow, we had the weather has been fine with the sun shining every day. It is cold in the morning and evening. It was really quite cold this afternoon and evening, maybe it might snow.

Yae is working as time keeper again in Colorado and I been helping them take the census for the last two weeks going from house to house. The children go to school all day so I go and help for awhile. Are you working now? or just stay at home. I guess you know Daddy is working in the Mess Hall as kitchen helper. 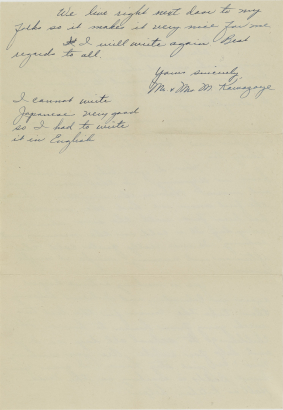 We live right next door to my folks so it makes it very nice for me.

I will write again.

Best regards to all.

I cannot write Japanese very good so I had to write it in English.

Absent from the letter is any hint of the ordeal the Hosakas and Kawazoyes had been through in preceding weeks and months, though that was certainly on everyone's minds.

Both families had been forced to liquidate whatever properties and businesses they owned and leave behind the lives they had built in Southern California for the cramped quarters of concentration camps whose construction would be largely the responsibility of its inmates. When they arrived at the remote gulags, they were housed in barracks that lacked privacy and, most of all, freedom.

Hiroji Hosaka was born in Japan in 1890 and moved to Hawaii in 1907 where he worked as a farm laborer, taxi driver, and other odd jobs. His wife Takino was born in Hawaii and briefly lived in Japan herself. They were married in 1914 and moved to California with their children in 1922.

In 1929, the Hosakas opened a boarding house called the Aloha Hotel in Los Angeles, which they ran right up until they were forced to sell it before the move to Heart Mountain. Hiroji details the move and the forced sale of the family business in a series of letters that are in a collection at California State University.

The Kawazoyes were both born in the United States and had lived in the Pacific Northwest before moving to Los Angeles. Fusayo (who sometimes went by “Helen”) was the child of Japanese immigrants who spoke and wrote Japanese, but had never visited Japan. Though she appear to have not finished high school, Fusayo worked as a secretary. Misao was also a first-generation American who worked as a lumber grader, among other occupations, and traveled to Japan various times.

Both were American families who had some familial ties to Japan, but were not particularly political or involved in anti-American activities of any kind. Misao Kawazoye was active with Japanese American community groups, some of which had the support of the Japanese government. He also had expertise in Japanese archery, which singled him out for extra scrutiny by his captors.

What stands out about these two families, and the letter they shared, was their ordinariness. In just 228 words, the Kawazoyes do their best to retain a sense of normalcy.

They make small talk, they update about the weather, and apologize for being too busy to write. They don't mention the injustices and indignities that they were being subjected to and would continue to experience until they were released in 1944, and that is part of what makes this letter such an important addition to our collections.

In the hands of a researcher who can present a bigger picture, this simple letter can illustrate a larger truth and paint an accurate picture of what life was like in the camps. Primary sources like this (and the Minidoka irrigator newspaper and the Minidoka interlude yearbook) establish facts such as the locations of the families and can confirm other details about what jobs the prisoners worked.Just as importantly, the letter provides testament to the humanity and dignity of American citizens whose government had betrayed them in the worst way.

Library customers are welcome to view the Helen and Misao Kawazoye letter at the Western History Reading Room located at the Central Library during regular hours.

I have a four page history which includes references about Camp Amache at Granada, CO. If you would like a copy, email me. Denver Public Library also has a copy.

Hi Jerry - Thanks for reading and commenting. I've sent you an email and look forward to hearing from you.

Thank you Brian for the nicely written blog article. I just stumbled upon this and believe it or not, I am the granddaughter of Hiroji and Takino Hosaka. This is amazing to see and it gives us insight not only into our family, but Japanese-American history, in general.