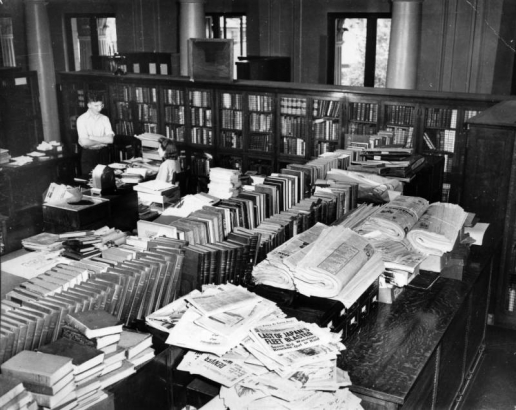 When you hear the term "Western History," what sort of imagery comes to mind? Do you picture American Indians hunting bison on the plains? Settlers of European origin plodding slowly across the grasslands in covered wagons? Maybe you picture a Mexican cowboy working on a ranch in the Southwest?

All of these images are accurate but, if you want to be truthful, add a lawyer with a pile of documents that pertain to a water rights case. You might also want to add an image of a technology worker parsing out lines of code in front of a computer monitor, a recently-arrived immigrant from Somalia going to work at a meat packing plant in Greeley, and maybe even a young mother dropping her kids off at daycare before heading to work at a downtown office. In short, the Trans-Mississippi West is a region where densely packed people and events have made history, as well as those that are currently making history.

The goal of the Western History and Genealogy Department at the Denver Public Library is to draw these disparate threads into a single collection that's relevant both to today's researchers and researchers who haven't even been born yet. Attempting to collect the story of the American West and its many players is an ongoing challenge that is useful to approach with an open mind and an eye on the future.

Collecting the West (Past, Present, and Future)

The Western History Department is fortunate to have a collection of archival manuscripts and printed materials that has been curated since about 1886. That's when the Mercantile Library (which was operated by the Denver Chamber of Commerce) first opened its doors to the people of the City of Denver. Some of the items that were housed in that collection are still with the Denver Public Library (which became an official city entity in 1889) today.

We've also benefited from the collecting prowess of Malcolm Wyer, the department's founder, who laid the foundation for the collection and whose influence is still felt decades after his death. It was Wyer's thought that Denver Public Library should expand its Colorado Collection to include the entire Trans-Mississippi West. Wyer's forward-thinking view of collection development left us with a collection that is incredibly relevant to researchers who weren't even alive in his lifetime. That's a legacy that we're trying to live up to today as we select manuscripts and printed materials to add to the collection.

Maintaining a dynamic collection is a balancing act that involves keeping one foot in the past and the other pointed towards the future. In practical terms, that means that the materials we collect today are going to be very different from the types of materials that Wyer collected. This is due, in part, to the changing nature of scholarship in the field in of Western History, as well as the dynamic nature of the people and issues that shape this region. The West is, and will always be, a work in progress.

This blog is the first in a series that will address the nature of the Western History and Genealogy Collection at Denver Public Library and the materials we collect in order to keep it relevant and useful for future generations of researchers. Up next: Thinking Globally, Collecting Locally.

This is a wonderful introduction to today's Western History collections, Brian! I think it's a common misconception that the scope of Western History can be fully represented by Remington sculpture. I, myself, had no idea that the ADA movement began largely here in Colorado until the Western History Department collected the Laura Hershey papers!