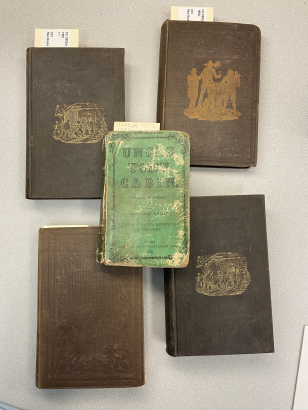 Uncle Tom's Cabin is one of the most successful—and controversial—books ever published. First published in book form in March 1852, it was an immediate success, selling 3,000 copies on its first day and 10,000 by the end of its first week. By late 1852, more than 300,000 copies of Uncle Tom's Cabin had been sold in the United States.

Unsurprisingly, the book was not well received by slavery's supporters, who suggested that Stowe's work sensationalized the treatment of enslaved people in the South. They also claimed that Stowe, an Ohio resident, couldn't possibly have known the real story. Stowe responded by publishing A Key to Uncle Tom's Cabin, in which she laid out the origins of each character in the book, many of whom were based on the accounts of freedom seekers, enslaved people who passed through Ohio after escaping. (Though she was also accused of lifting much of her material from enslavement narratives which were popular at the time.)

Perhaps the supreme example of the 'good bad' book is Uncle Tom’s Cabin. It is an unintentionally ludicrous book, full of preposterous melodramatic incidents; it is also deeply moving and essentially true; it is hard to say which quality outweighs the other.

Uncle Tom's Cabin wasn't just the bestselling book of 1852; it became the best-selling novel of the 19th century and was only outsold by the Bible, which had a 52 year head start.

In May 1852, publishers in the United Kingdom jumped on the bandwagon, producing multiple editions of the book and selling more than 200,000 copies that year.

At one point the book's American publisher, the John P. Jewett Publishing Company, had three presses and hundreds of workers producing copies of the book.

With so many copies of Uncle Tom's Cabin produced in 1852 (both authorized and unauthorized), honing in on a true first edition of the book is challenging. And that's exactly the challenge that our Special Collections librarians ran into recently when they came across four copies of the book in DPL's Rare Books Collection. All were published in 1852: one in the United States, and the other three in the U.K. 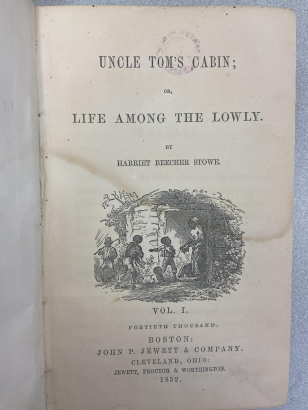 Uncle Tom's Cabin: The US Edition

Of the four copies of Uncle Tom's Cabin in DPL's Rare Books Collection, the U.S. edition (FIC S892un 1852), a two-volume set with six engravings, is the closest to a true first edition, but that claim comes with some significant qualifiers.

For starters, it wasn't part of the first two runs of 5,000 that were produced by John P. Jewett in the spring of 1852, which are generally considered to be the first imprint of the first edition. One of the reasons we know this because the title page includes the term "Fortieth Thousand." According to the American Bibliography of American Literature (ABL), volumes from that second run of 5,000 are marked "Ten Thousandth". Volumes with higher numbers are also first editions, but not first imprints.

Volumes from that first imprint also contain 20 distinct printer's errors which were corrected in later print runs.These errors do not appear in FIC S892un 1852, which is further proof that the title isn't from the first impression.

Minor distinctions like this may seem petty, but they are what make rare books rare, especially when you're talking about a book that sold as many copies as this one did.

But FIC S892un 1852 also has the name "Hobart and Robbins, Stereotypers" printed on the title page, and that's something that only appeared in the first editions of the Uncle Tom's Cabin.

Given that 50,000 copies of the book had been sold by June 1852, this copy is likely from the third or fourth impression and was probably published sometime between March and May 1852.

But John P. Jewett wasn't the only one printing Uncle Tom's Cabin. Across the Atlantic in the United Kingdom, publishers were getting in on the action—and that's where the remaining three copies of the book in our Rare Books Collection come into the story. 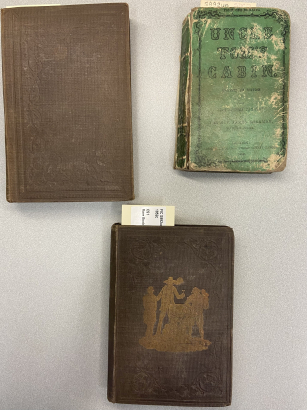 In the U.K., publishers were keen to get in on the action, but only Clarke and Co. of 148 Fleet Street had the official rights, which they secured after other, larger publishers passed on them. Clarke and Co.'s U.K. version first appeared in April 1852 with a note on the title page stating that it was reprinted verbatim from the tenth U.S. edition. It doesn't contain the printer's errors that appear on the first 10,000 copies (though its pagination is significantly different). In DPL's collection, FIC S892un 1852c does appear to be a true U.K. first edition.

Unlike the lavishly illustrated first run of the U.S. edition, the official U.K. edition of Uncle Tom's Cabin was published with no engravings, but did contain a preface by Reverend James Sherman, which was widely republished in the form of unauthorized copies. 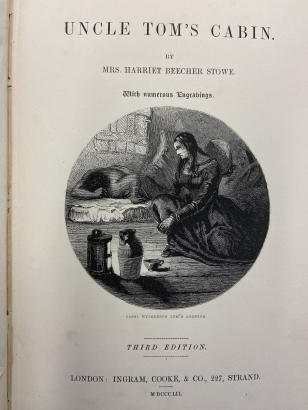 Unofficial versions, of which there were many, printed the book verbatim from authorized editions but often included engravings that were not in the original U.S. edition. These engravings sensationalized the book's most melodramatic moments with salacious images that played on the book's melodramatic themes. DPL has one of those unauthorized editions (FIC S892un 1852a).

Published by Ingram Cooke & Co., FIC S892un 1852a is a great example of a high-quality, bootlegged edition of Uncle Tom's Cabin and is "embellished with eight spirited engravings." It purports to be reprinted verbatim from the fourth U.S. edition and doesn't include printer's errors found in the earliest US editions. Though labeled as a "Third Edition" it's unclear how many copies or editions were produced by Ingram Cooke & Co. 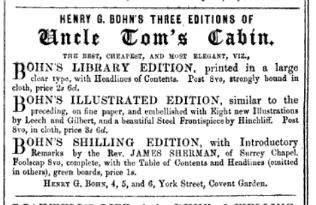 The final Uncle Tom's Cabin in the Rare Books Collection at DPL (FIC S892un 1852b) is a low-quality, mass-market edition published by Henry G. Bohn, with a cardboard cover and low-quality binding. Like John P. Jewett, Bohn published multiple editions of Uncle Tom's Cabin: a Library Edition, an Illustrated Edition, and the Shilling Edition, which sold for one shilling or about $0.15.

Because it was the 19th-century equivalent of the mass-market paperbacks you might buy at the grocery today, it seems that very few copies of this edition have survived. WorldCat shows only 13 libraries in the world, including DPL, have this edition. DPL is the only institution west of the Mississippi that has a copy. It's unquestionably the rarest Uncle Tom's Cabin in DPL's Rare Books Collection and is in extremely fragile condition. We found no copies of this edition on the collector's market.

While we don't know how DPL acquired this edition, there is a sticker on its inside cover from the Peabody Bookshop and Beer Stube, in Baltimore. Peabody's operated from 1922 to 1986, so DPL couldn't have acquired it before 1922.

DPL's various editions of Uncle Tom's Cabin represent just a fraction of the book's total publication. It's been continuously in print for more than 150 years, in and out of copyright, and copiously pirated. While the phenomenon of Uncle Tom's Cabin is a lightning rod for controversy, the physical objects at DPL tell the incredible story of one of the most significant titles in the history of publishing.

If you're interested in viewing copies of Uncle Tom's Cabin from the Rare Books Collection at DPL, please visit the Western History and Genealogy department's Reading Room at the Central Library.

Hi Brian, thanks for the background research. I'm sure you could write a book about such a controversial book.

Thank you, Peter! The publishing history and the social history of this title are intertwined and both are hugely significant in their own ways.

Thank you for this background and cultural information!

As a bibliophile and book collector, I appreciate your in-depth bibliographical analysis of DPL's five very early editions of Uncle Tom's Cabin. Western History is to be commended for providing a permanent home to rare books in many fields. This is to be contrasted with some public libraries' view that it's only the information that counts, and a digital copy is just as good as the original. This ignores the cultural and artifactual value of an original rare book, and the "secrets" often hidden in the provenance or annotations added to the original book by former owners.

Hi Joe - Thank you for the kinds words. Indeed, the publishing history of book can shed tremendous light on its cultural circumstances - and this title is a very good example of that phenomenon.