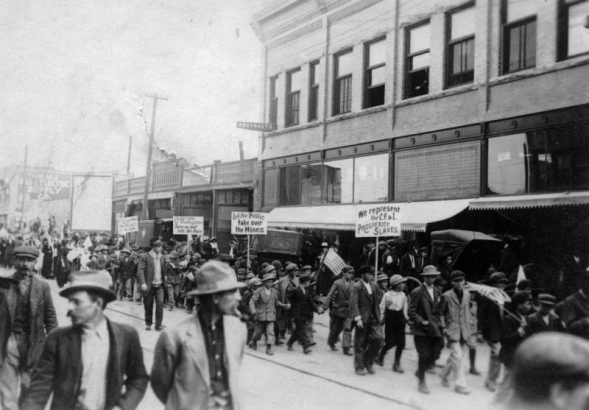 There's been a lot of talk about protest lately after Denver saw one of, if not the largest, protest in the city's 158-year history. The Women's March on January 21 was large, but it was hardly the first big protest the city or the state has seen.

Coloradans have taken to the streets time and time again over the decades, in much the way the young men in this picture of the Boy's March in Trinidad in the early years of the 20th Century did. Our photo catalogers guessed that this photo was taken in 1914 or 1915 and, given the labor strife that culminated with the Ludlow Massacre in 1914, that's probably a spot-on guess.

We don't know too much about the Boy's March, but if you zoom in and take a close look at the expressions on the boy's faces, you can tell they're very serious about what they're doing. Of course, it's pretty safe to say that these boys knew plenty of hardships during their childhoods and had plenty more rough times waiting for them when they were old enough to work in the mines.

The Coal Strike of 1914 ended quite badly, as did a similar strike at the Columbine Mine in Serene, Colorado (near Lafayette), in 1927. Despite the long odds, the miners, and other active Coloradans, have pressed forward in support of causes ranging from the end of military conflicts; to equal rights for women and homosexuals; the right to simply live on their own; to smaller marches in support of causes near and dear to a single neighborhood.

Take a look at the pictures in the gallery. Do you remember any of these events? Were your parents or grandparents there? Let us know in the comments section below or on our Western History Facebook page.

Photo Gallery:
"You can't have sex in a nursing home" protest sign from the 1994 ADAPT protest against the American Health Care Association 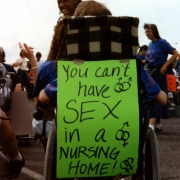 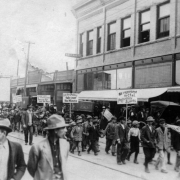 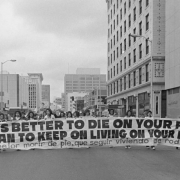 One of the signs says the children "represent the C.F. & I.," the Colorado Fuel & Iron Company. This was the company that owned the Ludlow mines. One of the reasons that particular incident gained so much attention nationally was that eleven children and two women died. The only person convicted of violence was a labor organizer named John Lawson. According to this site (with citations), there was a children's march through Denver's business section, led by Mother Jones, demanding justice for Lawson. This is likely a photo of that event.
http://www.dailykos.com/story/2015/6/7/1391163/-Hellraisers-Journal-Flag-of-Ludlow-Carried-as-Thousands-March-in-Denver-for-John-R-Lawson

Hi Jinnie - Thanks for your insightful comments. I wonder if it's possible that there was more than one Boy's March? Ludlow was a huge moment for labor and definitely ignited passions in the state. Thanks again!

There may have been other Boy's Marches, because child labor was certainly in full swing in some mines during this time. However, I don't think CF&I used child labor; indeed, they provided schools for the miner's children as both an attempt to ward off unionization efforts and also to inculcate a future work force. This being a anti-CF&I march with children indicates a strong tie to Ludlow.

Hi Jinnie - I think your takes on this subject are right on the money. Thanks for sharing them with us.

There are also some terrific images from Trinidad 1913-14 of a women's march supporting the Ludlow strikers, including the infamous national labor leader Mother Jones in the lead.

Hi Marcia - I was pretty overwhelmed at the number of really interesting protest photos in our collection. Selecting just a few good ones proved to be very difficult! Thanks for reminding us about the Mother Jones photos.