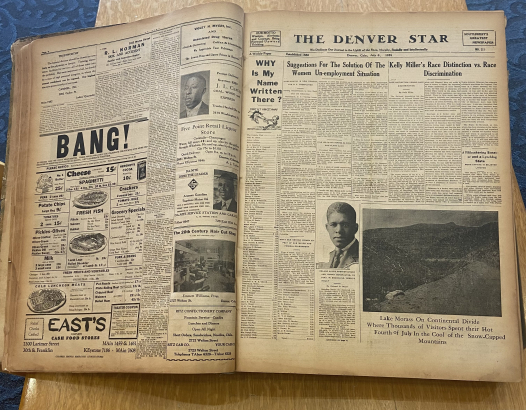 The Denver Star newspaper chronicled the activities of African Americans in the Mountain West in a way Denver’s other papers simply couldn’t (or wouldn’t) from 1913 to1963. That’s made the Denver Star incredibly useful to researchers who are trying to document how African American people lived in Denver, which events impacted their lives, and what they cared about.

While the Denver Public Library and other institutions have attempted to preserve the Denver Star, there have always been gaps in that record. Recently, the Western History and Genealogy department was able to fill in some of those gaps thanks to the generosity of Dr. Nancy Dawson, a retired college professor/journalist who currently resides in Russellville, Kentucky.

Dawson first approached DPL with an offer to donate a bound volume of the Denver Star covering 1934-1940 back in 2017. Her offer came with the condition that DPL microfilm, or other formats make these issues available to the public. DPL’s Denver Star holdings at the time included a gap from 1918-1937. Though many institutions offer access to the Denver Star via a database, very few have the actual papers, and no institutions had the year 1934 at all.

Our acquisitions librarians and archivists immediately accepted the offer from Dr. Dawson. Days later, the volume was shipped to Denver, where a long, but ultimately fruitful, journey began.

But the story behind this acquisition really began several decades ago when a 14-year-old Dawson walked into the offices of the Kansas City Call (another African American imprint) and told Marie Ross, one its editors, that she wanted to be a journalist. “...and that was the start of a long relationship,” Dawson said recently.

Ross wasn’t just the newspaper’s editor; she was the first African American graduate of the University of Kansas journalism school, and the niece of Denver Star owner, Albert Henderson Wade Ross (A.H.W. Ross of Rossonian fame). Marie and her brother Austin Ross both worked at the Denver Star in the 1930s and she had retained the bound volume since then.

When Ross was near the end of her life, she gave the Denver Star volume to Dawson with the promise that she would find a home for them. Dawson approached a number of institutions and was spurned time and time again. “Who wants to read that?” a professor from Southern University of New York told her while turning down her donation offer.

Through the years, Dawson remained persistent, a quality she attributes to her years as a working journalist, and carried the volume (which measures 23" x 17" and weighs about 25 pounds) as she moved forward with her professional life.

When Dawson connected with DPL, she’d found a home for the papers, but there was still a lot of work before her volume of the Denver Star would actually be accessible to the public. Digitizing newspapers for access through a content management system is considerably more complex than simply scanning the pages and hitting upload. It’s a labor-intensive process that requires specific technical skills, machinery, and money.

DPL made two separate, and ultimately unsuccessful, attempts at microfilming the volume in-house. The idea was that a machine, which was already in the library’s preservation lab, could be used to quickly and affordably create a microfilmed copy of the volume. That microfilm could be quickly digitized, as it’s much easier to digitize from microfilm than hard copies. After two failed attempts, the in-house microfilming option was nixed.

After an in-house effort at digitization was made, but proved to be more than the department’s limited workforce could handle, management was able to secure funding to have Dawson’s Denver Star volume properly digitized by an outside vendor. Shortly after that, the volume was made available to the public via partners at the Colorado Historic Newspapers Collection, and to the people of Denver in the reading room at Central Branch.

With that, Dawson’s long ago promise to her friend and mentor was fulfilled and an important piece of African American history was made accessible to the world.

Dawson’s volume of the Denver Star is available online at www.coloradohistoricnewspapers.org or for in-person viewing at the Denver Public Library’s Central Library.

This is great news! I love to read The Denver Star! . Essential reading for any Denver historian. Thank Ms. Ross for saving and Dr. Dawson for donating them.

DPL was very fortunate to have these and we're very grateful for Dr. Dawson's generosity and patience!

Wonderful. DPL,CHNC, and all others involved deserve a diamond-studded, platinum award for doing this.

Thanks to Dr. Dawson and Mrs. Ross for this important gift. Citizens of Denver are fortunate to have, in the DPL, an institution with the vision to recognize important treasures and the grit to find the resources to make them available to the public.