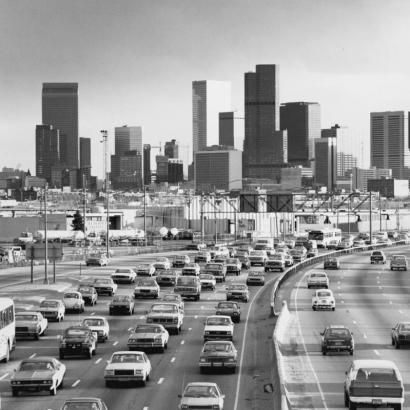 What’s the scariest place you’ll be visiting this Halloween? A haunted house? A darkened street? How about Interstate 25?

After reading Ginger Strand’s, Killer on the Road, Violence and the American Interstate, you’ll never look at an open stretch of highway or a truck stop parking lot the same way again.

Strand’s very readable prose tells the story of how our nation’s Interstate Highway system was developed and why it’s the perfect environment for vicious killers to practice their dark work.

Beginning with a detailed look at Charles Starkweather’s 1957-1958 killing spree on the back roads of Nebraska, Strand walks readers through the evolution of interstate travel and its special relationship with cold-blooded killers.

Along the way, Strand debunks much of what we think we know about highway-riding killers. As it turns out, they’re not quite as mobile as we’ve been led to believe.

Most, but not all, serial killers stick to a relatively small “hunting grounds” that include an Interstate highway for quick getaways. This stands in stark contrast to the image of ultra-mobile serial killers popularized in movies like, Natural Born Killers, and, The Hitcher.

Hitchin’ a Ride
Speaking of hitchhikers, Strand points out that hitchhiking is not quite as dangerous as it was made out to be by 1970's-era mainstream media. Back then, hitchhiking was pretty popular and closely associated with the counter-culture. It was also cast as the bogeyman and about the most dangerous thing a young person could do.

Popular magazines such as Reader’s Digest regularly published hitchhiking scare stories with dire warnings such as this:

In the case of a girl who hitchhikes, the odds against her reaching her destination unmolested are today literally no better than if she played Russian roulette.

Strand points out that a 1974 study from the California Highway Patrol titled, California Crimes and Accidents Associated with Hitchhiking, found that just 0.63% of reported crimes involved hitchers. So maybe Reader’s Digest and parents of that era were exaggerating just a wee bit.

(Of course Strand then goes on to detail multiple, grisly hitchhiker murders that will definitely curb any urge you’ve got to hitch a ride.)

Truck Stop Nightmare
Killer On the Road also has the potential to change the way you look at those sprawling truck stops that dot the Interstate Highway system.

According to Strand, truck stops are the perfect place for deranged cross country truckers to find the kinds of victims that no one will ever notice are missing. In doing so, she paints a scary picture of a transient world where killers kill and slip away into the night.

(She also points out that while there are more than 25 truckers doing time for truck stop murders, the vast majority of truckers are law-abiding citizens.)

This is the End

Killer On the Road is an ideal book for both researchers and true-crime buffs who want to learn more about how Dwight Eisenhower’s ambitious Interstate Highway program changed the face of our nation.

If you’re interested in learning more about the development of interstate travel or crime in the Trans-Mississippi West, come visit DPL’s Western History & Genealogy Department, located on Level 5 of the Central Library at 10 W. 14th Ave. Parkway.

Growing up on a farm backing up to I-65 Henry Lee Lucas confessed to killing someone on the road by our house. Pure evil those roads brought our way.