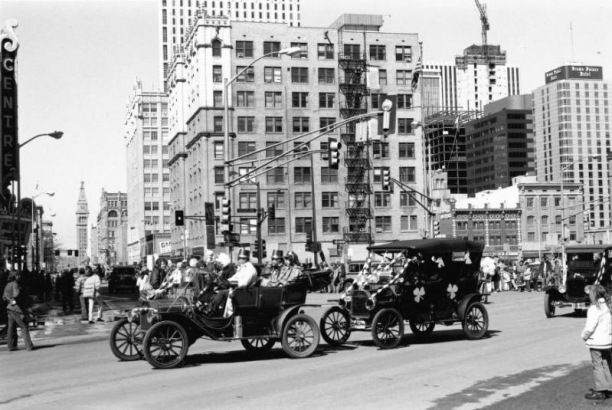 St. Patrick's Day is a holiday that elicits a wide range of reactions from Irish-Americans and their kin back on the Emerald Isle.

On one side of the argument are the folks who say St. Patrick's Day isn't even that big a deal in Ireland and should be treated as a religious event. On the other side of the St. Patrick's Day debate are those Irish who see the day as an opportunity to celebrate all things about their heritage and the deep connection they feel with the motherland.

The latter are the Irish men and women who attend Denver's annual St. Patrick's Day Parade, which will be held this year on Saturday, March 14.

According to Irish Denver by Dennis Gallagher, Tom Noel (who's also this year's parade Grand Marshal) and James Walsh, Denver's contribution to St. Patty's Day celebrations began back in 1883 with the blessings of mayor Robert Morris and the Pastor of St. Patrick's Church, Father Joseph P. Carrigan. Back then, parade festivities began with a grand ball the night before; a parade consisting of plenty of bagpipers and Irish civic groups; and a St. Patrick's Day mass at the end.

Denver's Irish community embraced the parade and made it an annual event right up until 1921. That's when anti-immigrant/Catholic sentiments in the city caused parade organizers to put the event on hiatus.

If you've lived in Denver for any length of time you've probably heard tell of the legendary Duffy's Shamrock Irish Bar & Grill and its role in reviving the parade. According to legend, a few Duffy's regulars breathed life back into the event by merely walking around the block on the 17th of March, 1962.

Apparently, that's all it took to get the people of Denver back in the St. Patrick's spirit. By 1963, an official parade committee put on a full-blown St. Patrick's Day parade that brought thousand of spectators downtown to see the spectacle.

There are other stories regarding the origin of the St. Patrick's Day Parade revival, and none of them can really be confirmed. One thing that is for certain, until it closed in 2006, Duffy's was certainly ground zero for St. Patrick's Day revelry in the Mile-High City. Every year, revelers lined up early in the morning on the 17th to ensure a good spot for the day's libations.

I remember Duffy Days well. You didn't dare wear a decent pair of shoes to Duffy's on Saint Patrick's day as a lot of green beer they served ended on the floor and it literally flowed around your feet. If you worked downtown, frequented Duffy's, or were just known to them in general you could knock on the door in the alley and using whatever form of persuasiveness you possessed (money, charm, etc.) ask to be let in instead of standing in line. As I recall, the Denver Fire Department held them to a high standard regarding the total occupancy of the restaurant. I worked at the old Denver Dry Goods Department store in the late seventies and still remember people literally falling down and being sick on the sidewalk from too much "celebrating." I also in those years saw a totally nude man walking down the middle of the street during sub-zero temperatures, but that's another story about another holiday.