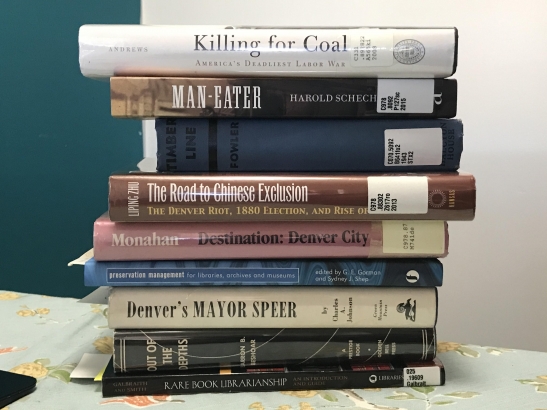 (During Denver Public Library's unprecedented, indefinite closure due to COVID-19, WHG librarians, archivists, catalogers, and shelvers are faced with a monumental task: maintain library operations without the actual library. We're up to the task and wanted to share our work stories with our WHG customers in an ongoing series of blogs. The first installment comes from Special Collections Librarian Brian Trembath, who describes how the closure forced him to inadvertently answer the question, "Which books would you take with you to a desert island?")

Friday, March 13, 2020, was anything but an ordinary day at the Denver Public Library's Western History and Genealogy Department. Staff members were fretting over when, or if, a closure would happen and managers moved from one hastily-called meeting to another. Then the word came; DPL would be closed for at least 30 days and employees would be asked to work from home whenever possible.

To say that circumstances moved quickly is something of an understatement, but there was the notion that I could be gone from the building for a very long time and would need some books from the collection to answer reference questions, create social media content, write blogs, and just kill the many hours of homebound life. (Though, to be clear, no librarian is being paid to sit home and read books.) With the permission of our department manager, I was allowed to take home a few books from the collection, books which normally would never leave the confines of the fifth floor of the Central Branch, let alone head off to a private home.

What followed was a real-life version of the old parlor game, which books would you take with you if you were going to be marooned on a desert island? (Albeit this version was done in a haze of fear and anxiety.)

So which books got thrown into the hastily-requisitioned tote bag that I used to haul away my quarantine reading and reference?

Generally, the books focused on Colorado history with a strong emphasis on Denver, although a couple of professional development resources made the cut, too. In my mind, I thought that I should grab books that I've wanted to read for awhile, but just didn't have the time to read. A couple are books that anyone who works in Colorado or Denver history should be intimately familiar with, plus one I had never noticed before.

Here's the list with a short explanation of each item:

Denver Streets: Names, Numbers, Locations, Logic, by Phil Goodstein (New Social Publications, 1994) - Before you laugh, please know that this is one of the best Denver history books ever written and is probably used to answer more questions at WHG than any other single title. Goodstein's encyclopedic work is a wealth of knowledge that we will use to craft social media posts and to answer reference questions remotely (we are still answering questions where we can!).

Killing for Coal, America's Deadliest Labor War, by Thomas G. Andrews (Harvard University Press, 2008) - This Bancroft History Prize winner has been on my list for a long time. Thanks to my coal miner grandfather, the Coalfield Wars and the Ludlow Massacre have always held great appeal to me. Given the significance of this era to Colorado history, it's a must-read for local historians. Also, every time I've wanted to read this book at home, I've realized that DPL has no circulating copies—just the copies we keep at WHG that cannot normally be checked out.

The Road to Chinese Exclusion: The Denver Riot, 1880 Election, and the Rise of the West, by Liping Zhu (University of Kansas Press, 2013) - Another Bancroft History Prize winner. This one covers Denver's notorious 1880 Anti-Chinese Riot in some detail and from a contemporary perspective. When reading about this event in older publications, like Jerome Smiley's History of Denver (1901), one gets the feeling that they're not getting the full picture. This book certainly fills in those gaps.

Man-Eater, The Life and Legend of an American Cannibal, by Harold Schecter (Little A, 2015) - There's so much more to the Alfred Packer story than what's portrayed in popular culture (I'm looking at you, Alfred Packer Days). Schecter's book focuses on Packer's trials and the efforts to release him in the early 20th century. I expect many myths to be busted in this title.

Timber Line, A Story of Bonfils and Tammen, by Gene Fowler (Halcyon House, 1943) - Timber Line tells the story of the Denver Post and Rocky Mountain News' early days. The funny thing about this particular copy of Timber Line, which was recommended by local historian Phil Goodstein, is that the last time it was outside the walls of the Denver Public Library was when the Central Branch moved from its former home in Civic Center Park...in 1956!

Destination: Denver City The South Platte Trail, by Doris Monahan (Swallow Press, 1985) - If you work at the Western History and Genealogy Department at the Denver Public Library, it's helpful to know as much about Denver's early days as possible.

Denver's Mayor Speer, by Charles A. Johnson (Bighorn Books, 1969) - Robert Speer was arguably Denver's most influential mayor, and his administration set the stage for the political machinations that are still with us today. (Full disclosure: I've read this one before, but a librarian at WHG can never know too much about Mayor Speer...who died tragically in the 1918 Spanish Flu pandemic.)

Out of the Depths, The Story of John R. Lawson a Labor Leader, by Barron B. Bashoar (The Colorado Labor Historical Committee, 1942) - See Killing for Coal.

Preservation Management for Libraries, Archives and Museums, edited by G.E. Gorman and Sydney Shep (Facet Publishing, 2006) - Let's be honest. Finding time to read professional development materials during normal business hours isn't easy. With fewer meetings (though we're still having our fair share via Google Hangouts) and other distractions, DPL librarians will definitely have the opportunity to hone their skills and bring back some new ideas when we eventually return to our various branches.

Rare Book Librarianship, an Introduction and Guide, by Steven K. Galbraith and Geoffrey D. Smith (Libraries Unlimited, 2012) - Did you know that DPL has an amazing, and quite large, Rare Books Collection? It's one of our special collections that hasn't seen a lot of daylight for the past few decades, but we're working hard to change that. For that reason, reading up on Rare Book Librarianship best practices is something that will benefit the library for a long time.

In the cold light of day, these selections seemed random. They're reflective of the black hole that DPL staff were staring into when we heard the news. The workplace we love, the customers we care about, and the co-workers who are such a big part of our lives would be gone for who-knows-how-long. But I'm fortunate because I do have many projects to work on from home. I'll be writing collection development policies, creating blogs (you may see some of these titles cited a lot pretty soon!), and ordering new titles for our collection, among other activities.

The fact is that DPL librarians would much rather be at our branches. But if we have to work from home, we're going to make the best of it by staying busy and being productive. Civic life is still happening; it's just shifted ground. And if we wind up finding out what our true desert island books are along the way? So much the better.

What would your desert island books be? Let us know in the comments section below!

And watch for more installments of How Do Librarians Work From Home in the days and weeks ahead.

So how does Harold Shecter say Packer’s first name was spelled in his book? Was it “Alfred” or “Alferd”?

Hi Ralph! Shecter generally uses "Alfred" though the tattoo on Packer's arm read, "Alferd". It's a debate for the ages! Thanks for the comment!

Did Alfred Packer attend the University of Colorado? Wondering how there came to be an Alferd Packer Days celebration. And why would college kids celebrate such a person?

Hi Mike - Thanks for the question. The first Alfred Packer Day at CU was in 1968, the same year they renamed the Roaring Fork Grill at the University Memorial Center in his honor. If I had to guess, given the time frame, it was an attempt at counter-culture humor. But it's a name that's stuck!

Very enjoyable blog post. Thanks and please keep them coming.
I ❤️ Libraries.

Thanks for the kind words, Eric! We're grateful for all the people who support public libraries and can't wait to see them all in person again!

thanks for an inspiring selection on Denver history; Goodstein’s _Denver Streets_ is in my collection but out of print and sells for ridiculous sums at the typical sources for such books; even though i have a copy, and it’s fairly well-organized, i sometimes wish it were searchable; has DPL considered digitizing out of print books and making them available for text searches by patrons? this book would be a great candidate for such a service (and yes, i understand there are copyright issues)

Hi Steve - Thanks for the kind words. Denver Streets is such a useful book (we actually snapped up the last two copies from Phil to add to the collection so we'd have copies for future generations!) We do try to digitize items when we can but, as you mentioned, those copyright laws are a hurdle. But we have digitized some great works like Jerome Smiley's History of Denver that are incredibly useful for researchers.

Dante’s Inferno translated by John Ciardi
The Western History room is a special place. It represents what is best in public libraries. Hopefully life returns to normal soon but in the meantime and as always your email newsletter is a fine read.
Thanks

Hi Edward - The desert island sounds like a perfect place for Dante! Thanks for the kind words on our room and email. We can't wait to welcome all of our WHG customers back! Take care.