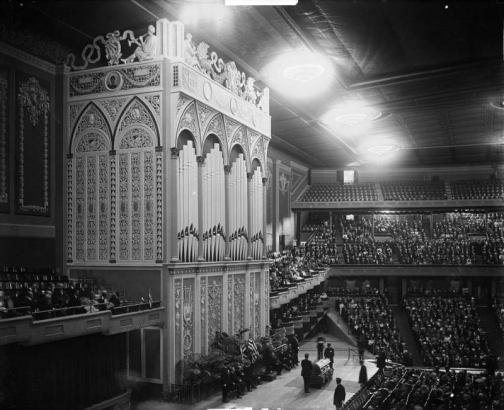 On May 14, 1918, the citizens of Denver were jolted with some very bad news - Mayor Robert W. Speer was dead after a two-week illness, according to the Elk Mountain Pilot. In the end, it was a case of double pneumonia that killed the mighty mayor.

Speer had already served two full terms as Denver's mayor (1904-1912) and was midway through his third term when he passed.

On May 17, 1918, the people of Denver gave their mayor a send-off that included a massive, but somehow still humble, funeral at the Municipal Auditorium whose construction Speer had personally overseen. In the photo above, the mayor's casket is dwarfed by the Auditorium's immense pipe organ and rests on a barren stage. "There was no pomp or display, no solemn dirges. The great organ that Mayor Speer had so recently installed played a soft undertone of grief," Denver Municipal Facts (DMF) reported. It was apparently at the Mayor's behest that the auditorium was bereft of any decorations, save crossed palms, and two American flags. 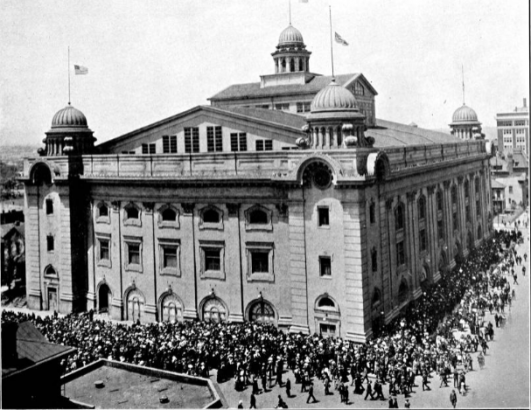 Crowds line up to view Mayor Speer in state

Speer's funeral was an astounding display of civic unity attended by at least 10,000 people of, "All Ages, Classes, and Nationalities," according to DMF. When the service concluded, the crowd quietly filed out of the building and lined up around the block to view the Mayor in state. Some waited hours for the chance to pay their last respects to the fallen mayor.

That the people of Denver held Mayor Speer in such high regard was not particularly surprising. Speer's terms were marked by a genuine regard for the people of Denver - and the list of projects benefiting them during his tenure is almost too long to list here. Among his many accomplishments were the development of both Denver's city and mountain parks, the construction of the Auditorium arena, free Sunday concerts and films, and the taming of Cherry Creek along the street that now bears his name.

Speer was also responsible for innovative programs such as a municipal coal department that provided low-cost coal to Denver's poorest citizens, as well as a municipal bakery that served the city's jails. The list goes on and on and, indeed, his imprint is still felt in the city today. 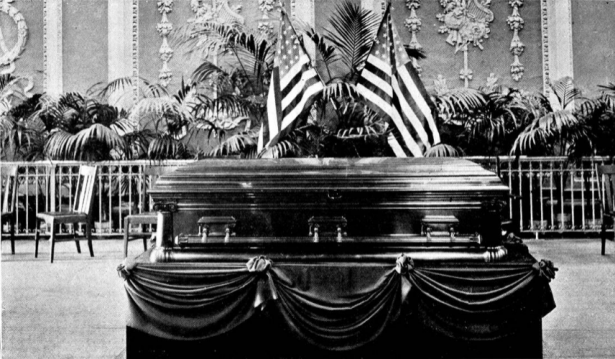 Given the time and cause of his death, it's worth asking, did Mayor Speer die from secondary bacterial pneumonia brought on by the Spanish Flu virus? That's a tough question to answer because, according to the Centers for Disease Control (CDC), no diagnostic testing for the Spanish Flu existed in 1918. Although the wave of Spanish Flu that hit the U.S. in September 1918 was much more widespread and severe, it is important to note that cases of flu-like illness were first detected in the United States in March 1918.

But, an in-depth look at death records from the city of Denver for the months of March, April, and May 1918 suggests that the flu may well have been the culprit.

According to the Denver Health Bulletin (which ran in DMF), for the months of March, April, and May 1918, approximately 20% of the 1090 Denverites who died in the city perished from some form of pneumonia or flu (though "flu" is only listed as the cause of death for one person each month). This seems like a high number and, indeed, it's slightly higher than the second biggest killer during that same period, tuberculosis (TB). TB accounted for 193 deaths or approximately 18% of all Denver deaths for that period.

It also seems likely that at least some of the people who were listed as dying from TB had actually died from the Spanish Flu or pneumonia. After all, the symptoms are quite similar and a case of flu that quickly turned to pneumonia may have gone unnoticed in a person who was already rendered weak from TB.

Speaking of TB, it was that deadly disease that brought Robert Speer to Colorado in the first place. In 1878, at the age of 23, the future mayor came to Colorado to recover from TB and stuck around for the rest of his life.

But given the fact that the Mayor was ill for two weeks and seemed to be recovering when he was stricken with pneumonia, it seems very possible that Speer was sick with flu that turned into pneumonia. Though at least one account at the time, from the Palisade Tribune, quotes his doctor as calling the illness "a cold" brought on by "overwork." Speer was known for clocking in extremely long hours in his office.

It's also worth noting that, despite his jocular look and large frame, Speer was not a man prone to vices such as strong drink. In fact, Speer was generally known as a teetotaler who very rarely imbibed alcohol of any kind.

Whatever actually killed the mayor, two things are clear: Robert W. Speer was well-loved by the citizens he served; and his legacy - in the form of Civic Center Park, Denver's Mountain Parks, and much more - remains a part of the Denver we know today.

I find it sad to read that 10,000 Denverites crowded together during the time of the Spanish flu. I imagine many contracted the flu and died after such close contacts in a large crowd

Hi Bob - Thanks for the interesting comment on Mayor Speer's funeral!

I'm wondering if he had any Klan connections, too?

Hello and thanks for reading - We've not run across any allegations of a connection between Speer and the Klan. He died a few years before the Klan revival of the 1920's.

It stood out to me that race was left out of the attendees.

Hi Sha - There wasn't a detailed description of the races of the attendees, only the phrase, "All Ages, Classes, and Nationalities."