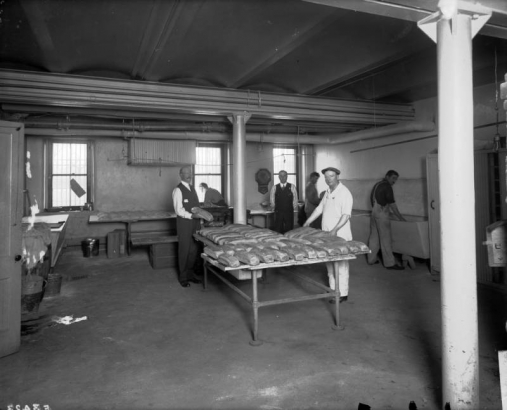 In 1917 Denver Mayor Robert Speer hit upon a novel way to both save on the cost of feeding inmates at the Denver County Jail and stay ahead of a worldwide grain shortage that was driving up the cost of bread.

Mayor Speer decreed that the city would open a bakery inside the County Jail that would produce enough loaves of bread to satisfy the City's demand on a daily basis. Even better, the Denver Municipal Bakery could act as a firewall against rapidly rising wheat costs, which presented a real threat to Denver's poorest citizens.

Opening the Denver Municipal Bakery was a move that illustrated Mayor Speer's grand vision for Denver as a thoroughly modern city ready to serve its citizens, as well as a politician's eye for the bottom line.

Housed in the county jail, which was then located at Colfax and Kalamath, the Denver Municipal Bakery was a major upgrade from the bakery that the jail had been using for years. For starters, it was overseen by City Councilman John Conlon, who was himself an established Denver baker. Conlon introduced professional baking standards to the jail with new baking equipment that ran the City about $400 (about $8,500 in 2018 dollars), according to Denver Municipal Facts.

From the get-go, the Denver Municipal Bakery was a success. In its first 11 months of operation the operation baked up a profit of $2,764.97, which is close to $50,000 in 2018 dollars. Besides efficient operation and new equipment, the bakery had a secret weapon for market success that no civilian operation could compete with; free/forced labor. In an astonishing nod to how much the world has changed in the past century, a December, 1918 article in Denver Municipal Facts danced right up to the 300-pound gorilla in the room saying, "The principle advantage which the Muncipal Bakery has over the commercial concern is that all labor, except that of the chef, is free labor, prisoners being used to advantage wherever possible."

While the City was a bit cavalier about the prisoner's situation, the bakery did provide some job training for inmates who were looking for a job skill that could be transferred to the outside. But prisoner rehabilitation was never really the point of the Denver Municipal Bakery. More than anything, the bakery was designed to be a hedge against the rising price of wheat, which was brought on by the onset of World War One, and it was part of Mayor Speer's bigger ideas for how city government should operate.

The success of these two bakeries [Denver's and New Orleans'], however, has been demonstrated and a new field of municipal enterprise opened that is worthy of more extensive development. Bread is the staff of life and the time may come when cities will have to step to the front to protect the public against extortionate prices for it, just as some cities were forced to purchase and distribute coal during the acute shortage of last winter.

The mayor's idea for a city government that more than dabbled in business was inspired by a 1911 visit to Dusseldorf, Germany as part of a tour celebrating the City Beautiful movement. Speer was impressed by the Dusseldorf city government's ability to collect revenue by operating businesses such as breweries and real estate enterprises. He reasoned that both the people and government of Denver could benefit from similar operations, and the Municipal Bakery was the best way to achieve that goal.

Unfortunately, Mayor Speer never got the chance to realize his dream of establishing a string of municipal enterprises in the Mile-High City, nor did he get the chance to save the people of Denver from a bread crisis of any kind. By the time the Denver Municipal Bakery was up and running, worldwide wheat prices had largely stabilized and Denver, fortunately, never suffered a food panic or food riots of any kind.

Even if the bakery had been called on as a last line of defense against inflation, Mayor Speer would not have been around to see it. He died in May of 1918 from pneumonia, likely the result of a case of the Spanish Flu epidemic that took more than 20 million lives worldwide.

As for the Denver Municipal Bakery, it faded into the workings of City Government taking the Mayor's grandiose dreams of city-run businesses with it.

This is fascinating. I've never heard this before and am amazed at the ingenuity of Mayor Speer.

I Helen - Thanks for the kind words. Speer had big plans for Denver which he, sadly, never got to see come to fruition.

At least it kept those prisoners from loafing around! It made me think of Dave's Killer Bread: https://en.wikipedia.org/wiki/Dave_Dahl_(entrepreneur)

It really was the yeast they could do.