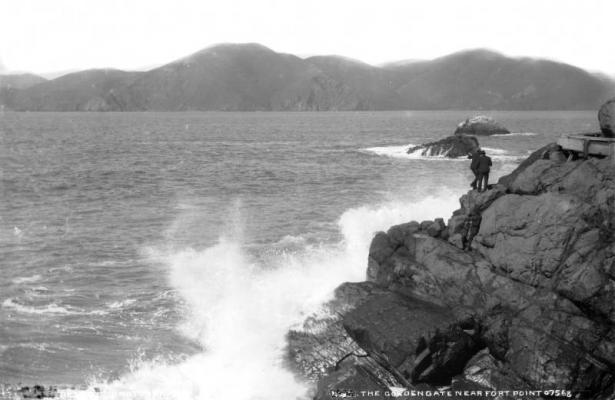 The unintended consequence is a theme that crops up over and over in the story of the Trans-Mississippi West. Time and time again, projects that were designed to move society forward come with a dark side their designers did not anticipate. One striking example of this phenomenon can be found on San Francisco's Golden Gate Bridge.

Since its opening in 1937, the Bridge has become one of the most visited bridges in the world and aided immensely in the Bay Area's economic growth. During that same period, at least 1,600 people have leapt to their deaths from that same bridge.

This phenomenon is outlined in incredible detail in John Bateson's 2012 book, The Final Leap: Suicide on the Golden Gate Bridge. Bateson, a mental health professional who works in suicide prevention, pulls the cover off the Golden Gate's secret world of suicides while offering both real-world solutions for preventing more deaths, and genuine hope for those struggling with thoughts of suicide.

A Dangerous Beauty
There's something about the Bridge's majestic beauty that exerts an almost magnetic pull on a certain cross-section of would-be jumpers. Many jump survivors (and there are more than you might think) say the bridge offers a clean and relatively quick death that spares loved ones from the shock of finding their bodies.
Sadly, they are wrong on all counts.

The impact of a body hitting against the water of San Francisco Bay from 250 feet offers anything but a quick, painless exit. Most people who survive the leap do so with multiple broken bones and extensive internal injuries. As for bridge jumps sparing anyone from the shock of finding a body, that's not exactly accurate, either.

Though many jumpers’ bodies are caught by currents and swept out to sea, most are not. That leaves Coast Guard sailors with the grim task of retrieving shattered bodies from the icy waters of the Bay. One anonymous Coast Guard crew member quoted in Final Leap said, "People choose to take their lives and it affects their families, but it also affects people like me who have to pick up what is left."

Surviving the Jump
Astonishingly, about one in fifty people who jump from the Golden Gate Bridge are pulled from the water alive. Their experiences make for absolutely riveting, and surprisingly upbeat, reading.

Bateson points out that of the 32 people who had been identified as jump survivors in 2011, only three went on to successfully kill themselves.

More typical are stories like that of Kevin Hart who said, "As soon as I jumped, I wanted to live." Hart and most of the other survivors have gone on to lead productive and happy lives.
In several cases, jump survivors found that simple talk therapy and other basic mental health services were all it took to turn their lives around completely.

Suicide Prevention on the Golden Gate Bridge
Despite the nearly once-a-week suicides from its walkways, the Golden Gate Bridge does not currently have any significant anti-measures, such as a net to catch leapers. This makes the Bridge the only significant structure of its magnitude not to have such devices, which have been on the Eiffel Tower for years. Though security cameras monitor certain parking lots and platforms for suspicious activity, they are used more for security than for preventing suicides.

The debate over installing nets on the Bridge has been mired in local political debate for decades with aesthetic purists claiming that nets would detract from the Bridge's majestic profile.

Plans, and the accompanying funds, for such a net were finally approved in June of 2014. The new net, is expected to cost around $76 million and should be in place within the next three years. Jumpers who land on the net will need to be retrieved by first responders and will likely still suffer a few injuries from the impact. Similar net systems in Washington D.C. and Switzerland have proven to significantly reduce the number of suicides by bridge jumping.

To a person, every one of the survivors interviewed for Final Leap were in favor of the net and most said the structure would have been all the nudging they needed to not go through with their plans.

With any luck at all, the new anti-suicide nets will restore the Golden Gate Bridge to its rightful place as a symbol of progress and prosperity instead of a destination for those who have run out of hope.

(If you’re struggling with thoughts of suicide, you can contact the National Suicide Prevention Lifeline at 800-273-8255 to be connected with local crisis counselors.)

Very informative blog post, Brian. Interested readers may also want to check out "The Bridge," a seemingly macabre topic that gets thoughtful treatment in this 2007 documentary.

what is the organization???

Hi there - We didn't see any organizations mentioned in the blog. Can you tell us more about what you're referring to?