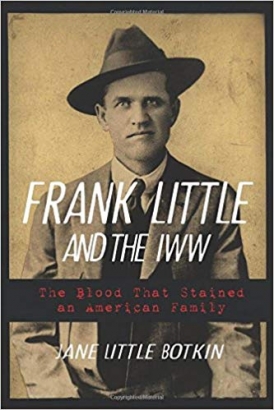 The staff of the Western History and Genealogy Department at the Denver Public Library are pleased to announce that Frank Little and the IWW: The Blood That Stained an American Family by Jane Little Botkin (University of Oklahoma Press, 2017) is the winner of the 2018 Caroline Bancroft History Prize.

Frank Little and the IWW tells the story of a union organizer from a humble background who terrified Montana mine owners to the extent that they hired a group of thugs to murder him. Little's corpse was left as a warning to others who might advocate for the men toiling beneath the earth in the mineral extraction business. Botkins' work is deeply personal as Little was her great-granduncle. He was a black sheep and his family never fully came to terms with his life.

In telling Little's story, Botkin also tells the story of life in early 20th-century mining towns and ably paints a picture of the travails that mining families faced as they struggled to scratch out a living in towns and camps where the mining company was a law unto itself. The Caroline Bancroft History Prize committee was deeply impressed with Botkins' research efforts and her ability to balance the objectivity of a historian and the compassion of a family member.

Frank Little and the IWW was not the only book the committee considered this year. Botkins' work was one of 49 titles our prize committee evaluated over the course of six months of regular meetings, discussions and plenty of reading. That original list of 49 included everything from deeply academic works including Morta Las Vegas: CSI and the Problem of the West; true crime books such as The Death of an Heir, Adolph Coors III and the Murder That Rocked an American Dynasty; and more whimsical titles like Beautifully Grotesque Fish of the American West.

Not surprisingly, the four finalist titles were all straightforward history books. Besides Frank Little and the IWW, finalists included Prairie fires: the American dreams of Laura Ingalls Wilder by Caroline Frasier (Henry Holt & Co., 2017); The Ghost Dance religion and the making of modern America by Louis S. Warren (Basic Books, 2017), which also named as an Honor Book; and The spirit and the sky: Lakota Visions of the Cosmos by Mark Hollabaugh (University of Nebraska Press, 2017). It's always a challenge for the committee to come up with a winner and, rest assured, there was no shortage of spirited discussions on the road to the final winner. That said, this is the first time in nearly a decade that a title whose subject resided in the 20th century has walked away with the prize.

Frank Little and the IWW is the 33rd winner of the Caroline Bancroft History Prize and its author will receive a $1,000 prize from an endowment left by Denver historian, socialite and library supporter Caroline Bancroft.

Have you recently read a Western history book that makes significant contribution to historical knowledge, presents thorough and original research, brings a new perspective to some well-known question, is of a high literary quality - and was published in 2018? Let us know in the comment section and we'd be happy to take a look at it.