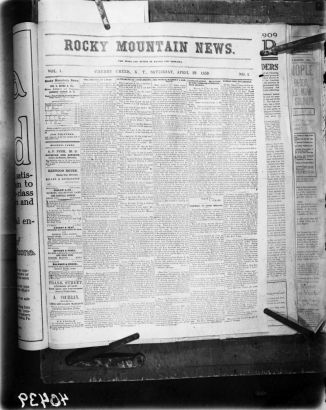 "I just found what I think is the first edition of the Rocky Mountain News. Would the library like it?"

This is a question we get at the Western History and Genealogy Department several times a year from big-hearted customers looking to help preserve our city's history.

Unfortunately, what these customers have always had (so far) is a staggeringly high-quality reprint of the Rocky's actual first edition, which was reprinted to celebrate the paper's 100th birthday in 1959.

So how can you be sure that the first edition Rocky Mountain News you ran across in your attic or in a loved one's personal effects is the real deal? And how come there seem to be so many of them floating around? Both questions have pretty straightforward answers.

The easiest way to tell if you've got an original or a reprint is to break out a tape measure and size it up. In its early days, the Rocky was printed on what's known as a broadsheet. That's the large format that the New York Times and Denver Post are still printed on. That original paper—and we've got one in our vault—measures in at a beefy 56 x 80 cm (22 x 31.5 inches).

By the time the Rocky was celebrating its centennial year in the Centennial State, it had switched over to the tabloid format that was a mainstay on Denver breakfast tables throughout the mid-century era. The transition occurred in the early 1940s to save on newsprint, and it became the Rocky's most distinctive feature. The anniversary reprint is identical to the original in every way but one—it measures in at 38 x 30 cm (15 x 12 inches) and is pictured above.

So why are there so many copies of the reprint floating around?

That speaks mainly to collecting habits of a bygone era. Before you could call up a digitized copy of the actual first edition of the RMN, like you can do right here, folks saved newspapers so that they could pass along history to their descendants. (This proclivity is best exemplified by the everlasting phenomenon that is the JFK assassination newspaper.)

Another reason so many of these reprints have survived is that Colorado's ultra-dry climate is ideal for preserving newspaper. If that paper was sitting in a closet in your grandmother's Denver brick home, chances are it's still in extraordinary shape. Over time, however, the actual original—which is made from pounded rag linen, as opposed to acidic wood pulp—will actually hold up a lot better.

We're also frequently asked how much these reprints are worth. By law, Denver Public Library employees are not allowed to provide appraisals. We can point out that one of the reprints is currently listed on eBay for $400 and is described as "scarce." Collectibles are only worth as much as someone is willing to pay for them. All we can say is that this particular item has been posted on eBay since 2018 and let you work out the specifics from there.

If you've got a copy of the reprint, and we've got some of our own, they're definitely fun items to have around. That first edition is an absolute treasure and provides a fascinating window into what life was like on the settlements surrounding Cherry Creek.

And if you're one of those folks who doesn't care for clutter, you can throw it away and rest easy in the knowledge that the actual first edition of the Rocky Mountain News—as well as copies of the reprint—are stored safely in the climate controlled-closed stacks at Denver Public Library's Western History and Genealogy Department. You can come by and see them any time we're open.

Well-written and clear take on the differences! I confess to having a few keepsake 'event' magazines still. You want 'em?

Hi Craig - Thanks for the kind words and the offer to donate those RMN's to DPL. We have a complete set on microfilm and hard copies running from the beginning into the 1940's. (But we only break those out for special occasions!) Thanks for reading and supporting DPL!

What is my original worth?

Hi Julio - Thanks for reading and commenting. Unfortunately, City of Denver employees are legally prohibited from providing this kind of appraisal advice. This work can be done by an appraisal professional (which we're also not allowed to recommend).

If you do have an original, be sure to keep it in a cool, dry place and consider purchasing a Mylar or other acid-free enclosure for it.