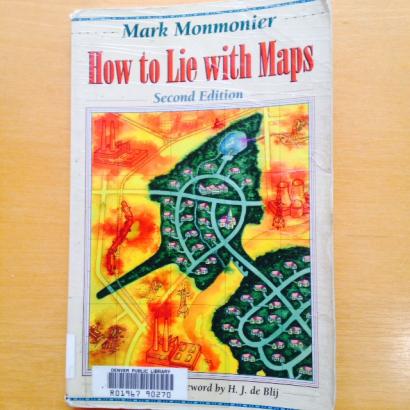 One perk of my job is that I’m constantly learning new things, usually thanks to being asked questions by library users. This week I had a really fun interaction that started with one of my favorite reference questions to date!

A summer writing camp group from the Metro Denver Promotion of Letters came to WH/G to talk about adventure and survival writing. These young women looked at and discussed historic maps, photos, and books of early Denver and Colorado to get a sense of setting for their writing. As the group was settling in to use our resources, one participant asked a question that I loved, “Are there any known paper towns in Colorado?” After a “Yay for John Green!” moment, we got down to the business of hunting for local paper towns.

Paper towns, made more well-known by author John Green’s novel of the same name, are a cartographer’s trick to deter copyright infringement of their work. The idea is that a cartographer will deliberately add a fictitious entry, be it a paper town, a trap street, or other cartographer’s folly, to a particular map. Then, if he sees his unique fake landmark used on another cartographer’s map, he will know that his work was stolen.

It took some searching, but this young writer and I were able to locate Mark Monmonier’s How to Lie with Maps, which gives several examples of these fictitious entries, including one right here in Colorado! Interestingly, in the early 1970s, a fake mountain peak appeared on some Boulder County maps. Mount Richard was on these maps for at least two years before being discovered, and is likely the work of Boulder County draftsman named Richard Ciacci. Whether Richard was trying to protect his work or just wanted a mountain named after him remains unknown.

Since the Western History/Genealogy department has multiple Boulder County maps, we started digging to find some from the 1970s. Jackpot! We found a Boulder County road map from 1971 with the fake Mt. Richard in the southwest corner of the county, right along the continental divide.

Whether you are interested in maps, Colorado history, John Green books, or just random trivia, this great question by a local youth led us to an awesome discovery. Thanks to all our visitors for taking us on daily adventures and teaching us something new.

cool
Thanks for reading, Bo!
Did you find all the Colorado research in Mark Monmonier book?
Good question, Eloise. Unfortunately, Hannah is no longer with us, but it certainly appears that everything that she references was from Monmonier's book.