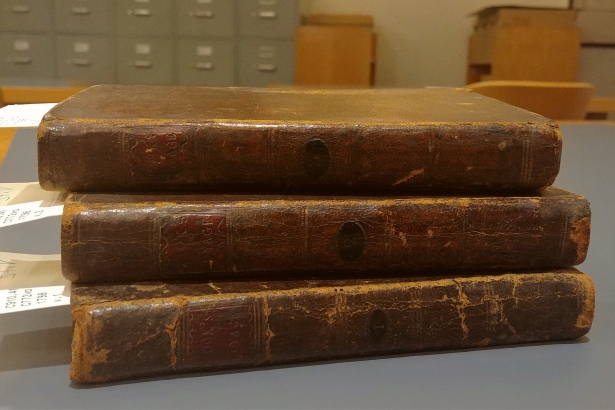 It’s hardly a secret that Western History and Genealogy has some pretty cool, one-of-a-kind stuff in our collections. We come here to let you know about it every week. We know that ours is an exceptional collection, but it’s another thing entirely to have the British Library come and tell us that.

In February 2018, Ann McDermott of the British Library contacted us regarding a three-volume set in our vault, Voyage to the Pacific Ocean by James Cook. The full title is  A voyage to the Pacific Ocean : undertaken by the command of His Majesty, for making discoveries in the Northern Hemisphere; performed under the direction of Captains Cook, Clerke, and Gore, in the years, 1776, 1777, 1778, 1779, 1780; compiled from the various accounts of that voyage hitherto published; in three volumes, but for the sake of efficiency we'll just call it Voyage to the Pacific Ocean. They were interested in adding this to the English Short Title Catalogue, a vast inventory of every surviving copy of letterpress publications produced in Great Britain and its former colonies, in any language, worldwide, before 1801. The reason Ann was contacting us was that we hold the only known copy of this printing in the world.

This isn’t exactly new to us. Many of our manuscript items, art pieces and even some government documents can only be seen at WHG. Additionally, published in 1798, this book is hardly the oldest thing in our collection. After all, we are home to 5,000-year-old Babylonian clay tablets, a leaf from the Gutenberg Bible and Interogatorium Sive Confessionale, a first edition Italian incunabulum* in its original 1474 binding. But those are stories for another day. 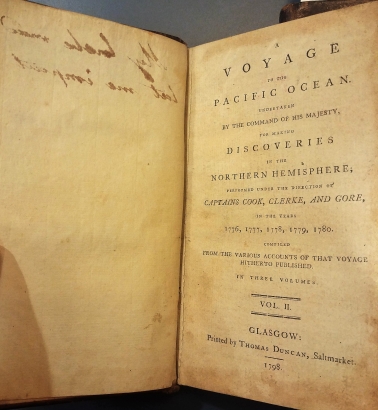 Today we speak of Voyage to the Pacific Ocean and the process of adding it to the English Short Title Catalogue (known colloquially as the ESTC). Typically catalogers like to have the item “in hand” to ensure quality description. Though the idea of escorting the book to London was bandied about (I was not the only one who offered my services), that was ultimately not a viable option. Thus began a back-and-forth email chain that pushed our catalogers into greater and greater descriptive detail and into a field of rare book cataloging that is rarely done here at DPL.

As Senior Catalog Librarian Craig Haggit described, the final record “is the result of MANY back-and-forth exchanges between us and them over the course of about 18 months (I lost track). For anyone that knows anything about the cataloging of rare books and manuscripts, doing bibliographical description via email is not easy. Each email response seemed to beget even more questions from the [British Library].” These started with a simple request for a scan of the title page and then became more detailed There were questions such as “Are there any illustrations? What type? Are they plates; if so are they folded? If you have time, could you count the number of plates in each vol.?" and they grew even more technical to "How many leaves in each volume follow the last signature?"** 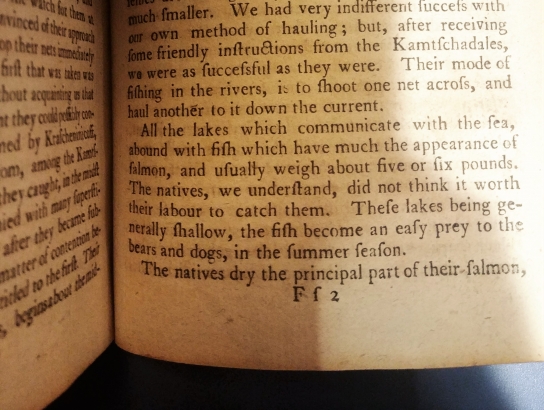 Example of a printers mark to indicate a new signature

After all the deliberation, a finalized record is now available in the English Short Title Catalogue, complete with the listing of Denver Public Library as the only institution with a copy. To see the difference in description, compare their record to the one in our catalog. Much of it is the same (we are describing the same thing after all), but the varied information about the item’s physicality is noticeable.

Interested in taking a look at these volumes or any of our other unique and very old gems? There is something special in all of our collections, from Colorado Authors to Douglas Fine Printing, from Western History to Genealogy. All of our books are available for study by the public, most without an appointment.

*Incunabula (plural for incunabulum) literally translates to “cradle” and refers to books from the earliest years of European typographic printing. Generally this applies to books printed before 1501.

**To understand what’s going on here, a bit of bookmaking history may be in order. Unless a book is very large (folio is the technical term), its pages will usually be printed on a larger sheet that is then folded to create a gathering or signature. These signatures are then stacked and stitched or glued to make the complete book. In early bookmaking, a small notation (usually a letter or sequence of letters) was added to the bottom of the first page in a signature. This would help the bookbinder, who may not have been literate, ensure that all of the pages were in order when they went to sew them together. Counting signatures using these letters is a major part of rare book cataloging as a reference to the book’s physical structure. It’s pretty unusual in traditional library cataloging.

"A voyage to the Pacific Ocean : undertaken by the command of His Majesty, for making discoveries in the Northern Hemisphere; performed under the direction of Captains Cook, Clerke, and Gore, in the years, 1776, 1777, 1778, 1779, 1780; compiled from the various accounts of that voyage hitherto published; in three volumes"

Dry as the desert. I'm sure it seemed like a good idea at the time.

Great article and wonderful to learn more about the DPL treasures.

Thanks for commenting, Sandy!

What a great post. The treasures in the collection are amazing and so is the staff.

Such kind words! Thanks so much, Sara.