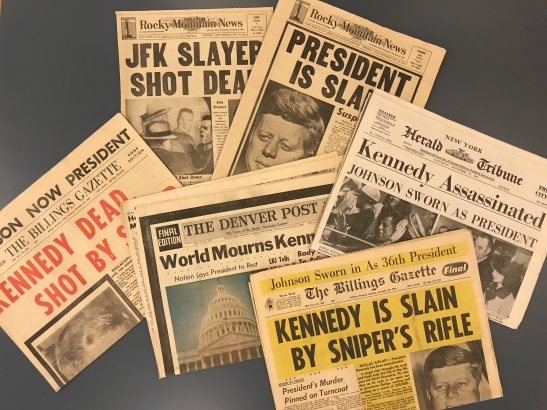 If you picked up a newspaper on November 23, 1963, the only story you would likely have read about was the assassination of U.S. President John F. Kennedy. That day, every newspaper on the planet cranked into high gear with special editions and giant headlines trumpeting the horrific news that everyone already knew.

The story of the President's tragic murder shocked the world and impacted Americans of all political stripes in a way that would be unthinkable today. Their horror was compounded the next day as millions witnessed the murder of Lee Harvey Oswald, the President's accused assassin, on live TV.

As the shocking news sank in, millions of Americans took those same newspapers and tucked them away in dresser drawers and back closet shelves as tokens of their grief and a nod to the historical events they were witnessing. This was, after all, a time before 24-hour news cycles, and most American households still subscribed to a local newspaper whose word was deeply trusted.

But as the years rolled on, a curious thing happened. Most people dealt with their grief and moved on, but they couldn't quite bear to part with the newspapers that trumpeted the horrific news in giant block letters that screamed out, "PRESIDENT IS SLAIN" and "KENNEDY ASSASSINATED."

Thus, the JFK assassination newspaper has become, for more than a generation now, a staple of family mementos and an item that most people simply cannot throw away. After all, an item that's been held on to for more than half a century has to be valuable, right? As it turns out, the JFK assassination newspaper has very little monetary value. It's simply the law of supply and demand. Since no one threw that paper out, it's quite common and, therefore, it's monetary value is low.

But that's a message that most Americans have never absorbed.

That's a lesson we learned here at the Western History and Genealogy Department back in 2015 when we published a blog titled, What's the Value of My JFK Assassination Newspaper? in response to the many phone calls we receive from well-intentioned library customers who want to donate a copy of their JFK assassination newspaper to the library. (In fact, while writing this blog we received a call from a man offering to donate his JFK assassination clippings.) The gist of that 2015 article was that, despite the strong sentimental value, these papers have almost no monetary value.

To the surprise of library staff, the blog has proven to be one of the most well-read articles we've ever published. Since April 2015, the article has been viewed 73,973 times and is regularly our most-read blog. The comments section has turned into a veritable marketplace where people from all over the country have posted offers to sell their own personal copies of the JFK assassination newspaper. (Whether anyone is actually buying them remains to be seen.)

But such is the mystique of, and emotional ties to, that horrible November day in 1963. In our collective memory, the world was a simpler place that morning. In 1963, there was a common thread to our collective information ecosystem. Most people got their news from their local newspaper or from one of three major TV networks. That newspaper, the one that's been entombed in grandma's closet, was a token of shared suffering, an object of real value. Its mystique has only grown as we've moved to a fractured information space where the version of current events understood and believed in one home could be radically different than the version their neighbors subscribe to. For better or worse, that's progress.

There is, however, a remedy for the paradox of the JFK assassination newspaper—but it's one that's going to be tough to swallow. In order for the paper to gain value, it also has to gain scarcity. So if most everyone who has one of the relics in their lives throws it away, the monetary value of the remaining copies will go through the roof. The question then becomes: does one help out other collectors by throwing their copy in the trash, thereby raising the item's scarcity and monetary value? Or does one hoard a copy in hopes that they or their descendants score riches in the future?

While copies of the newspaper about this tragedy are not valuable, JFK's campaign memorabilia can be highly valuable.

It's like anything that was produced in the tens of millions that are easy to store, value doesn't come from age, it comes from scarcity. Just like vinyl records, I have hundreds of them and people seem to think the collection is valuable, but it isn't because so many records were mass produced.

Incidentally, I too have a copy of the JFK assassination paper, published by the New Orleans Times-Picayune. I pull it out every now and then, look at almost everything except the Kennedy news, and revisit what society was like back then.

I have the newspaper for the day Binladen was captured by the Usa.
I would like a newspaper of JFKs assination and one from 9/11

I recently was gifted 6 news papers on the Kennedy murder. Mine is priceless .I also recieved the Nixon Ford changing of office and landing on the moon. I was a child and only a year old when Kennedy died. All I need to complete my collection is MLKjr. Head liner. Not to say I collect morbid memories but those events changed the world from as you say simpler times . But we're they really?