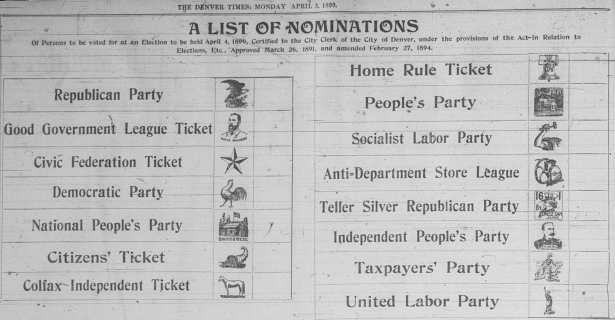 An interesting thing happened in Grand Junction, Colorado, in November 1909. The city began a new system of voting never before attempted in the United States. The previous April, Grand Junction had established a city charter that allowed for “choice voting.” Reports at the time claimed the system was based on observations of the New Zealand voting system. Grand Junction also did away with a system of city wards in favor of a commission in which commissioners would each have a level of executive authority over various aspects of city management such as sewers or roads.

While cities like New York and Chicago had long histories of partisan machine politics and the outsized power of ward bosses, communities of all sizes encountered similar problems to various degrees. This was a period of progressive experimentation and attempts at political reform around the nation. Predictably, talk of such reform attempts stirred interest in Denver and other communities around Colorado. 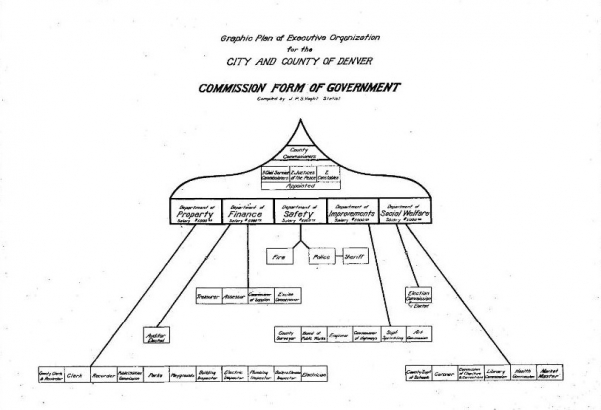 John B. McGauran was a Denver city council member and reformer with extensive experience in Denver politics. On April 3, 1912, he penned an editorial for the Rocky Mountain News laying out the basic procedures involved in the revolutionary system of preferential voting:

“Under the system every voter casts a ballot for the man  who represents his first choice. He can then register his preference, from among the other candidates,as to the man he would prefer should his first selection fail to receive a majority of “first choice votes.” His third choice enables him to his assent to the election of one of the other candidates, limiting his whole number of votes to one less than the total number of candidates. When the votes are counted, if no one candidate has received a majority of all “first choice” votes cast, the lowest candidate is dropped, and the second choice votes for each candidate are added to his “first choice” vote. If this addition gives a majority of the total vote to any one candidate, he is declared elected.”

A special election was scheduled for February 14, 1913, in which Denver voters would decide on preferential voting, as well as a commission-style city government. Non-partisan preferential voting carried the day with 15,601 votes in favor versus 11,012 votes against. The first application of this new system came in May of 1913. Unfortunately, the system meant to temper partisanship led to one of the most contentious administrations in Denver’s history. 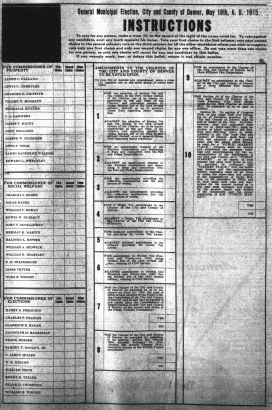 In 1923, Mayor Dewey Bailey was defeated by Klan-backed candidate, Ben Stapleton. Stapleton won by a mere 4,000 votes— only after votes were tallied on the third choice tier. By 1931, however, the same system ousted Stapleton in favor of George Begole by a mere 1,000 votes in an election that also had to go to a third choice tally. Just to add another twist to the story, Denverites showed up in record numbers in 1935 to elect Ben Stapleton yet again.

Within a few months of Stapleton’s 1935 victory, a petition began to circulate, calling to put to rest the preferential voting system. Similar petitions had circulated in the past, but in September 1935, voters decided to end the experiment and preferential voting was no more. At the time, some argued that the civil service protections of city workers disabled the power of big, political machines. Others pointed to the fact that the most middle-of-the-road candidates were not, necessarily, the best candidates. That said, it appeared to have the desired effect of breaking up perpetual incumbencies.

As we get closer to the 2020 election, there will certainly be more discussion on how to make positive changes to our election systems. We have already seen some similar systems adopted for elections in Maine and municipal elections in places like Telluride, Colorado, and San Francisco, California. As always, it’s helpful to have history to look back on to know what worked—and what didn't.

It's very important to recognize that this was a different method than is currently being pursued in the US today. That was the Bucklin method, which is terribly vulnerable to strategic voting and does not have the same majority guarantees. For more: http://archive.fairvote.org/?page=2077

Excellent point! The history of voting systems is one of constant evolution and we will continue to try and develop more democratic systems.

Fascinating post, Alex! I had no idea we had ever experimented with ranked voting.

Thanks, Laura. I was pretty surprised when I first heard about it.