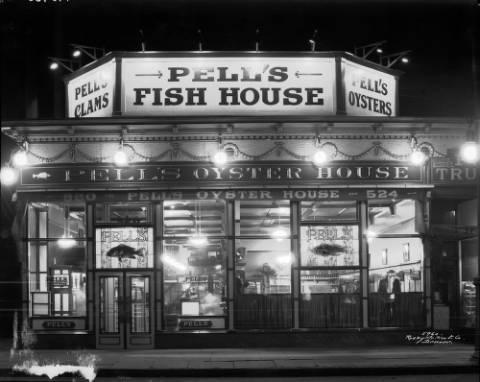 Why Was Denver Oyster-Crazed During The Late 19th Century?

Pell’s Oyster House was part of the Denver dining scene for 56 years. In 1881, George W. Pell moved to Denver from Brooklyn, New York, and opened his restaurant along Arapahoe Street, between 13th and 14th Street. Pell was no stranger to Denver—he had visited in 1870 while traveling with a circus, and again in 1879, when he operated a stage coach line with a final stop in the Queen City.

Denver—one thousand miles from the nearest ocean—may have seemed like an odd place for an oyster house, but during the oyster craze of the late 19th Century, “oyster saloons,” “oyster bars,” and “oyster and coffee saloons” popped up in cities and towns across the country. Denver had several of these establishments. The completion of the transcontinental rail line in 1869 certainly facilitated the popularity of the food, making it possible for oysters to be shipped more quickly than had been possible with horse-drawn transportation. Live oysters nourished with oatmeal or flour could withstand the long rail journey in water and ice-filled containers. Upon arrival, the shellfish were distributed to oyster houses that were often located in basements (in order to take advantage of naturally cooler temperatures).

Pell’s Oyster House spent the 1880s and 1890s moving from place to place along 16th Street before settling at 520 16th Street from the late 1890s until around 1921. An article appearing in the January 1, 1909, Denver Republican noted that the restaurant served oysters, fresh and saltwater fish, lobsters, crabs, and clams sourced from the Atlantic and Pacific Oceans, northern lakes, and inland streams.

A well-known proprietor in Denver, George Pell was considered eccentric and independent. He closed his restaurant every summer (perhaps heeding the popular notion of the time that oysters should only be eaten in months with an “R” in them) and never adhered to strict hours of operation. Pell detested smoking and did not allow it in the café section of his restaurant. He is said to have thrown a wealthy customer out by his coat collar after the gentleman lit a post-meal cigar. Pell died at St. Luke’s Hospital from a bout of “nervousness” on December 24, 1911, at the age of 60. His granite headstone at Fairmount Cemetery is fashioned with carvings of fish.

Pell’s Oyster House continued to operate, managed by Pell’s wife and son, George, Jr. In the early 1920s, the restaurant moved to 1514 Welton Street, where it was enlarged to seat over 200 customers. In 1923, George, Jr. died of a stroke at the age of 36. Mrs. Mary Sharp Pell died in an automobile accident in 1926. Pell’s Oyster House continued to operate under Sbarbaro & Williams, Inc. until Jesse Washburn of the RKO Hotel took it over in 1933. Washburn closed the restaurant in October 1937, citing high overhead costs and a marked loss of profitability.

To learn more about restaurants that were once part of the Denver dining scene, check out the Western History and Genealogy department's newspapers on microfilm, city directories, digital photo collection, and menu collection (C MSS WH1509).

Wondering if there is any connection to this other old establishment: https://www.captainpell.com/